The Ashes 2013 has been dominated by opinions and analysis of the top players from the two sides. However, critics and experts have seldom spoken about those rare players who have immense qualities and who have contributed in little ways to help the teams win games. With this in mind, Sudatta Mukherjee writes about the three most underrated and under-used Australian cricketers, who could have been used to help Australia win the Ashes. 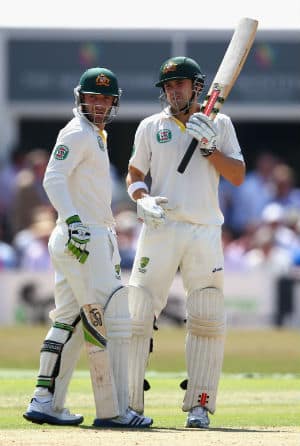 The Ashes 2013 has been dominated by opinions and analysis of the top players from the two sides. However, critics and experts have seldom spoken about those rare players who have immense qualities and who have contributed in little ways to help the teams win games. With this in mind, Sudatta Mukherjee writes about the three most underrated and under-used Australian cricketers, who could have been used to help Australia win the Ashes.

There are few Australian cricketers who are the future of their country’s cricket. However, these cricketers haven’t been used regularly to help them settle down in the team. They have been brought into the team when the management needed them to help the team get out of tough, crucial situations. Here are the three players, who have been totally under-used or not used at all by the team and in correct way:

It hasn’t been all that easy for the boy who grew up in a banana farm. A 21-year-old Phil Hughes made his Test debut against South Africa. In his very first Test he was dismissed for a duck by a short delivery from Dale Steyn. However, in the next innings he came back and kicked off his run tally in a stylish manner, hitting four off Makhaya Ntini. He didn’t spare Steyn and Morne Morkel. He smashed 21 runs off 33 deliveries that he faced of Steyn. From the 48 balls that he faced of Morkel, he scored 23 runs. He was eventually dismissed for 75 runs. But that wasn’t the end.

Hughes came back stronger. He scored back to back centuries against South Africa in the second Test match at Durban, becoming the youngest cricketer ever to achieve such a feat. But all wasn’t so sweet for the youngster. He was left out of the 2009 Ashes series as it was discerned by the selectors that he wasn’t able to play against the short ball. He was replaced by Shane Watson. Even after scoring an unbeaten 86 against New Zealand, later on, selectors decided to opt for Ed Cowan more and more. He has since been on and off in the playing eleven.

The Australian selectors regard him as a bright cricketer for the future, but have rarely given him time to settle down and prove his merit. He was dropped from the team after the second Ashes Test at Lord’s because he failed to score more than one in the both the innings. The selectors, although, forgot about his unbeaten 81 in the first innings of the first Test at Trent Bridge.

The Australian team failed collectively at Lord’s against England. It was unfair of the selectors to drop such a crucial player like Hughes. Even after being dropped, Hughes played for the Australians against Sussex at Hove. He scored an influential 84 in the first innings against Sussex. It is time that he is removed from the position of a back-up player and given a regular spot in the team to fulfill the wishes of scoring runs for the team.

An analyst for an investment bank, who did his masters in applied finance, Ed Cowan has not been able to apply his mind to secure a spot in Australia’s playing eleven. The 31-year-old was cruelly left out after first Ashes Test due to poor form along with a stomach illness. For a cricketer who has the record of scoring an unbeaten 218 in his first school match, aged 14, he has unfortunately almost always been on the firing line.

He made his Test century against India in 2011, at a time when he averaged 64.22 in First-Class cricket. He became the 18th Australian to score a half-century on debut. In that series, when India was famously whitewashed by Australia, he scored 206 runs from four matches, averaging 34.33.

The Tasmanian cricketer has been quite good whenever he has opened with David Warner. In 2012, in the first Test against Sri Lanka, Cowan was dismissed for four runs. He made sure he didn’t repeat such a feat by scoring 56, contributing largely with Warner in an opening stand partnership of 132. Australia won the match by 137 runs. Along with Warner in India, they achieved the highest opening partnership for Australia in India, scoring 139 runs.

He has been seldom criticised for not being able to follow-up good innings. However, one can also argue that the southpaw is just 18 Tests old. Steve Waugh scored his first century after playing 26 Tests. To argue more, Waugh experienced being a part of a winning team only after playing 13 Tests. If the selectors want to see Cowan shine, they have to let him play more Tests. And if anyone has to say anything about how much cricket is left in the 31-year-old, Michael Hussey made his Test debut at the age of 30.

Australia played James Pattinson, Mitchell Starc and Peter Siddle in the first Ashes Test. In the second Test, they dropped Starc and got Ryan Harris. In the third Test, they replaced the injured Pattinson with Starc, and in the fourth Test, Jackson Bird was given a run in place of Starc. Among the five pacers who have been used till now, Siddle and Harris have shown some form by picking up 16 and 11 wickets respectively before the match at Chester-le-Street.

The continuous changes in the bowling line-up have shown that the selectors doubt the abilities of the pacers, except Siddle and Harris. Coach Darren Lehmann was sort of happy that Australia didn’t have to play the final day of the Manchester Test, or else bowling the whole day would perhaps have made Harris unfit to play the fourth Test.

In such a situation, one would wonder why the selectors didn’t throw the ball to young James Faulkner. Yes, he has not made his Test debut yet; however, so hadn’t  Ashton Agar until a few days ago and look how well he performed in the first Test. Faulkner, who has the ability to swing the ball both ways, was regarded as a player who “gets things done” by selector John Inverarity. Then why not give him a chance?

Apart from being a crucial bowler for Tasmania, Faulkner is a talented lower-order batsman. His feats of 46 and 89, along with four wickets in the Sheffield Shield final in 2012-13 helped him earn the Man of the Match award. Nottingham was best suited for him. A hard and fast wicket suited his swing bowling. However, that wasn’t the scenario. Unless, he is given a place in the Australian side, the selectors will never be able to know Faulkner’s talent.

Australia has enough talent in their kitty. The main problem is they are unsure how and when to use it. Unless players are given enough chances and matches to play, all of the talent will go unnoticed and unattended to. The selectors need to mould the talent and shape them into bright future cricketers.