The scenes of England players celebrating a draw at the end of Old Trafford Test would have been an unlikely imagination at the start of the series. Aayush Puthran explains why beating Australia from hereon will be a much bigger challenge than what England would’ve expected. 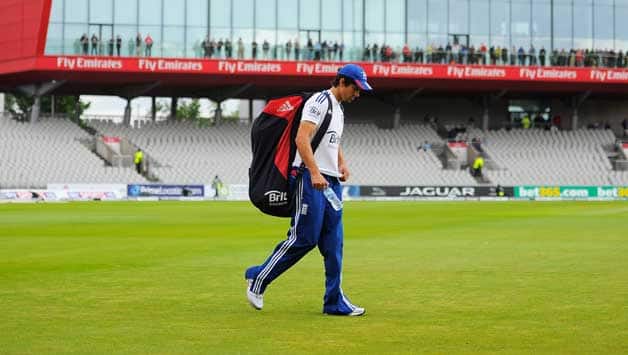 Despite retaining the Ashes, Alastair Cook’s men still have a long road ahead before they can outplay Australia © Getty Images

The scenes of England players celebrating a draw at the end of Old Trafford Test would have been an unlikely imagination at the start of the series. Aayush Puthran explains why beating Australia from hereon will be a much bigger challenge than what England would’ve expected.

“I couldn’t be true to either myself or my team-mates if I didn’t now say we’re going to win 5-0.”

The weather seemed fine in England for Glenn McGrath as he took back his words of a four-nil drubbing and predicted a whitewash after Australia won the first Ashes Test at Lord’s in 2005.

Those weren’t words of arrogance, but of belief as he spearheaded the pace-attack of the strongest cricket side of the decade against a team that was living on hype and old fancies of the game. Not many would’ve been surprised by his prediction then. However, what transpired over the course of the next four Tests is a part of cricketing folklore. A rejuvenated England side led by Michael Vaughan and an inspired performance by Andrew Flintoff helped England regain the urn in arguably the greatest Ashes series ever.

Quite the same place, today England find themselves in — a batting line-up where almost each player is a proven match-winner and boasting of a bowling line-up where each bowler can be counted on to run-through a line-up and make a significant difference in the final analysis.

So, it wasn’t surprising either when Ian ‘Beefy’ Botham predicted a 10-0 whitewash in the back-to-back Ashes series this year.

The visitors are playing a side that looks more like the England of ’90s. They don’t have a spinner who can be counted upon and whose role in the side is not more than slowing the pace of the game down. Quite like England of the earlier decade who didn’t have a counterpart to Shane Warne — the master who was bamboozling English batsmen. The same is the case with the batting line-up, where with the exception of Michael Clarke, no one else shows signs of being dependent enough.

On paper, they seem like the sides of the ’90s with the tables turned and the bodies switched!

However, for the Australians, there is one thing, and most importantly, that they have retained — the Aussie spirit. Like a generation inculcation of values, the hatred to lose seems like a virtue imbibed in their DNA. The hard-nut, arrogant approach surfaces every time they are down and the ongoing series has shown that better than it ever did.

Given the team that Australia had on paper, it would have taken something outrageously insane on England’s part to prove Botham wrong. With two fighting knocks in dire circumstances, Australia almost won the first Test that was dominated by the hosts. After handing over an easy victory to England at Lord’s, Australia came back strong enough to make England celebrate as the rain Gods showered no mercy on the team from Down Under. The English celebration of a draw spoke a lot about the circumstances, much like it did when Australia celebrated a draw in 2005 at the same ground.

Under the beer-loving, fun and not-so-cocky coach Darren Lehmann, Australia seem to have discovered that they are a much stronger side than what the papers and stats throw. While it gives Lehmann his moment of redemption, his style seems to have suited well to a side that is battling on and off-field issues. And Australia will soon come out of the series, minus the urn, but a realisation of what a virtue they have in the form of mental spirit of steel and resilience.

Irrespective of the result of this series, England will have to play out of their skins Down Under later in the year.