The Ashes 2013 was action-packed, tightly fought and certainly the 3-0 scoreline is not a true reflection of the competitive nature of the series. Sarang Bhalerao talks about some of the high points of the series. 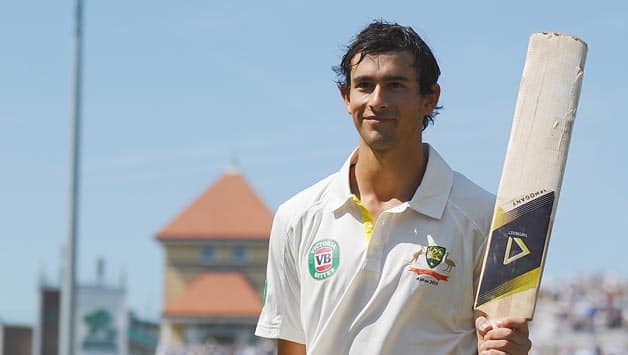 Batting at No 11, Ashton Agar scored 98 against England in the first innings of the first Ashes 2013 Test at Trent Bridge. This is the highest individual score in Test cricket by a No 11 batsman © Getty Images

The Ashes 2013 was action-packed, tightly fought and certainly the 3-0 scoreline is not a true reflection of the competitive nature of the series. Sarang Bhalerao talks about some of the high points of the series.

As soon as Ashton Agar made his debut ahead of Nathan Lyon as a lone spinner in the first Test, there were talks about his effectiveness? There were doubts about benching Australia’s premier off-spinner, but coach Darren Lehmann and the Australian team management backed the teenager. He didn’t catch the headlines with his left-arm spin; instead, his batting was the talking point. Batting at No 11, he scored a breath-taking 98 on Test debut that single-handedly saved Australia from registering an embarrassing score in the first innings at Trent Bridge.

This incident irked the Australians to such an extent that coach Darren Lehmann fired a barrage of verbal volleys at Stuart Broad. In the first Test match at Trent Bridge, Broad’s cut ricocheted off wicketkeeper Brad Haddin to Michael Clarke at the first slip. The Australians started celebrating but Broad stood firm. To the shock of the Australians, umpire Aleem Dar ruled Broad not out. The Australians had run out of the reviews and it haunted them as Broad scored a defiant half-century.

In the first Test match at Trent Bridge, James Anderson picked up 10 wickets which proved to be vital in the final analysis. His bowling single-handedly won England the game by 14 runs.

At Chester-le-Street, Broad’s six-for in the final innings helped England win the Ashes. The feature of Broad’s bowling hat was the reverse swing he generated in the final session on the fourth day that triggered a sensational Australian batting collapse, as the visitors lost nine wickets in the final session. Ian Bell was the leading run-scorer in the Ashes 2013 series with 562 runs. He also notched up three centuries and two half-centuries © Getty Images

Ian Bell scored three centuries and was the new Mr Consistent. He was instrumental in keeping the Australian bowling at bay and rescuing England from tight situations. He prevented the visitors from coming back into the series with his rich vein of form.

Ryan Harris was Australia’s Ashes Man of the Series. The 33-year-old missed the first game at Lord’s. In the next four games, Harris took 24 wickets at an average of 19.58. He bowled with a lot of purpose and always kept hitting the right channels.

Steven Smith showed his composure and class as a middle-order batsman. He scored his maiden Test ton at The Oval. He was one of the bright spots in the Australian batting line-up. Smith’s consistency saw him feature in all the five Ashes Tests. The six to get to his maiden Test ton off Jonathan Trott showed Smith’s confidence, and of course his talent.

The fighting, gritty century at Chester-le-Street on Day Two of the fourth Ashes Test was a determined effort. The conditions were not exactly good for batting. Chris Rogers, however, was patient enough to play the good balls and cash in on the loose stuff. He doesn’t have extravagant shots in his repertoire but what he has is truckloads of forbearance along with some 20,000 First-Class runs and 60 centuries to his name. Graeme Swann: The pick of the England bowlers

Graeme Swann took 26 wickets in five Test matches at an average of 29.03. The best bowling performance by the off-spinner was in the second Test at Lord’s where he recorded match figures of nine for 122. He topped the charts as the leading wicket-taker and promises to be a vital cog in England’s bowling department when England tour Down Under in November.

Shane Watson back in form with 176

This knock from Shane Watson showed his class as a batsman. He attacked the England bowling with a vengeance and took a particular liking in hammering debutant Simon Kerrigan. It took him two years and 48 Test innings to get a Test ton. But his form is good news for Australia who certainly took more positives despite 3-0 scoreline.

Anderson, Kevin Pietersen and Broad were answering nature’s call on the sacred Oval pitch as their teammates cheered the trio. This celebration irked many former players who condemned this behaviour. Shane Warne called this ‘crass and arrogant’.