Ashes 2013 Review: Hits of the series

Ashes 2013 Review: Hits of the series

While there were no doubts of an English win in the Ashes 2013, there emerged a couple of heroes for the home side who sealed the 3-0 win over the Australians. On their part, Australia’s struggle was evident throughout the series but they too found some heroes who provided them hope for the Ashes Down Under and further. Devarchit Varma takes a look back at the hits of the series. 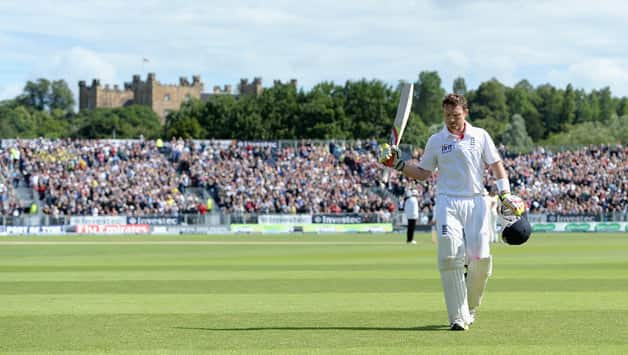 While there were no doubts of an English win in the Ashes 2013, there emerged a couple of heroes for the home side who sealed the 3-0 win over the Australians. On their part, Australia’s struggle was evident throughout the series but they too found some heroes who provided them hope for the Ashes Down Under and further. Devarchit Varma takes a look back at the hits of the series.

England’s third consecutive Ashes win has broadened the gap between the two arch-rivals. They have a far-more settled side, good bench strength and a very efficient coaching and support staff. All this combines together to contribute in an individual player’s success, as Ian Bell and, earlier, Alastair Cook learned after associating with Graham Gooch (England’s batting coach). Under David Saker, the English pace bowlers continue to thrive, especially at home.

Bell, James Anderson, Stuart Broad, Kevin Pietersen and Graeme Swann were the key performers for the winning home side. On the other hand, the Australians had their share of good performers as well in Chris Rogers, Ryan Harris, Peter Siddle, Steven Smith and Nathan Lyon. Let’s take a look.

With 562 runs averaging 62.44 in an Ashes series, Bell marked the best series of his career and his best phase in international cricket. Bell slammed as many as three centuries in the series to get his name registered in the record books alongside Maurice Leyland (1934) and David Gower (1985). It is not just that Bell scored three hundreds — the timing of each one of them had its own significance in the course of the game.

England’s second-highest wicket-taker in Test cricket lived up to the expectations and gave his side a crucial lead with his 10-wicket haul in the opening Test at Trent Bridge. He bowled tirelessly throughout the game and bagged the key wicket of Brad Haddin to hand England a narrow 14-run win, living up to the tag of ‘England’s bowling spearhead’. Though he was not at his usual best in the third and the fourth Tests at Manchester and Durham respectively, his 22 scalps in the five-Test affair puts him alongside Stuart Broad as the highest wicket-takers among the England pacers.

Australia were not meant to get any respite; when the England pacers failed to make a mark, Swann chipped in with his brilliant off-spin bowling and ended up as the highest wicket-taker from both the sides. Swann’s 26 wickets in the Ashes 2013 will mark his revival from the elbow injury, which kept him out of England’s tour to New Zealand. His five-wicket haul at Lord’s and the four wickets in the second innings helped England extend their lead to 2-0.

Just when the world thought that Australia were close to winning a Test in England on this tour, Broad produced one of the deadliest spells to pummel the tourist’s hopes at Durham. After Rogers and David Warner had put on a century stand for the opening wicket in a chase of 293, Broad turned up to grab six for 50 in the second innings and took his match tally to 11 for 121 at Chester-le-Street, and handed England the series win. Though he had his share of controversy by not walking back despite clearly edging the ball in the first Test, his 65-run contribution in a 138-run stand with Bell helped England consolidate their position in the game.

Honoured for his contribution to England on the fourth day of the final Test at The Oval, Kevin Pietersen remained the enigma that the world perceives him to be and a master class batsman that he is. Pietersen finished as the third highest run-scorer in Ashes 2013 with one century and three half-centuries, scoring 388 runs at 38.80. His resolute knock of 113 at Manchester after Australia declared at 527 for seven helped England force a draw, which was his best performance in the series. Not many tipped the 33-year-old injury-prone Ryan Harris to end up as Australia’s most successful bowler in Ashes 2013, but that’s what the reality is. Australia’s ‘Rhino’ spoke of the fear of flying back home early due to another injury, but he survived and survived well enough to play four Tests and grab 24 wickets in them, finishing as Australia’s highest wicket-taker. His control and movement of the ball troubled the England batsmen on several occasions, and he emerged as Australia’s biggest hope in the bowling department for the Ashes Down Under.

The Ashes 2013 turned out to be a career-defining affair for the New South Wales cricketer. His sudden recall to the Test side, his emergence as a handy batsman down the batting order and ability to trouble the best of the batsmen with his spin bowling — sparking an England collapse in the second Test at Lord’s ­— makes him a key player for the troubled side. With 345 runs in five Tests at 38.33, including two half-centuries and a brilliant century in the final Test, Smith has emerged as one of Australia’s batting hopes for future.

A surprised but a necessary selection of an experienced campaigner in form of Chris Rogers proved beneficial for the tourists. At a healthy average of 40.77, Rogers shrugged off a mediocre start to the series and brought up his maiden Test century in the fourth Test at Chester-le-Street. Rogers’s success in England should guarantee him a spot in the Ashes 2013, unless the Australian selectors decide to take any more obnoxious calls in team selection.

Peter Siddle bowled his heart out in all five Tests. He set the tone early on with a five-wicket haul on the first day of the first Test at Trent Bridge, showing Australia that the English batting order is not impregnable. Siddle bagged 17 wickets in the series and he’ll be raring to improve in the return series later this year.

Nathan Lyon featured in only three Tests for Australia, and claimed nine wickets in them. However, the most important factor is that Lyon showed that he is Australia’s best spinner at the moment and they cannot keep him out of action for long. His good show on a pace-friendly Chester-le-Street wicket proved that he has it in him to continue as Australia’s top spinner, and no more should Australian selectors make changes in that department.

Ashes 2013 Review: Michael Clarke’s declaration at The Oval was reckless