Australia turned back the clocks to the previous decade and re-lived another day of domination as they amassed a 500-plus total and picked up two important wickets in the dying moments of the final session to walk into their dressing room with the upper hand on Day 2 of the third Ashes Test. Prakash Govindasreenivasan chalks out the talking points of the day. 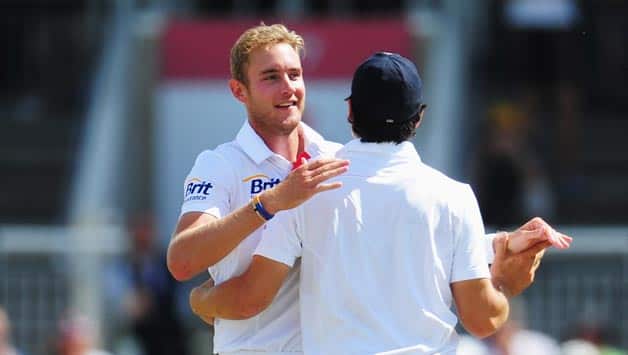 Australia turned back the clocks to the previous decade and re-lived another day of domination as they amassed a 500-plus total and picked up two important wickets in the dying moments of the final session to walk into their dressing room with the upper hand on Day 2 of the third Ashes Test. Prakash Govindasreenivasan chalks out the talking points of the day.

Often in his prime, when Switzerland’s Roger Federer has been a couple of sets down and destined to lose a match, he does something special. In the crucial third set his gameplay changes. He shifts gears and looks to intimidate the opposition with some fearsome tennis. The usually laid-back and finesse-reliant Swiss international covers more ground and rushes to the net more often than not.

With a magnificent knock of 187, Michael Clarke has had his Federer moment. His team has been down and out in the series and he has had his own troubles with form and a stiff lower-back. However, a do-or-die scenario has done his game a world of good. Continuing from where he left off on Day One, Clarke went on to score 187 runs. He was 13 short of another double ton but had done enough to put his side in a commanding position.

After being involved in a controversial decision and raking up an age-old debate of the ‘spirit of cricket,’ Stuart Broad finally managed to earn good repute in the ongoing Test series by joining the 200-wicket club in Test cricket.

It was great display of perseverance from Broad, who went wicketless for 30 overs and conceded 101 runs before bagging the big wicket of Clarke.

Off-spinner Graeme Swann entered record books at Old Trafford as he equaled Fred Truman and Derek Underwood’s record of 17 five-wicket haul in Tests. Swann provided England the most crucial breakthrough by dismissing Steven Smith, who had added 214 runs for the fourth wicket with Clarke.

Smith was looking to slog across the line and a top-edge went straight to Jonny Bairstow at mid-wicket. The comeback man David Warner was his next victim, who chose to review despite clearing edging a delivery. The ball bounced off Matt Prior’s thigh and went to the fielder at first slip. He then finished his fifer with a typical tailender wicket when Siddle tried to slog-sweep a ball from outside the off-stump and the ball missed everything and spun sharply to crash onto the wicket.

David Warner walked out to loud boos and failed to make an impact on the game. What’s worse, he wasted a review for Australia. Having clearly nicked a delivery from Graeme Swann, he discussed with his skipper Clarke at the non-striker’s end and went for a review. Replays showed a thick edge and Warner had to walk off. Going by the way DRS has shaped up in the series so far, one can’t blame him for trying his luck with the technology.

The 35-year-old Brad Haddin proved a point with yet another half-century as he and Mitchell Starc picked up from where Clarke left the innings and powered the side past 500. They orchestrated an unbeaten 97-run stand from 117 balls for the eighth wicket to mount further pressure on the home side. Haddin scored 65 from 99 deliveries while Starc scored at a quicker rate with 66 from 71 balls. Between them, they smashed 15 boundaries.

Following a declaration at 527 for seven, pacer Peter Siddle handed Australia a perfect start as he picked up two quick wickets to rattle the home side. Openers Alastair Cook and Joe Root started cautiously but Siddle destroyed Root’s concentration to dismiss him for eight from 57 deliveries. Siddle used the crease well to angle the ball into the right hander and it straightened after pitching. Root was glued to his crease and tried to defend the ball. In the process, a thin edge carried to Brad Haddin and England were one down for 47. Nightwatchman Tim Bresnan, who frustrated the visitors with a 188-ball knock of 38 in the second innings of the previous Test at Lord’s, failed to repeat performance. But, this time it was due to England’s inability to call for a review that cost them the wicket. Bresnan tried to pull a short delivery but missed and the ball went straight to Haddin. The on-field umpire ruled in favour of the bowling side and Bresnan walked towards Cook at the non-striker’s end for a chat. For reasons only known to the duo, a review wasn’t taken and Bresnan walked back after being adjudged caught behind for hitting nothing but thin air.

The day has ended with Australia clearly in the driver’s seat. Two early wickets have jolted the opposition and has put Alastair Cook in a spot of bother. Can he lead from the front on the third day and steer England out of danger? Or can Siddle come out all guns blazing and dent England’s line-up, much like what the big and burly Merv Hughes did back in 1993 at the same venue?

Pakistan and Sri Lanka to play series in UAE