Ashes 2015: Chris Rogers teaches a lesson in humility as he walks away from international cricket

Ashes 2015: Chris Rogers teaches a lesson in humility as he walks away from international cricket

Chris Rogers walks away not as one of the game’s greatest, but as one who unfortunately had a very short career.

He came, he saw, and he conquered.

For many years Chris Rogers would not have been wrong in assuming his international career would consist of a solitary appearance when Australia dropped him following the Perth Test against India in 2007-08; Matthew Hayden was making a comeback, and things were all right for the team which was still dominating the world. But when Australia stumbled to lowest of ebbs around 2013, having lost all faith in the young men who would take their cricket ahead, the 35-year-old resolute opener was called back into the national squad — totally out of the blue.

The fact that Rogers remained among the top five run-getters in all three Ashes series he played is not surprising. He finished in the top three twice on the lists. The Victorian left-handed batsman, on the brink of losing the state contract sometime in 2012, scored runs without trouble in both England and Australia. He played for Victoria in Australia, and represented four counties in England —Derbyshire, Leicestershire, Middlesex, and Northamptonshire.

Rogers smashed a double ton for Leicestershire against the high-flying Australians of 2005 Ashes, serving them the warning they refused to see.

Son of former New South Wales cricketer William John Rogers, Chris is an example for batsmen who are increasingly getting lured into benefits of the shortest version of the game. Rogers himself got frustrated with Western Australia for not getting enough opportunities in limited-overs cricket as he moved to Victoria, but little did he know that success awaited him in the longest version.

At 35 he was recalled into the national side as Australia sought sanity after being battered in all departments. They needed someone who would provide them stability and solidity, and there was none better than Rogers. He had scored more than 10,000 First-Class runs in England — more than in Australia in his career of 297 First-Class matches — and had no qualms in carrying the good run as he returned on the international circuit.  ALSO READ: Ashes 2013: Life starts at 35 for the gritty Chris Rogers

The records he created with David Warner — a batsman characteristically polar opposite to Rogers — will be tough to emulate. ALSO READ: David Warner and Chris Rogers: A beautiful opening pair Australia will miss after Ashes 2015

On Sunday, with Australia earning a consolatory win — which had no sheen with the Ashes already lost — another career ended. The game of cricket is poorer with the warriors in Kumar Sangakkara and Michael Clarke walking away, but not many realise that there was another man — a star who shone almost as bright as anyone in a distant universe — also calling it a day. Rogers’ retirement also made cricket poorer; it is deplorable that not many realised it.

Rogers’s career was not glorified with mountains of international runs, or with victories in countless battles. But his commitment was unmatched. He is colour-blind and suffers from short-sightedness. But the sheer numbers of First-Class runs he has garnered since his debut in 1998-99 tell Rogers never allowed his shortcomings to get better of him. The fact that at an age when most batsmen start thinking of retirement and lives ahead, Rogers managed to take his batting average close to 50, thus exemplifying the hunger, the character and the grit that he had.

Sunday, August 23, 2015 was the day when Michael Clarke played his last international match. The cricket world was swept by mixed emotions with Clarke walking away and England regaining the Ashes, and Sangakkara playing his final innings for Sri Lanka in another part of the world.

However, after the end of the inconsequential Test at The Oval, the Australian cricketers gathered to form the Guard of Honour for Clarke, and also for Rogers. ALSO READ: Chris Rogers, is it really your time to retire?

The 37-year-old surely would not have had many such moments of pride an honour.

“I have never been up here [in presentation ceremonies], so this is pretty special,” Rogers told Mike Atherton after he collected the Man of the Series award for Australia in the Ashes 2015. Indeed, it was the first time Rogers was there on the podium. Rogers remained full of humility, and whatever he said on an international arena for the last time reflected his personality. He took no sheen off England’s win and being completely aware of being a part of ‘Michael’s [Clarke] last Test’; Rogers did not miss out on mentioning that.

He did not miss out to thank England for what it contributed in his survival as a cricketer. Rogers had the chance to thank all four counties and their fans, though the world did miss in thanking him.

After all, there was a star cricketer retiring alongside Rogers. He was aware of it. For some Clarke is a great. Rogers knew the world would cry over the loss of a sprightly cricketer, a warrior, a man whose career glitters with many achievements. Who was Rogers, then?

A good old batsman who does crosswords, Sudoku, and word puzzles does not attract lot of fans — especially in an era when art of batting in Test cricket is increasingly being overshadowed by slam-bangers from shorter versions flocking the conventional format. Test cricket faces the risk of running out of men who know its true nature and value; Rogers was perhaps among the last of those.

Rogers also knew he would be lost as years would progress and new talents would bless the sport. A career of only 25 Tests does not do justice to a batsman who remained full of runs. He walks away not as one of the game’s greatest, but as one who unfortunately had a very short career.

Australia stand depleted — heavily — as they have lost an opener with the right qualities to excel in Test cricket. There is no one in visible sight across the length and breadth of Australia as competent as Rogers to fill the vacant shoes.

Rogers slipped into retirement as quietly as he passed through the Guard of Honour his teammates honoured him with, never to return, teaching many young batsmen across the globe — bewitched by Twenty20 cricket — the important lesson of humility.

Thank you, Chris Rogers. It was a pleasure watching you bat. Go well. 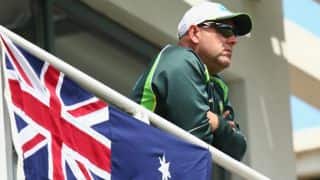