Australia were possibly expected to win Ashes 2015, if not as dominantly as they did in their backyard in 2013-14, but without much fuss.

Australia came in to the Ashes 2015 on the bank of an excellent run, winning the Border-Gavaskar Trophy 2014-15 against India, the tri-series involving India and England and ICC Cricket World Cup 2015. The tour of West Indies before Ashes 2015 for two Tests provided Australia ideal practice on slow tracks, but England surprised them with typical ‘English wickets’ in the later part of the series. Australia were blown away despite coming levelling the series after Lord’s Test. The team was termed ‘Dad’s Army’, for they consisted many players heading towards the end of their career; they were found wanting on the English shores.

This was the same side that had trounced South Africa in their backyard. Clarke’s men — barring Ryan Harris (retired just before the Ashes 2015) — weren’t expected to struggle the way they did in England. Ashes 2015 will be remembered as a mysterious one for the Australians who will be forced to think hard on what exactly went wrong and why.

Australia were possibly expected to win Ashes 2015, if not as dominantly as they did in their backyard in 2013-14, but without much fuss. Compared to England they had a well-settled unit, had the winning momentum, and the necessary firepower to win. England had won only one out of their last five series. But Clarke’s men failed to get their act together, failed to peak at the right time, ceded advantage to England on more than one important occasion, and in bargain, lost the Ashes. ALSO READ: Ashes 2015 5th Test at The Oval: Australia gave glimpse of what could have happened

If Australia underperformed in the first Test at Cardiff, they showed their might at Lord’s in the second with their 405-run win. But the real test came in the third and the fourth Tests at Edgbaston and Trent Bridge, where Australia were butchered. The fifth Test demanded them to play for pride and honour, and Australia turned up in the manner only they can, despite all the suffering. ALSO READ: Finally, Australia’s batsmen turn up

Inconsistency has become a trait of this team, which is one of the biggest reasons Australia lost the Ashes. Devarchit Varma explains how the Australian cricketers fared in the Ashes 2015, and gives them marks out of 10:

David Warner (7/10): Warner was far off from his usual self. Perhaps he chose the wrong time to change his approach to the game. In a bid to mellow down his aggression — being monitored closely by ICC — Warner became soft and feeble. He did get runs — 52 at Cardiff, 83 at Lord’s, 64 at Trent Bridge and 85 at The Oval — but the spunk and fire was missing. David Warner 2.0 can be a finished product a few months from now, and Australia can hope the change of attitude shifts into ability to make more runs.

Chris Rogers (8/10): The captain of ‘Dad’s Army’ had only one regret — of not winning The Ashes in England. Rogers finished as the second highest-run-scorer with 480 from five Tests at an average of 60. He scored one century and three half-centuries, but his failure on that horrifying Trent Bridge morning cannot be ignored, when Australia were shot out for 60.

Steven Smith (7/10): Smith, now in charge of Australian teams across formats, flirted with the world No. 1 ranking, dazzled with his 215 at Lord’s, and scored a match-winning 143 at The Oval. In between, his scores of 7, 8, 6 and 5 from four innings at Edgbaston and Trent Bridge played a massive role in Australia’s downfall. The tourists won whenever Smith made runs, but monumental failures in two consecutive Tests broke the heart of the Australian campaign. Smith’s technique came into question, as was his approach on tracks that assisted seam and swing. By now Australia and Smith have learned the hard lesson of why it is so important for key men to deliver when it matters the most. ALSO READ: Ashes 2015: Steven Smith’s century symbolises Australia’s inclination to go back to basics

Michael Clarke (3/10): Battered, bruised and finally broken, Clarke bade adieu to the game after a string of underperformances that refused to leave him after keeping his career alive with occasional sparks. Ironically, Clarke remained fit throughout the series, but could not manage runs. His nervousness against Stuart Broad was evident, and the old warrior in Clarke refused to wake up though the world cried out loud for its awakening. It was time Clarke took a call, and he did right by walking away from the game. ALSO READ: Michael Clarke lived by the sword and died by it

Adam Voges (4/10): Voges remained a mystery. He came into the series with a fine century in the Caribbean on Test debut, but Voges’ technique, like the other Australians, was exposed. It was heartening to see Voges fighting to half-centuries in lost causes in the fourth and final Tests, but he disappointed by not bringing in the value that he could have as a senior, experienced batsman.

Shaun Marsh (1/10): The elder Marsh kept demanding for selection with centuries in warm-up matches and in West Indies, but when the chance came, he blew it up. Marsh’s single-digit scores in Trent Bridge did no good to Australia and his future. He showed frailties on green wickets — something that should worry Australia going ahead as they look to recover.

Shane Watson (1/10): Watson was reduced to the butt of jokes when he continued to unsuccessfully claim for DRS appeals though the entire world knew he was out. He has surely played his final Test in England, and it is sad to see him being in that position. There also are some serious questions over his future, which only time will tell.

Brad Haddin (1/10): Haddin was unfortunate. His lifeline to Joe Root at Cardiff gave England the window and they pounced on it with a win. Haddin looked a pale shadow of himself with the bat and behind the wickets and played in only one Test. He is yet to officially announce his retirement.

Peter Nevill (8/10): Apart from that horrendous leave against James Anderson on Day One of the third Test at Edgbaston, there was hardly anything wrong that Peter Nevill did in his debut series. He was very impressive when Englishmen poked that he would struggle with lateral movement in their land but Nevill did an impressive job. His emergence has certainly settled Australia’s doubts over the heir to Haddin. ALSO READ: Ashes 2015: Peter Nevill looks like one for the future for Australia

Mitchell Marsh (6/10):  Marsh Jr may win a County contract with his bowling skills. As a batsman Marsh was horrible as he had nothing to offer in tough conditions. He did score a quickfire innings at Lord’s and chipped in with the wickets of Alastair Cook and Ben Stokes when they were frustrating Australia. Mitchell looked more dangerous in the fifth Test, and Australia must persist with him in the future.

Mitchell Starc (7/10): Starc was expected to do what he did for Australia in World Cup 2015, but he showed that he has areas to work on and has a long way to mature into a bowler who is as dangerous in Test cricket. Starc was Australia’s highest wicket-taker and the second-highest in the series with 18 scalps, but these wickets do not count much when indiscipline and inconsistency play a strong role in his team’s defeat. ALSO READ: Why has Mitchell Starc not flourished in Tests the way he has in ODIs?

Mitchell Johnson (5/10): If Johnson would be unplayable for few minutes; he would soon slip and disappear into mediocrity. There were flashes of brilliance — wickets of Jonny Bairstow and Ben Stokes on brutish deliveries on the second morning at Edgbaston, and his performance on a flat deck at Lord’s, equally backed up by the runs his batsmen garnered. Johnson did not resemble the same monster that affrighted England in his backyard; he looked like just another man who could bowl at pace. He got 15 wickets in 5 Tests and even scored a few runs — more than those in that famed middle-order —  but the biggest win he registered was over the besotted English fans, whom Johnson tackled brilliantly. ALSO READ: Ashes 2015: Starc carrying Australia all by himself; Johnson and Hazlewood nowhere close to their best

Josh Hazelwood (5/10): Let’s not be too harsh on the 24-year-old playing in his only second away series, the first competitive one and that too an Ashes. Hazlewood sneaked in because Harris retired right before the series, and he tasted success by ending up as the third-highest wicket-taker. But there is a long road for him to travel to transform into a bowler who actually makes a strong impact. He was inconsistent and wayward when Australia needed him the most. Not surprisingly, he remains ‘work in progress’.

Nathan Lyon (6/10): He may not have got the opportunity to sing ‘Under the Southern Cross I Stand’ this time around, but Lyon made sure he remains a crucial part in the Australian set-up. Lyon finished with 16 wickets in the series, and showed more gumption and fire than his pace bowlers put together. He remains one of those men who did not deserve to be on the losing side. ALSO READ: Nathan Lyon’s role in Australia’s bowling attack extremely critical

Peter Siddle (5/10): Many whined that Siddle should have been played earlier in series, but not many have thought about what different he could have one with Australia’s batsmen making scores like 136 and 60 all-out. He got a chance in the final Test, bowled very impressively, and proved that there is a lot of cricket left in him. ALSO READ: Peter Siddle could not have won Ashes 2015 on his own! 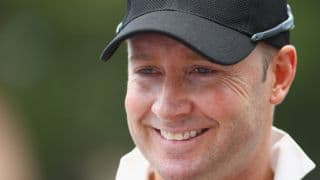