Ashok Dinda to bowl with camera on headband to give TV viewers an exciting new view!

Ashok Dinda to bowl with camera on headband to give TV viewers an exciting new view!

Ashok Dinda is already trying out the new technology during RCB's net sessions.

If you thought umpires were the only people to be pinned with the cameras, you are mistaken. In an effort to make things more interesting for viewers, Ashok Dinda is going to sport a camera fitted on his forehead headband to give cricket fans an exciting spidercam view!

“The Umpire camera was just a copy from Big Bash League. We were itching to do something special with it. So we came up with the Dinda idea. Dinda leaps so high in the air that the view from the camera at the bowling end is going to be unmatched,” said a source close to the telecasters of the Indian Premier League (IPL).

Though the viewers will watch it for the first time in the next Royal Challengers Bangalore (RCB) match, the production team — with due permission from the team management — had tested the camera in the nets. “Gayle began his warm-ups against Dinda and the huge sixes looked awesome from Dinda’s headband angle,” said the excited spokesperson.

If the new innovation clicks, cameras might be fitted at various other places as well like Faf du Plessis’s head.

Dinda, meanwhile, continuous to be a superhit on social media. One cricket fan tweeted: “Dinda is the only object with Kingfisher written on it that flies.” 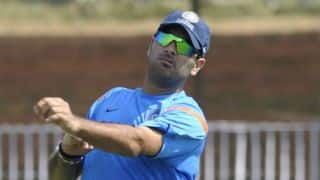