Virat Kohli has long been touted as India’s future captain. He is India’s best batsman and now with MS Dhoni injured for the Asia Cup 2014, Kohli gets another chance of leading the side. This will be a real test for him, as India look to regain the Asia Cup. Shrikant Shankar feels that Kohli will know more about his own abilities, as the tournament progresses.

It is no surprise that Virat Kohli is thought of as the future Indian captain. He led the India Under-19 side to World Cup glory in 2008. Ever since, he has progressed rapidly. He was part of the Indian team that conquered the world in the ICC World Cup 2011. After that the team went on a downward spiral. Legendary players were well past their prime and the results did not match the ambitions of any Indian cricket fan. Through all this, Kohli shone brightly.

The ability to single-handedly win matches in any game, let alone cricket, is a rare gem for any setup to possess. Kohli has that quality. He has proved to be India’s best batsman across formats in the last three years. But it is in One-Day Internationals (ODI) that he has been head and shoulders above anyone else from around the world. Statistics don’t reveal everything, but they never lie. Kohli has been supreme in all conditions and against all opponents.

But captaining the side is a different matter altogether. In fact, he has already had a taste of captaining the side in recent times. Kohli leads Indian Premier League (IPL) side, Royal Challengers Bangalore (RCB). He is also the vice-captain of the Indian team. His first brush with captaincy with the national team did not go down too well. He sent Sri Lanka into bat and they amassed 348 runs for the loss of only one wicket. India were then bowled out for 187. But things got better after that.

Kohli led India to a comfortable victory over West Indies a few days later. He then led India to another win over Sri Lanka in a low-scoring match. Dhoni came back into the fold and won India the final. Kohli’s next assignment was the five-match ODI series in Zimbabwe. India won it 5-0, but that was on expected lines. Now, arises a new challenge. Kohli will lead India in the Asia Cup 2014 as Dhoni is injured. This will be a real test for him, as he will lead the side for the whole tournament and against some quality opposition.

One cannot really read much into his captaincy, as it is still in its infancy. There are those who want him made as the captain of the side immediately and there are also his detractors. A case can be made that he is India’s default choice as captain. He is their best batsman, and he is assured of a spot in the side for the foreseeable future. Then there is his on-field behaviour and persona that some find not worthy to be made as the captain of the side.

Cricket like all sports is a result-based industry. If Kohli can help India to regain the Asia Cup, his credentials as captain will increase. The big question is that can he continue with his excellent batting form, while also leading the side? Alastair Cook has found that job difficult after a period of time. In the Asia Cup, Kohli will know more about his own abilities as a batsman, captain and  man-manager.

After all, in the last Asia Cup against arch-rivals Pakistan, he produced one of the greatest displays of batting in recent years. Who is to say that Kohli won’t find his true calling as captain in this Asia Cup! 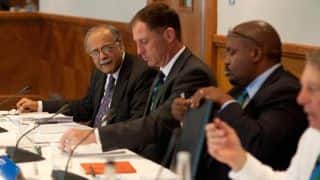