Here s how Bangladesh made it to their third Asia Cup final in four years:

Bangladesh made it to their second straight Asia Cup final after a clinical win over Pakistan, thus registering their fourth straight ODI over the 2017 ICC Champions Trophy winner. However, it has not been as easy road for Bangladesh who lost their most experienced batsman in Tamim Iqbal to injury in the first game, followed by talismanic Shakib Al Hasan s loss just ahead of the Pakistan game.

But they found heros in Mushfiqur Rahim, Mustafizur Rahman and skipper Mashrafe Mortaza and despite a depleted team, Bangladesh will believe in themselves to upset India in the final.

Here s how Bangladesh made it to their third Asia Cup final in four years:

After a returning Lasith Malinga run rampant reducing Bangladesh to 2 for 3, effectively 3 for 3 with Tamim retired hurt, Mushfiqur Rahim and Mohammad Mithun added 131 runs thus setting Bangladesh on course for a competitive total. Tamim came out to bat with a fractured arm after Bangladesh had lost nine wickets and helped Mushfiqur take 32 runs for the last wicket.

In reply, Sri Lanka were no match to the discipline of Bangladesh bowlers with Mortaza, Mustafizur, Mehidy Hasan Miraz taking two wickets each while Shakib, Rubel Hossain and Mosaddek Hossain added one each. Sri Lanka were bundled out for 124.

Lost to Afghanistan by 136 runs

It was rude shock for Bangladesh as Afghanistan walloped them in the second group game. After letting Afghanistan go from 160 for 7 to 255 for 7, the batsmen lost the plot against Afghanistan bowlers. Gulbadin Naib, Mujeeb ur Rahman and Rashid Khan picked two while Aftab Alam, Mohammad Nabi and Rahmat Shah added one each. Bangladesh were shot down for 119 with Shakib Al Hasan top-scoring with 32.

Lost to India by 7 wickets

On to the Super Fours were bundled out Bangladesh for 173. Ravindra Jadeja wreaked havoc with 4 for 29 while Jasprit Bumrah and Bhuvneshwar Kumar added three each. Mehidy Hasan s 42 at No.9 was the only notable contribution for Bangladesh. In reply, Rohit Sharma steered the chase with an unbeaten 83 while Dhawan added 40. Dhoni finally got some time in the middle making 33.

Bangladesh got back on the saddle with a tense win over Afghanistan and they got the big W when it mattered the most. After Liton Das 41, Bangladesh slumped to 87 for five, before recalled Imrul Kayes (72*) and Mahmudullah (74) put their hands up to rescue their team as Bangladesh posted 249 for 7.

In their defence, Bangladesh had a tight leash on the proceedings but Mohammad Shahzad (53) and Hashmatullah Shahidi (71) ensured Afghanistan preserved wickets for the final flourish and the final flourish did come almost with Asghar Afghan adding 39 and Mohammad Nabi scoring 38. However, Mustafizur defended eight runs, giving away just four in the final over to keep his team alive.

In the do or die encounter, Bangladesh found themselves in trouble at 12 for 3, but Mushfiqur (99) and Mithun (60), once again, put on the rescue act with a big 144-run stand, taking Bangladesh to 239.

It sure was 20-30 run less, but Bangladesh made up for the shortage of runs with the bat with a stellar feilding performance, that was topped by Mashrafe Mortaza s flying catch to remove the dangerous Shoaib Malik. Rubel Hossain (8-0-38-1) and Mehidy Hasan (10-1-28-2) then soaked in the pressure to sent down few tight overs to compliment Mustafizur Rahman s 4 for 43. 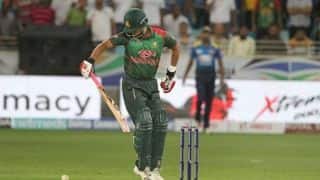