Since the inception of the Asia Cup in 1984, India have won the title on six occasions with an overall record of 32-16-1.

The Indian cricket team, led by Rohit Sharma, will contest the 2018 Asia Cup, to be held in the UAE from September 15-28. Since the inception of the Asia Cup in 1984, India have won the title on six occasions (including in 2016 when it was played as a Twenty20 format edition), with an overall record of 32 wins, 16 losses and one no-result.

Ahead of India s first game of the 2018 Asia Cup versus Pakistan on September 18, we take a look at how past Indian teams have fared at the tournament since 1984.

India, led by Sunil Gavaskar, won the inaugural tournament after beating Sri Lanka by 10 wickets and then Pakistan by 54 runs in the final at Sharjah. In the summit clash, Surinder Khanna s 56 and a 50-ball 43 to Sandeep Patil pushed India to 188/4 in 46 overs, after which Pakistan were bowled out for 134 in 39.4 overs with Roger Binny and Ravi Shastri taking three wickets apiece.

India were victors four years later, beating Sri Lanka in the final in Dhaka. They began by beating Bangladesh by nine wickets, lost to Sri Lanka by 17 runs and then beat Pakistan by four wickets to reach the final. On the big day, Sri Lanka were kept to 176 in 43.2 overs with Kris Srikkanth the surprise package with 3/12 in 3.2 overs. Navjot Singh Sidhu cracked four fours and three sixes in a devastating 76 off 87 balls, while skipper Dilip Vengsarkar sensibly finished the chase in 37.1 overs with 50 not out off 81 balls. Sidhu was named Player of the Series for his 179 runs at 59.66, with three fifties in four innings.

A hat-trick of titles for India, this time under Mohammad Azharuddin who hit 54 not out in the final as Sri Lanka were defeated by seven wickets at Eden Gardens. India began the tournament by chasing Bangladesh s 170 with Sidhu scoring an unbeaten 104 off 109 balls. A 36-run loss to Sri Lanka followed, but in the repeat clash in the final it was Azharuddin s side that triumphed. Four wickets to Kapil Dev led the way as Sri Lanka were kept to 204/9 after which Sanjay Manjrekar (75*), Sachin Tendulkar (53) and Azhar finished the chase.

India beat Bangladesh by nine wickets, lost to Pakistan by 97 runs and then bounced back to beat Sri Lanka by eight wickets. In the final, history repeated itself. Chasing 231, India romped home with eight wickets to spare in the 42nd over thanks to Sidhu (84*) and skipper Azharuddin (90*).

Two seasons on, India stumbled through the fifth edition in Sri Lanka. A six-wicket loss to World Cup winners Sri Lanka was followed by a no-result and a wash-out that left Tendulkar s team needing to win their last game to qualify for the final. They beat Bangladesh by nine wickets in a rain-reduced match but then lost to Sri Lanka in the final, where Sanath Jayasuriya, Marvan Atapattu and Arjuna Ranatunga hit fifties in a seven-wicket win for the hosts.

A poor tournament in Dhaka, with defeats by 71 runs to Sri Lanka and 44 runs to Pakistan ending India s campaign before the final. An eight-wicket win over hosts Bangladesh, highlighted by an unbeaten 136 from skipper Sourav Ganguly, promised more but the batting came undone thereafter, with totals of 205 and 251 not good enough.

India, under Ganguly, beat UAE, Bangladesh and Sri Lanka to enter the final at the Premadasa, where the bowlers did very well to keep the hosts to 228/9 only for the batting to come a cropper. Chasing 229 for the title, India slumped to 26/2 and then lost Tendulkar for 74 in the 40th over at 140/7. Harbhajan Singh (16) and Zaheer Khan (28*) offered some fight but India fell 25 runs short.

Four years later, India again reached the final, this time in Karachi, and were undone by Sri Lanka. A hat-trick of wins over Hong Kong (by 256 runs), Pakistan (six wickets) and Bangladesh (seven wickets) were followed by a blip against the hosts (by eight wickets), but a six-wicket victory over Sir Lanka in a dress rehearsal for the final put MS Dhoni s in-form team in the summit. Come the big day, however, and they were smashed by Sri Lanka. Sanath Jayasuriya rolled back the years with 125 from 114 balls and then it was the turn of young spin sensation Ajantha Mendis to bamboozle India with 6/13 as they lost by 100 runs.

Dhoni s team emerged triumphant in the 2010 edition in Sri Lanka. Bangladesh and Pakistan were beaten in chases, then Sri Lanka got the better of them. In the final at Dambulla, India made 268/6 with Dinesh Karthik, a late call-up to the squad, scoring 66 soon after arriving in Sri Lanka. Ashish Nehra claimed 4/40 to bowl India to an 81-run win.

India won two of three matches but could not qualify for the final in Dhaka. Centuries to Gautam Gambhir (100) and Virat Kohli (108) downed Sri Lanka in India s first game, but then came a narrow loss to Bangladesh in the game in which Tendulkar scored his 100th International hundred. Against Pakistan, India conceded 329 but won with six wickets and 13 balls remaining as Kohli scored a superb 183. India needed Sri Lanka to beat Bangladesh in their final league game, but the hosts scripted a memorable win to oust Dhoni s team.

Another muddled campaign from Dhoni s India. They won their opening game in Fatullah but defeating Bangladesh, but lost to Sri Lanka by two wickets and to Pakistan by one wicket, with old nemesis Shahid Afridi hitting a last-ball six, to dash their hopes of making the final. Afghanistan were beaten by eight wickets, but Sri Lanka s win over the same team in the last league game took them into the final.

India, under Dhoni, stormed to the title in 2016 in what was a T20 format Asia Cup. Continuing a strong run of form in the format which came after a landmark 3-0 win in Australia, and acted as a precursor to their march to the semi-finals of the ICC World T20 at home, India beaten Bangladesh (by 45 runs), Pakistan (by five wickets), Sri Lanka (by five wickets) and UAE (by nine wickets) to storm into the final. Hosts Bangladesh were no match, beaten by eight wickets. 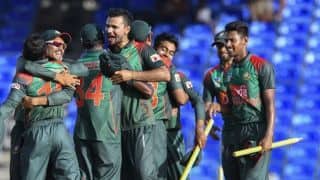