India remained unbeaten throughout the Asia Cup T20 2016, which included a 8-wicket win in the final against Bangladesh.

Though it seemed Bangladesh might pose a threat in the all-important final of Asia Cup T20 2016, India turned it into a no-contest, winning all five matches in a breeze. Bangladesh, to their credit, did inflict emphatic defeats on Pakistan and Sri Lanka, despite being less strong on paper. Pakistan and Sri Lanka put up the occasional spark of brilliance, but both teams looked generally listless throughout the tournament. A bright spark amidst all this was the rise of UAE, who went past Afghanistan, Oman, and Hong Kong to make it to the top five.

The tournament has witnessed several star performers, and CricketCountry lists 11 of the best. Unfortunately, since the list is limited to 11 men, the list does not consist of several others despite their excellent performances.

Babar is the first surprise selection among several in the XI. One must remember here that Hong Kong lost all three matches of the qualifiers. It did not matter to Babar. They were set 181 against Oman and were restricted to 175 for 7. This included a 60-ball 122 from Babar. It remains the fourth-highest score in T20I history. It was also the only hundred of Asia Cup T20 2016.

Babar followed this by top-scoring with 54 in the next match, against UAE. He failed in the third, scoring 18, but with 194 runs from 3 matches at 64.67 at a strike rate of 160.3, he was easily the batsman of the tournament. Only three others went past 150 in the tournament, and all of them played at least 5 matches.

Since the retirement of the big guns, Chandimal has been one of Sri Lanka s prime batsmen. Had he not scored that fifty, Sri Lanka might have succumbed to UAE; he was the only one to give them hope against Bangladesh; and despite his failure against India, Chandimal (and Tillakaratne Dilshan) laid the foundation in the game against Pakistan. They put up 110 for the first wicket but Sri Lanka lost again.

A tally of 149 runs at 37.25 and a strike rate of 110 sounds impressive for a team that lost two matches out of four, more so since he can double up as wicketkeeper.

India chased down targets four times in the tournament. Kohli batted thrice in these, scoring 49, 56*, and 41*. While his contest with Mohammad Aamer will be talked about in years to come, the ones against Sri Lanka and Bangladesh were planned, brilliantly paced chases. Most importantly, he seldom looked in trouble throughout the series, and was certainly the most crucial cog of India s unstoppable machinery. READ: MS Dhoni, Yuvraj Singh, Ashish Nehra prove that age is just a number in Asia Cup T20 2016

Sabbir batted at No. 3 throughout the tournament, but he will have to relinquish the spot to Virat Kohli. Named Man of the Series, Sabbir smashed 176 from at 44.00 and a strike rate of 124, but it was his 80 against Sri Lanka that set the tone for Bangladesh in the series. They never looked back from there till the final.

In the final, too, he was abandoned by his partners. Had Mahmudullah been promoted up the order, he might have got going. READ: An open letter to Bangladesh cricket fans

Nobody knows why Mahmudullah, despite showing form, never got enough overs to prove his worth. He got out only once in the series, scoring 121 at a whopping strike rate of 166. A promotion up the order, especially in the final, might have changed Bangladesh s fortune, but that did not happened.

By the time Pakistan had sorted things out with Sarfraz, it was too late. He was the only one to show some sanity with bat against India (scoring 25 out of 68 that came off the bat); and pushed up the order, he played two beautifully paced innings against Bangladesh and Sri Lanka, albeit in valiant causes.

He was neat with gloves as well, just about edging out Chandimal. With five quality men at the top, he will be expected to what he does best have a blast at the opposition.

An outstanding fielder, an extremely hard hitter with an incredible bat speed, quick enough to hit the 140-mark, and gifted with that ability to strike at regular intervals, Pandya was one of the finds of the tournament.

He did not have that one defining performance, but an unnerving blitz against Bangladesh, 3 for 8 against Pakistan, 2 for 26 against Sri Lanka, and 1 for 11 against UAE summed up his tournament perfectly. He could become one of those men who may help shape the future of the Indian limited-overs side.

Amjad went wicketless in the last match against India, but he got a wicket every time he bowled till then, and finished as the leading wicket-taker in the tournament with 12 wickets at 14.08, and more importantly, a strike rate of 11.5.

Three tremendous spells (which combined to 12-0-95-8), against Sri Lanka, Bangladesh, and Pakistan, gave UAE hopes of a victory. Unfortunately, his teammates let him down. The fact that he is a hard hitter cannot be neglected, either. READ: Asia Cup 2016: Rise of Amjad Javed and UAE cricket

Aamer had made his comeback earlier this year, but it was during the tournament that he took cricket fraternity by storm, breathing fire on Rohit Sharma, Ajinkya Rahane, and Suresh Raina and rattling Yuvraj Singh with pace, accuracy, and movement. It took a masterful innings from Kohli to push India through.

His rise continued through the tournament. UAE never had a clue, and though Bangladesh triumphed against him, it was not before he bowled a yorker and a peach of an incoming delivery to take two wickets.

If anything, Aamer has come back better than before, and that is bad news for batsmen across the globe.

Back with a remodelled action, Al-Amin was more accurate than before. While not as quick as Taskin Ahmed, Al-Amin more than made up for it with canny variations in line, length, and movement. His 5 matches gave him 11 wickets, and his average of 12.18 and strike rate of 9.1 bordered on the line of ridiculous.

Had there been no Aamer, there would have been no doubt over the best bowler in the tournament.

The 11th spot was a toss-up between three Indians, all of whom had done brilliantly throughout the tournament. In the end, Bumrah, with 6 wickets at 15.67 and 5.22 runs an over, easily edges out Ravichandran Ashwin and Ashish Nehra. With his ability to bowl yorkers on demand, vary his pace with remarkable ease, and crafty variations that make him almost impossible to score off in the death overs, Bumrah makes it ahead of the other two.

The team probably lacks a world-class spinner, but a chunk the tournament was played on seam-friendly tracks, which leads to the seam-heavy nature of the attack. 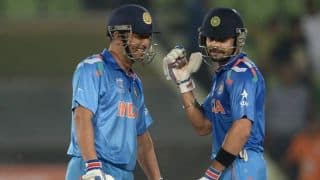