Asif Iqbal Razvi, born June 6, 1943, was a Pakistani cricketer who went on to captain the side.

Asif Iqbal Razvi, born June 6, 1943, was a Pakistani cricketer who went on to captain the side. Starting a seam bowler, he went on to be an established batsman. Admired for his style and fearless approach to the game, Asif has his detractors too, after his name cropped up in the match-fixing controversy. Suvajit Mustafi lists out 15 facts about the Pakistan cricketer, who was born in India.

1. Indian cricketing connection: Asif was born in Hyderabad, India and hailed from a cricketing family where few of his uncles played the game at a higher level. He is the nephew of Ghulam Ahmed, the former India captain and off-spinner. Living in a joint-family, cricket was everywhere in the house and young Asif got encouraged by his uncles to take up the game.

2. Childhood dream: Like many a child in India, Asif too dreamt of making a living by playing cricket. As cricket crazy child, he would say his mother that he would make his living from game. Asif went on to live the dream.

3. Represented South Zone against Pakistan: When Pakistan toured Indian in 1960-61, Asif was already playing Ranji Trophy as a medium-pacer. In fact, the future Pakistani skipper played against the side while representing South Zone in a tour match.

4. The Eden Gardens dream: As a child, while playing in Calcutta, Asif visited the iconic Eden Gardens. He dreamt playing for India at this ground. Several years later, in 1980, he played his last international match at the very venue, but as the captain of the Pakistan side. He received a standing ovation while leaving the field for the last time. Even after three and half decades, it s a memory that Asif still cherishes those moments.

5. Graduate in history and economics: Cricketers who turned up for Pakistan in the past years were a breed of extremes. While few didn t manage to get the basic education, few had a cabinet full of medals and degrees. Asif belonged to the latter category. He is an alumnus of Hyderabad s Osmania University and Karachi s SM College and is a graduate in history and economics.

6. Started as a swing bowler: From Hyderabad in India, his family migrated to Karachi, Pakistan. Asif continued his cricket and was a swing bowler, who could bat a bit. In 1964-65, he made his Test debut against Australia at Karachi. He opened bowling for Pakistan and batted at No 10.

7. Transition to a batsman: Before the 1967 England tour, Asif developed back problems and he knew bowling would be difficult. He decided to concentrate more on batting. At Lord s, Pakistan were staring a follow-on when he struck a timely 76, adding 130 with Hanif Mohammad. In the third Test at The Oval, Pakistan were staring an innings defeat at 65 for eight. Batting at No 9, Asif struck an inspiring 146. His maiden hundred was also the highest score by a No 9 in Test cricket for a long time. There was no looking back since then.

9. Playing for Kent: Asif was selected to play for English county team Kent. In an opportunity of a lifetime, he got to play alongside the likes of Colin Cowdrey, Allan Knott and Derek Underwood. He played for them till 1982 and later even captained them.

10. Captaining Pakistan: Asif hadn t just made a name for his footwork and brilliant cover-driving. He was also regarded as a fine cricketing brain and led Pakistan in the inaugural World Cup in 1975 and later in World Cup 1979. In the second World Cup, he led the side to the semi-final where they lost to defending champions West Indies, who once again went on to win the tournament.

12. Match-fixing cloud: When the match-fixing scandal broke out in 2000, Asif s name got dragged in it. He was said to be one of the first cricketers to be involved in fixing and his last Test, back in 1980 came under scanner. Another report linked him to betting in Sharjah games. In 2001, he disassociated himself with CBFS. He reported as saying, Heavy infiltration of politics in the sport has created an atmosphere about which I feel deeply uncomfortable . He also denied the allegations.

13. Related to Sania Mirza: Asif is a related to Indian tennis star Sania Mirza, who too hails from Hyderabad and is married to Pakistani cricketer Shoaib Malik.

15. Settled in London: Asif has played many years for Kent and is now settled in London. He now calls himself a retired grandfather . In a report from Wisden, Asif was quoted as saying, I ve lived a great life as a cricketer and I m really grateful to God for that. I never wanted to [settle down in England], but when you have children, grandchildren and they grow up and you never want to leave them. So they are the reason why we [his wife and himself] decided to settle down in England. 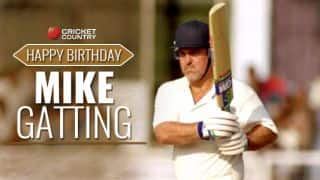