George Bailey has his critics, but on Monday he achieved the impossible by making poor Michael Clarke grimace at something other than his cursed vertebrae. It was a slovenly piece of running from the affable Australian stand-in captain ambling towards what he thought was the non-danger end —he clearly hadn't studied Sri Lanka's previous in this tournament — and up on the balcony the official skipper covered his face in his palm as his replacement was caught a long way short of his ground. 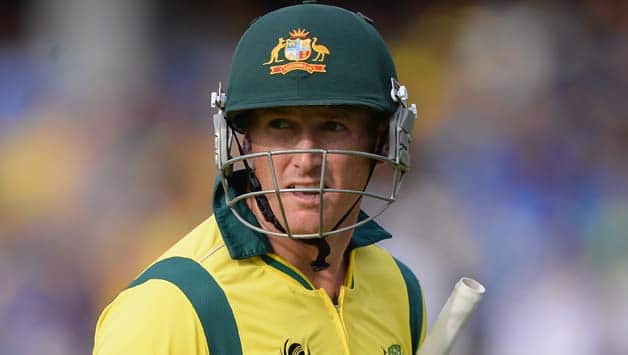 George Bailey has his critics, but on Monday he achieved the impossible by making poor Michael Clarke grimace at something other than his cursed vertebrae. It was a slovenly piece of running from the affable Australian stand-in captain ambling towards what he thought was the non-danger end — he clearly hadn’t studied Sri Lanka‘s previous exploits in this tournament — and up on the balcony the official skipper covered his face in his palm as his replacement was caught a long way short of his ground.

Bailey, as is often stated, is easy to warm to. With his midwest American farm boy smile ever present despite constantly being caught in the eye of whatever cyclone Australian cricket is most recently swept up in, he resembles a poor man’s Kim Hughes on Valium — a decent, twinkle-eyed chap under immense pressure in the midst of a failing national side but who, rather than exiting in an explicable flood of tears, remains charmingly oblivious to it all and is happy to take the positives, moving forwards and so on. The only time there has been any genuine ill-feeling on record towards the Tasmanian was when an executive of Channel Nine claimed Bailey would be “flipping burgers” if it wasn’t for the money the station invested into cricket, which, given the paucity of that network’s coverage is rather like President Assad claiming Syrian rebels would be fecklessly unemployed if it wasn’t for him.

Clarke, though, was justified in his frustration towards the dozing Bailey on this occasion, but the stand-in captain’s lot is not an easy one. In 2010 he himself replaced Ricky Ponting — absent due to the death of his grandmother — as Australia took on Sri Lanka at the Melbourne Cricket Ground (MCG) in 2010.

Despite having the visitors staring into the barrel at 107 for eight chasing 240, somehow, Clarke allowed the match to fatally drift as Angelo Mathews (with the sort of swashbuckling knock he used to play), Lasith Malinga and Muttiah Muralitharan stole one of the most unlikely One-Day International (ODI) victories in history. On Monday, it seemed as if Australia’s last-wicket pair might do something similar to Mathews’s side, and thus allow New Zealand to proceed instead, which would have been an ironic, arsenic-laden cherry on top of the rotten form the Sri Lanka skipper has taken to and maintained throughout his time at the helm. It didn’t happen, however, and Bailey was again left to front up to the cameras with not even a consolation win to lend authenticity to his impervious grin.

James Sutherland, Cricket Australia’s Chief Executive Officer, labelled David Warner’s punchy exploits in a Birmingham Walkabout “despicable”, and he’s entitled to lay it on thick when a member of his staff transgresses to the embarrassment of the firm.

CA’s culture of high morality and homework clearly isn’t working, however, and the national side is now left with a state of affairs where David Gower‘s recent claim that Australian cricketers can turn “feral” now looks ludicrous as well as slightly nationalistic.

Sutherland and Arthur, with their self-assessment forms and condemnation, are turning Australia into the anti-feral — a toothless beast, albeit with nice cheekbones and good manners — which comes across well in defeat, a scenario happening increasingly often. This isn’t about meterosexuality, peroxide or underwear shoots — the easy targets often used as an generational excuse for the side’s failings — but more an attitudinal shift to a scenario where maintaining outward decency seems of greater importance than the side’s recent indecent results.

Ironically, it was actually Bailey who broke with establishment protocol when he labelled Warner’s behaviour a “minor incident“, an admission which brought him admonishment from those who’ve bought into the new Australian cricketing culture of sweetness and apple pie. Perhaps they are correct, and Bailey was wrong to term an apparent physical assault as such, but as his nation lurches onward directionless, Warner’s fist and even Clarke’s spine seem ever more irrelevant compared to the more general weaknesses afflicting the body cricket in Australia. Are batsmen aged 28 to 32 better than other age-groups?