The Aussies fought back to stun the tourists and steal victory by a mere 36 runs.

On January 6, 2010, Australia registered an unlikely victory against Pakistan at the Sydney Cricket Ground (SCG). Having conceded a lead of over 200 in the first innings, the Aussies fought back to stun the tourists and steal victory by a mere 36 runs. Nishad Pai Vaidya looks back at the game.

You can never write the Australians off, even if you are in total control of the game. There is that never say die spirit which is typical to their breed; they stay positive despite the odds stacked against them. Thus, even when Ricky Ponting was leading a side in transition in the late 2000s, he backed his young bunch to win just like his world-beating unit had ruled the globe. So, when Pakistan had taken a 200 plus run lead during the New Year’s Test in 2010, this leader backed himself to do the job.

The second Test between Australia and Pakistan began on January 3 at Sydney. Australia were coming into this game after winning the Boxing Day Test by 170 runs. On Day One, Ponting surprised everyone by opting to bat first. In his book At the Close of Play, Ponting wrote, “The pitch was damp and the sky grey when I won the toss, but still opted to bat on the basis that if we could get through the first 25 overs, we’d be in the box seat.” However, that did not happen as Mohammad Asif ripped through the Australian top-order.

There was a bit of rain on Day One, but Asif’s six for 41 bundled the Aussies out for only 125. So much for Ponting’s confidence some may have said! You may have had a champion team, but you cannot beat the conditions every time. Pakistan ended Day One on 14 for no loss.

On Day Two, Pakistan took further control of the game with the openers setting up a good base. While all their batsmen got starts, only Salman Butt and Imran Farhat continued to make half-centuries and they finished the day on 331 for nine. Early next morning, Kaneria was dismissed as Australia wrapped things up for 333. Yet, Pakistan were miles ahead as they had a 206-run lead.

Facing the huge deficit, Australia were led by Shane Watson and Phil Hughes as they put up 105 for the opening wicket. They lost a few wickets, including that of Watson for 97, but they went past Pakistan’s lead. However, when Clarke (fourth wicket) was dismissed with the score on 217, the Australian slide commenced. From 217 for four, they slipped to 257 for eight. Thus, they were only 51 runs ahead and eight wickets down.

Now, the likeliest warhorse, Michael Hussey soldiered on — with a little help from Kamran Akmal of course. It looked as if the keeper had grazed a bit of butter on his gloves as he dropped Hussey three times off Danish Kaneria. Hussey stood firm and finished the day on 73 not out as Peter Siddle held one end as Australia ended on 286 for eight. Pakistan rued their luck as Kamran had perhaps cost them the match. Hussey was dropped on 27, 45 and 52. That wasn’t his only mistake. When Watson and Hughes were going strong, they took a risky single. Watson dived as it came towards the striker’s end and was miles short when the ball was collected by Kamran. Instead of taking the bails off, Kamran merely sighed leaving Watson in a state of bewilderment.

Even then, Australia were only 80 runs ahead and a victory on Day Four (January 6) seemed too far-fetched. Yet, Ponting writes in his book, “Before they (Hussey and Siddle) went out I made a point that while few people outside our dressing room thought we couldn’t win, I hadn’t given up.” True to their captain’s spirit, Hussey and Siddle continued to fight and extend the challenge for the Pakistanis. Were cracks beginning to show after the Kamran-drops? They could well have had Hussey back in the hut the previous day.

While Siddle stayed at the wicket, Hussey moved from strength to strength, going past his 100. He took Australia past 300 and then the lead past 100. They were gathering momentum as Pakistan seemed flustered with each passing minute. The 100-run partnership also came up as they went into lunch at 373 for eight, a good 166 runs ahead. But, after lunch, Siddle was dismissed by Asif and a run later, Doug Bollinger fell too. Australia were bundled out for 381, 175 runs ahead. A target of 176 didn’t seem daunting and Australia had to pull a rabbit out of their hats.

Things moved along smoothly for Pakistan after the start of their chase. Farhat and Butt got them to 34 and things were beginning to look good. There may have been a thought that they could move past the Kamran debacle and register a memorable victory. However, Farhat then spooned a straightforward chance off Bollinger to Mitchell Johnson at mid-off.

As Pakistan reached their 50, Johnson had Faisal Iqbal as a ball held its line around off-stump and it took the edge as it flew towards the wicket-keeper Brad Haddin. A run later, Butt fell in an unfortunate manner. Johnson strayed down the leg-side and Butt tried to glide it round the corner. Instead, the ball took a thin edge and Haddin dived across to his right to take a magnificent catch. Skipper Mohammad Yousuf and Umar Akmal steered the ship to 77 for three at tea.

Before they (Hussey and Siddle) went out I made a point that while few people outside our dressing room thought we couldn’t win, I hadn’t given up — Ricky Ponting

Australia were using Nathan Hauritz as the attacking option. The Pakistani batsmen were trying to get the better of him and score runs, but Ponting had a few tricks up his sleeve that day after tea. “The Pakistan captain was clearly seeking to smash out frontline spinner out of the attack and had hit him for three fours in one over, but I kept the field up and when he went for the big shot he hit it clean but straight back to the bowler,” Ponting writes.

Yousuf danced down the track and smashed one back at Hauritz. The bowler was onto it before he knew it as it sped into his cupped hands. Hauritz turned across and fell to the ground as Australia celebrated. However, he was grimacing in pain as he started bleeding due to the impact. Ponting recalls Hauritz saying that he may have to go off the field. But skipper Ponting urged him to continue by taping it. And, what an inspired move it turned out to be. Pakistan were now 77 for four.

Two balls later, Misbah-ul-Haq cut a widish delivery from Hauritz straight into the hands of point. Pakistan now had half their side back in the hut. Now, the Akmal brothers were in the centre. This was Kamran’s opportunity to redeem himself.  They took Pakistan past 100, before Johnson had Kamran fending at one outside the off-stump and Haddin completed an easy catch. Mohammed Sami put up 30 runs with Umar as Pakistan were 133 for six. There was still hope. Sami had motored along to two, with Umar doing most of the scoring.

Just then, Hauritz slipped one past Sami’s bat and there was a noise. Haddin collected it and appealed. The umpires were unmoved, so Ponting asked for a referral. Hot Spot showed a small edge and Sami had to walk back. With no option but to attack, Umar skied one off Bollinger through the off-side. Johnson came across from mid-off to set himself underneath a tough take. With 49 to his name, Akmal was by far their best batsman of the innings.

Throughout the game, Ponting tested the Pakistanis by keeping close fielders. They were essentially tempted to go in the air, but by now, it was an easy win. Danish Kaneria then smashed one down Shane Watson’s throat at deep mid-wicket as Pakistan were now nine down for 135. The win was achieved two balls later when Umar Gul chased a wide one from Hauritz and slapped it to mid-off. Australia celebrated like there is no tomorrow. A captain’s confidence in the team had been vindicated. Ponting writes, “When we fought back to claim victory that everyone outside our group thought was lost. I was suddenly vindicated, though of course it’s never as cut and dried as that.”

Man of the Match: Michael Hussey. 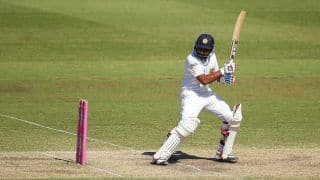