Steven Smith s team managed to build on the winning momentum that began at the Adelaide Oval against South Africa, and went on to demolish Pakistan 3-0 in one of the most comprehensive ways.

In their previous series, Australia had used as many as 19 cricketers against South Africa in a losing cause. But against Pakistan, the hosts required only 13 players, in three Tests, to demolish a team which was ranked world No. 1 not long ago. Steven Smith s team managed to build on the winning momentum that began at the Adelaide Oval against South Africa, and went on to demolish Pakistan 3-0 in one of the most comprehensive ways. At Brisbane, Australia survived a real scare to register a narrow victory by 39 runs. But they recovered enough to thwart every challenge that Pakistan threw at them to register big wins at Melbourne (by an innings and 18 runs) and Sydney (220 runs).

How critically do conditions matter in Test cricket was proven once again over the last three contests. If this Australian side is pitted against Pakistan in their adopted home in UAE, a victory will be termed unthinkable . But at home, Australia showed no qualms in annihilating Pakistan. Smith averaged 110.25, while David Warner reset batting records. Josh Hazlewood remained relentless with an economy of just 1.99. His new-ball partner Mitchell Starc claimed 14 wickets. However, these were not the only heroes in Australia s series win. Let us take a look:

David Warner (9/10): With 356 runs in 3 Tests at 71.20, Warner ended as the second highest run-scorer for Australia, obviously behind Smith. He had a quiet game at Brisbane, but Warner s 144 at Melbourne took the advantage away from Pakistan after they made 443 for 9 declared. Warner turned up at Sydney in beast mode, hammering a century in the first session on Day One to become only the fifth player to do so. A rapid century did not quench his thirst. In the second innings, he registered the second-fastest fifty in Tests and fastest for Australia.

Matt Renshaw (8/10): Warner s newest opening partner rose to the challenge after an impressive start at Adelaide against South Africa. Renshaw showed all qualities that Smith sought in him as the partner to an explosive Warner. With 271 runs at 67.75, Renshaw enjoyed his first full series. Most of the marks he has got are due to the splendid 184 at Sydney, an innings where he fell short of becoming the youngest Australian to a Test double-century.

Usman Khawaja (8/10): He made 4 runs less than Renshaw, but without any century. Khawaja has himself to blame, as he fell for 97 chasing one outside off at Melbourne in the second Test the closest he came to a century. Khawaja scored three fifties at an averaged 66.75, numbers that should set him up well for the India tour.

Steven Smith (9.5/10): By winning the Man-of-the-Series award against Pakistan, Smith ended the home season on a high. He scored 130 and 63 at Brisbane. At Melbourne, he remained unbeaten on 165 in Australia s only innings, and Smith signed off at Sydney with 24 and 59. Smith was spot on with his team selections, field placement as well as in using the pacers. But, at times especially at Brisbane and Melbourne he looked perplexed over using Nathan Lyon. It could be a concern for Australia going into the India tour.

Peter Handscomb (9/10): Finishing only behind his leaders in Smith and Warner in terms of making runs, Handscomb would not have wished for any better start to his Test career. He had scored a fifty against South Africa on debut, and Handscomb showed lot of quality as well as promise at No. 5. His form took a lot of pressure off Smith s shoulders, who was the only experienced batsman in the Australian line-up. Handscomb scored 344 runs with 2 centuries and a half-century, averaging 114.66.

Nic Maddinson (2/10): Unfortunately for Maddinson, he was axed from the side three Tests into his career. Maddinson s form remained a concern till he was dropped for the final Test. The left-handed batsman managed only 27 runs in 2 Tests.

Hilton Cartwright (5/10): The Western Australia all-rounder had an ordinary debut. Selected for the final Test in place of Maddinson, the right-handed Cartwright scored 37 runs in his only innings and remained wicketless in the four overs he was asked to bowl. Cartwright added 91 runs along with Handscomb in Australia s total of 538 for 8 declared at Sydney.

Matthew Wade (5/10): The wicketkeeper-batsman managed 46 runs in 4 innings of the 3 Tests. Wade has lacked runs ever since he has returned to the national side, which is the same reason why Peter Nevill was axed. Wade is in desperate need of runs, and his current form does not bode well for Australia ahead of the tour to India.

Mitchell Starc (8.5/10): The leader of the Australian bowling attack, Starc finished with 14 wickets at 34. He bowled his heart out in Brisbane, and bounced back in the second innings at Melbourne to claim a match-winning 4 for 36 after a poor outing in the first. Starc showed tremendous control over the ball, and produced enough swing to trouble the Pakistani batsmen.

Nathan Lyon (8/10): His numbers are irrelevant since the impact that Lyon created was something that cannot be denied. Criticised throughout the series for his lack of wickets, Lyon still finished with 11 wickets. However, it was the impactful spells that he bowled will stand out. At Melbourne, he claimed the priced wickets of Misbah-ul-Haq, Younis Khan and Asad Shafiq to set up Australia s win. At Sydney, he claimed 5 wickets in the Test but was expensive as well.

Jackson Bird (9/10): Earlier this year, Bird had claimed 14 wickets in 2 Tests in New Zealand. In this series, he returned to the playing XI once again and claimed 10 in 2 Tests. Bird, with such impressive performances, has all but confirmed his position as the third seamer in the Australian side.

Josh Hazlewood (9.5/10): He ended the series as the best bowler from both the sides. Hazlewood bowled a total of 40 maidens; the second-best bowler had 31 to his name. Hazlewood claimed 15 wickets, which is the most from either side. His economy remained 1.99 in a series where batsmen made merry. Pakistan had no answer to Hazlewood, who showed their bowling arsenal the importance of being disciplined and persistent on batting friendly pitches.

Steve O Keefe (5/10): The left-arm spinner played only in the final Test when Australia selected him as the second spinner. He did not make any particular impact in the game despite averaging 19 in the two First-Class matches at the Sydney Cricket Ground (SCG) this year. O Keefe claimed 4 wickets at the SCG. 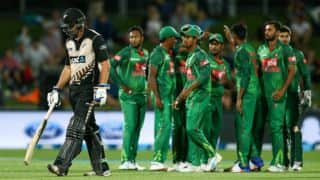