Since mid July this year, Australia have lost a mindboggling 11 out of 19 international matches across formats.

Since their tour of Sri Lanka earlier this year, Australia have lost a mindboggling 11 out of 19 international matches across formats. T20 cricket is the only format wherein Australia have never shown any serious intent to meliorate, and they will be glad having won a T20 series in Sri Lanka.. Out of these 11 defeats, 6 have been in One-Day Internationals (ODIs), a format wherein they should be claiming authority over every other side. Australia are coming off a mortifying 0-5 defeat in their last ODI assignment in South Africa, and it is a no-brainer that pressure will entirely be on them when the first ODI of the New Zealand takes place. FULL CRICKET SCORECARD: Australia vs New Zealand 1st ODI at Sydney

The year 2016 has not been particularly kind on Australia, since it turns out that they are still languishing in their rebuilding phase. Australia s win in the final Test against South Africa might have provided some consolation, but the fact is that their backs remain firmly fixated on the walls. There have been sparks of individual brilliance Usman Khawaja scoring more than 340 runs in Tests versus South Africa and Josh Hazlewood claiming 17 wickets in just 3 Tests but Australia are not playing as a unit and that remains the biggest concern.

However, that win in the day-night Test at Adelaide would have given them a glimmer of hope for the future. Australia know they have floundered and misfired, but all does not seem to be lost when there are new and promising cricketers on the stage and seniors vowing to keep up the fight. Well, Australia will hope that it is all now water under the bridge.

Australia s harrowing performances in Sri Lanka and against South Africa have impelled the selectors to put an end to the rotational policy, which had started appearing daft. First up, Australia have made the right move by retaining all their major cricketers irrespective of the work load for this three-match ODI series wherein New Zealand are heavily depleted. Mitchell Starc and Hazlewood will continue to help Australia get back on their feet and provide some teeth to their bowling attack that looked hapless in South Africa.

The series against New Zealand carries great significance for Australia. For a team that has players performing well on the individual basis, it is not transliterating into victories for teams. David Warner made runs in South Africa, but the other struggled. The pattern of Australia s defeats in past few series across formats has remained the same and achieving consistency as a group should be Steven Smith and co s only aim.

The batting department will have Aaron Finch returning to the side, but there is no Khawaja. The left-handed batsman has been a heavy run-scorer in Australia as well as New Zealand, but after 15 ODIs, he is yet to score a hundred. So far, Khawaja has managed only four fifties, but maybe his individual records is not that Australia have in mind. The upcoming Test series against Pakistan will be intense and Australia have probably rested Khawaja keeping that in mind.

James Faulkner has made a comeback to the ODI side after missing the South Africa tour, and Mitchell Marsh has retained his place despite being finally dropped from the Test side. However, there are three exciting prospects that Australia will be keenly observing, in form of Glenn Maxwell, Pat Cummins and Hilton Cartwright.

Maxwell s return to the national side is clubbed with some controversy of sorts. The all-rounder, who has been in and out of the Australian team due his inconsistency, criticised his Victoria captain and national teammate Matthew Wade. Maxwell claims he deserves a spot in the Test side and wants to bat up, but Australia coach Darren Lehmann has retorted that he would not give a chance to a batsman who has not scored a century in two years. However, Lehmann s comments are not exactly true as Maxwell scored an ODI century against Sri Lanka in March 2015.

Cummins, on his part claims that he has not lost any pace. The 23-year-old right arm pacer played his last ODI in September 2015, and is likely to serve as the third pacer in the side after Starc and Hazlewood.

The only uncapped cricketer in the Australian camp, Cartwright is an all-rounder from Western Australia. Cartwright is a batting all-rounder whose First-Class record tells a far better story than in List A. The right-hander averages in excess of 45 in First-Class cricket, compared to an ordinary 26.50 with just four fifties in 27 List A matches. It remains to be seen what exactly Australian selectors have seen in the 24-year-old.

The upcoming ODI series presents Australia an opportunity to get into a winning habit, as the start has already been made at Adelaide. New Zealand too are coming off a series defeat to India, and historically they have not enjoyed much success in Australia. The hosts will hope this series provides them further relief. 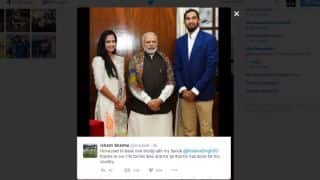