The idea to give room to Ireland to play one ODI each against two teams who have played far too often against each other than any other teams in the world does not make sense.

It is one thing that Australia are having four separate series against South Africa in the year 2016, but what the world champions should be commended for is the fact that they have taken time out of their busy calendar to play a game against an Associate nation. Ireland, who have travelled all the way to the African continent for two ODIs — one each against South Africa and Australia — will be glad that they have some stiff competition to face in the one-off ODI against the world champions, at the Willowmore Park in Benoni. Ireland have never in their history beaten Australia, and the world champions, who will be happy playing in the familiar conditions in South Africa, will be the more confident side among these two going into this game.

It is a well-known fact that due to similar conditions in South Africa, the Australian cricketers enjoy playing in the country, and ahead of their five-match ODI series against the hosts, the Steven Smith-led team would like to make a strong start. Australia will not be expected to break any sweat in the game against Ireland; perhaps this is exactly why they have also handed out his international debut to Daniel Worrall, the right-arm fast bowler from South Australia. It must be remembered that Australia had already rested two of their best bowlers — Mitchell Starc and Josh Hazlewood — for this tour and thus had selected as many as three uncapped players. With these three uncapped players and Smith returning to the side, it will be interesting to see how Australia go about their job.

But it is not about how Australia are doing and what is to be looked forward to; it is about Ireland. With a total of 11 ODIs scheduled for the Irish team in the year 2016, the team that has tremendous talent just cannot be expected to get better with time. For long, the supporters and well-wishers of the developing cricket sides have advocated for them to get adequate chances, but the money-mindedness of the top sides and the preference of cricketing powerhouses to play among each other most of the time certainly robs those that are not in the league. Ireland, Afghanistan and many others like them, even Bangladesh, are just not able to move on from their present state just because there is a severe dearth of opportunities. FULL CRICKET SCORECARD: Australia vs Ireland one-off ODI at Benoni

South Africa and Australia generally are two very balanced teams when compared. They have good batting depths, and their fast bowling attacks have always ruled the roost and both South Africa and Australia generally remain devoid of quality spinners. The pitches on which these two teams will be competing in the five-ODI series which looks meaningless even before it begins, are not going to provide any chance to either of Nathan Lyon or Imran Tahir (in case they are selected) to make a mark.

So what flavour does a South Africa versus Australia ODI series have? Zilch, especially when this is the third time within 12 months that they are playing against each other. And this is not all; South Africa will be travelling to Australia for a four-Test series in November-December, which does promise some exciting contest to look forward to.

For those uninitiated, Australia and South Africa first clashed in a three-match T20I series in the latter’s backyard right before the ICC World T20 2016. South Africa and Australia then met in a triangular series in the Caribbean in June, and their upcoming five-ODI series will be their third meet in a year and the Test series Down Under the fourth. With this much of overkill of South Africa versus Australia cricket, will there be any contest left to look forward to?

The idea to give room to Ireland to play one ODI each against two teams who have played far too often against each other than any other teams in the world does not make sense. If West Indies, who only have been on a downward spiral in Tests and 50-over cricket, did get one, so why not Ireland? And if their skills and past performances are concerned, West Indies have not done any great either. In 2015, West Indies played 15 ODIs, and won only 3. So far in 2016, the Caribbean side has won 3 out of their last 7 matches in the 50-over format.

Ireland deserved to be a part of a triangular series, just like West Indies, since it would also have given them a chance to participate in a more competitive cricket tournament than they usually keep playing. And since Ireland’s cricket calendar also shows no cricket fixtures in months to come, the team had all the more reason and time to participate in what could have been a triangular tournament in South Africa.

The Associate countries have for long suffered because of lack of opportunities, and the recent scrapping of the proposed two-tier Test cricket system also had them on the losing end. Had the two-tier cricket system been put into place, teams like Ireland and Afghanistan at least would have got a chance to play Test cricket against the likes of Sri Lanka, West Indies and Bangladesh (on the basis of current ratings and rankings). But it was not meant to be, and Ireland will now be forced to remain content with the blessing they have got from South Africa and Australia in form of an ODI each.

On their part, Australia and South Africa may show their FTPs and already-decided series which will begin in sometime, but if the biggies in cricket world are not going to extend their hand to lift up those who are inferior, how will the overall development of cricket happen? Rather than a five-ODI series, Australia and South Africa could have added Ireland as the third side, giving them a great opportunity to learn and grow, and at the same time, the two big teams could have played their cricket which for now does not look exciting. 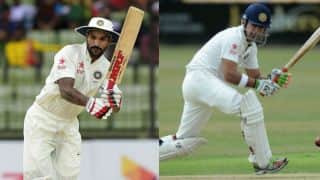