The last time when these two teams had clashed, New Zealand had thwacked a second-string Australian side in their backyard.

The Trans-Tasman rivalry will once again be seen in an ICC tournament, this time in the ongoing Champions Trophy 2017, as Australia face New Zealand. The Group A match in the ICC Champions Trophy 2017 will be played at Edgbaston, Birmingham, with the Steven Smith-led side looking firm favourites. The last time when these two teams had clashed, New Zealand had thwacked a second-string Australian side in their backyard. But with all key players back in the mix, Australia, who are on a rise once again, will look to make a winning start to the tournament. Let us take a look at the highlights of the key clashes. FULL CRICKET SCORECARD, ICC Champions Trophy 2017, Australia vs New Zealand Match 2

David Warner vs Trent Boult: With Warner back at the top in the batting order, New Zealand s first and foremost challenge will be against the batsman who is at the top of his game. Warner has been in a red-hot form, scoring more than 600 runs in the recently-concluded Indian Premier League (IPL) 2017. The onus to keep Warner quiet will be upon the left-handed pacer Trent Boult, who too had a successful IPL and is working up a lot of pace of late. One way to keep Warner quiet is to pin him down with tight lines, and Boult, with his pace, can be expected to carry out the job.

Steven Smith vs Mitchell McClenaghan: While it seems almost impossible to keep Smith under leash, but the left-handed pacer McClenaghan can be entrusted with the responsibility. McClenaghan is one of the most improved bowlers in recent times and his variations and ability to deliver accurate bouncers got him a lot of wicket in the IPL. With McClenaghan in the current form, New Zealand would want him to have a go at the best batsman in the world at present.

Chris Lynn vs Colin de Grandhomme: Australia would want to go full throttle in the first game of the tournament, which implies, an injury-free Lynn is likely to get the nod ahead of Aaron Finch. However, the position at which Lynn would bat cannot be ascertained but it will not be entirely wrong to have him partner Warner at the top. Pitted against him will be de Grandhomme, a bowler with plenty of tricks in his repertoire as well as pace. Lynn likes to get on the top early on and New Zealand will have to be wary of that factor.

Martin Guptill vs Mitchell Starc: Limited-overs cricket is the forte of Guptill and up against him will be the leader of the Australian pace attack. Guptill has blown hot and cold of late and Australia will want to exploit this shortcoming. Keeping this in mind, Starc comes across as the best bowler in the Australian ranks who would want to have a crack at the explosive New Zealand batsman.

Kane Williamson vs Josh Hazlewood: Two of the most disciplined and unrelenting cricketers in their respective areas, Williamson versus Hazlewood will make an enticing contest to watch out for. Hazlewood will be returning to England where he has had not-so-happy memories, and the class of Williamson ensures that he makes runs everywhere in the world. 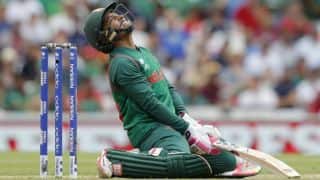