The string of losses may have dented their pride and image severely, but it is a thing of the past. Australia will want to make most of opportunity in discovering who their best players are, since this is their last home Test series before Ashes 2017-18.

South Australia quick Chadd Sayers can fancy being awarded with the Baggy Green at last, for Australia s first Test against Pakistan at their favourite hunting ground, The Gabba in Brisbane. Going against the tradition once again, Steven Smith has not announced the hosts XI for the first-ever day-night Test at this venue, adding that Australia are contemplating playing four pacers against Pakistan. If that happens, Sayers the fourth quick in the 12-man squad after Mitchell Starc, Josh Hazlewood and Jackson Bird may get a nod, something he has been waiting close to a year. The first of the three Tests begins on Thursday, with a lot at stake for both Australia and Pakistan.

Australia have lost all their previous three Tests to Pakistan since 2010. But at The Gabba, they have remained unconquered in last 28 years. If the trend has to remain in Australia s favour, the hosts will have to resume from where they left at Adelaide against South Africa, that is, playing good, hard cricket without any burden. The string of losses may have dented their pride and image severely, but it is a thing of the past. Australia will want to make most of opportunity in discovering who their best players are, since this is their last home Test series before Ashes 2017-18.

For Australia, apart from the idea of playing four pacers, no other change can be thought of in their playing XI from the last Test against South Africa. Australia will be the first Test side to play back-to-back day-night Tests. However, let us look at the likely XI for Australia:

Top order: Also known as The Turtle and The Reverend , Matthew Renshaw and David Warner, will form an opening pair. Renshaw passed the initial Test with two sturdy outings against South Africa. On the other hand, Warner, who has hit himself back into the form with two tons against New Zealand, will be ready to make the most of it. Warner had a quiet time in the first home Test series this Australian summer, and the run-machine will be eager to bounce back. At No. 3 will be Usman Khawaja, who will be playing against the country of his birth for the first time. Khawaja scored more than 340 runs in 3 Tests against South Africa, and he will be expected to carry on his form at home.

Middle order: The burden of providing Australia the solidity, which is needed off the middle-order, will be largely on Steven Smith, who will be followed by the likes of Nic Maddinson, Peter Handscomb and Matthew Wade. While Maddinson and Handscomb will need some time to find their feet in international circuit and get on with making significant contributions, the lack of runs from Wade will be a slight concern. Wade scored 4 runs in his last Test, but could not do much in the ODIs against New Zealand, which was a run-fest. Smith, in this scenario, will be needed to find richest of forms to guide his team.

Lower order: According to reports, Nathan Lyon is likely to make way for Sayers, who will be the fourth pacer in the Australian ranks. If that happens, Australia will be without a spinner as none of the other cricketers in the rest of the squad can chip in with even part-time spin. Sayers, who came to limelight ending the Sheffield Shield 2012-13 with 48 wickets in 9 matches, has the reputation of moving the ball at decent speed. He is not as tall as the other three fast bowlers or as quick as Starc and Hazlewood, but is regarded for his sideways movement that tends to get him a lot of success. This is the only change Australia might make to their playing XI, but they will face tough time in selecting an untested bowler against Lyon, who has grabbed 24 wickets at 23.95 in 5 Tests. Smith has already said the selection of the fourth pacer will depend on the amount of grass that is there on the wicket on match day.

Starc will remain Australia s key weapon against Pakistan, while the tourists will have to watch out for Hazlewood, who tends to chip in with a lot of wickets, while the focus remains on his left-arm bowling companion. Bird, in all likeliness, will continue to retain himself in the side. 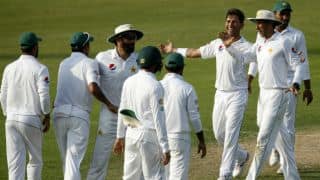 Pakistan vs Australia, day-night Test at The Gabba: Likely XI for Misbah-ul-Haq and co.