Mitchell Starc and batsman David Warner dominated on Day One of the first Test at Perth, trailing by 137 runs with all wickets in hand.

A pitch that favoured the pacers with the right bounce, Mitchell Starc and batsman David Warner dominated on Day One of the first Test at Perth, trailing by 137 runs with all wickets in hand. South Africa entered the three-Test series with confidence after whitewashing Australia in the One-Day International (ODI) series by 5-0. There was a little war of words between both the teams ahead of series with Dale Steyn targeting Steven Smith and co. with the snake theory and in return Smith provided the perfect reply with his bowlers and batsmen ending the day with an all-round performance. Peter Siddle also challenged Faf du Plessis and co. with the Proteas middle-order lacking depth. FULL CRICKET SCORECARD: Australia vs South Africa, 1st Test at WACA, Perth

However, the prediction did come true as South Africa batsmen collapsed early on and were gone cheaply. With combined efforts by Josh Hazlewood, Siddle, Nathan Lyon and Starc, South Africa were stuttering through the day. Du Plessis who scored a century in the tour match did try to boost in the middle-order, however, it all belonged to a patient knock and fifties by Temba Bavuma and Quinton de Kock, who helped the Proteas push to the 200-run mark. Some surprising boundaries by the lower-order batsmen Dale Steyn and Kagiso Rabada added further impetus.

There were some athletic skills that could be witnessed by the Marsh brothers along with Starc s comeback and Warner s run riot that stole the show at Perth. Shruti Hariharan presents to you some of the highlights that entertained the WACA crowd:

Marsh brother s classic catches: South Africa won the toss and elected to bat first. Dean Elgar and Stephen Cook started the innings while Starc began the attack with the new ball. What unfolded in the third ball of the first over, not only surprised Starc but left the Australians astonished. Mitchell Marsh flew at gully to dismiss Cook for a duck. Similarly, the elder brother, Shaun Marsh, also grabbed the spotlight for yet another brilliant catch at short leg. Bavuma has shown these acrobatic skills earlier. An inside edge hit Bavuma s thigh pad and senior Marsh dived, leaving the Australians stunned by saving the ball kissing the ground to take a blinder.

Good Morning for Australia: It was indeed the perfect start that Australia received at WACA. Starc drew the first blood on first over, dismissing Cook for a duck. But it was Hazlewood, who ruled the first session with his figures of 2 for 26 claiming the wickets of Elgar and Amla. By the 12th over, South Africa were struggling at 32 for 3. They needed a healthy partnership to help the Proteas from a precarious condition. Siddle marked his comeback with the wicket of JP Duminy, leaving South Africa baffled. Indeed, it was the perfect morning for the Australians.

Missed opportunities: Australia did have their day with the bat and ball, but a team that is known for producing some of the best fielders, saw them faltering at many points. Before being dismissed, Elgar got lucky as Usman Khawaja had almost carried his wicket on his left hand, however, failed to close his palm at the right time. It would have been Starc s second wicket then and also be added to the list of classic catches for the day. The second time was when Lyon almost got his fingers, standing at the cover-point and yet another catch that missed the list of classic catches had he got his hand on it. JP Duminy was lucky and was dropped playing on 10.

Temba Bavuma, Quinton de Kock – the saviours: Opting to bat first, South Africa were rattled by the Australian pacers in the first session. However, after Lunch, the fortunes changed for South Africa and Bavuma s patient knock led him to his second fifty. He got his fifty off 84 deliveries that included 7 fours. But after Bavuma was caught by senior Marsh, de Kock continued to rule and got to his fourth fifty of his Test career that included 11-fours and a six. If it was not for their fifties, South Africa would have been bundled out for 150. Their partnership also formed the thrust for the run fest with a 71-run stand for the sixth wicket.

Keshav Maharaj the surprise element: When the South Africa XI was announced, the name Keshav Maharaj raised eyebrows amongst the cricket experts. With no experienced bowlers like Morne Morkel or Kyle Abbott, the bowling expertise relied on the pacers Steyn, Vernon Philander and Kagiso Rabada along with left-arm orthodox spinner Maharaj. But it was not the ball that put Maharaj in the spotlight; his bat that thumped his entry in the Test arena. He showed some spunk with the bat when he pulled a six on Starc s delivery in his maiden Test innings. He was first off the mark with a boundary and put up decent 16 on board. He added much-needed partnership of 48 runs with de Kock. That is some entry by Cook, (oops) Maharaj!

Starc is back: He might have been out of the picture for the ODI series against South Africa, thanks to his love affair with an injury. Starc left no stone unturned to begin the series with wickets. Starc was on target as he got the wicket of Cook first and screamed with excitement, marking his comeback in Test arena. He also grabbed the wicket of the skipper du Plessis and Adam Voges making no error to capture this wicket. The third one took a while but before heading for tea, Philander was bowled by Starc. The South Africa innings was wrapped up by the final wicket of Steyn with a perfectly full and straight delivery by Starc, to bundle out the Proteas.

David Warner s run riot: Steyn used the right term to describe the Australian line-up snake theory . Warner is the top of snake body and a venomous snake, who always remains hungry for more. He was off the mark with a boundary and got to his fifty with a boundary of just 39 deliveries including 10 fours and a six. Marsh did struggle but complimented Warner with his valuable 29 runs, leading to an unbeaten opening stand of 105 on Day One. Warner is batting on 73 and can run into his century on Day Two.

Dale Steyn and his struggle with the short ball: Steyn looked aggressive but his short balls caused further dismay for South Africa, with Warner pulling them for boundaries and that six smashed to the third man. Steyn began with bouncers that made senior Marsh anxious, leaving almost most of the deliveries. Not many a times one would find Steyn going at 150kph. Beginning with 140kph and going for 150kph, the length was perfect. But at the end Warner, Marsh were bowled short balls, paving the way for Australia. Warner also had his moment of lofting Steyn’s short ball out of the middle-stump, arching himself all the way to find himself on the ground. Some chuckles between Steyn and Warner after those boundaries, but it favoured the hosts, ultimately. Mitchell Starc: Even contest between bat and ball at Perth on Day 1 vs South Africa 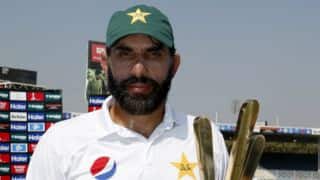