Australia recorded a thumping seven-wicket victory in what was a must-win encounter.

Australia stormed back in the second T20 International against South Africa at Melbourne on Friday. They recorded a thumping seven-wicket victory in what was a must-win encounter. Indrajit Dutta looks back at some of the key moments of the game.

Doug Bollinger scalping the dangerous Quinton de Kock in the first over of the match:  South Africa were on the backfoot right from the beginning thanks to Bollinger having de Kock caught behind by Dunk.  The opener chased a ball that seamed away and bounced a bit more he reckoned it might have picking.  It wasn’t a very good shot from de Kock. A waft outside the off-stump the shot could be described as. The slight amount of away swing  and extra bounce played their part here. All these factors combined with an forgettable stroke brought about de Kock’s downfall and set the tone for some Australian domination.

De Kock in the earlier T20 at Adelaide  had played a valuable knock of 46. Together he and Rilee Rossouw had seen to it that Australia would not have a chance in that game. Here at Melbourne it was a different story. Here Australia had thrown the first punch and South Africa never recovered from it.

Rilee Rossouw’s dismissal in the second over: Rossouw was on 12, all his scoring shots had been boundaries. He was looking threatening. Faulkner then ran and then produced slower ball. The South African tried to swing toward the leg-side but he was taken in by the lack of pace, as a result he only succeeded in hitting the ball to Faulkner who took a good diving catch. Faulkner had outfoxed the danger man. South Africa were in trouble at 14 for two.

Cameron Boyce has Reeza Hendricks stumped: The home-side were keeping things tight. There had not been a big over yet. The tourists desperately wanted that big over which could give them a push. At  the end of the eight over the score was 44 for two. Boyce, the leggie was introduced into the attack.  His first delivery is a flighted one which Hendricks looks uncertain while playing. Two singles come off the next two balls.

Boyce runs in, he gives the ball some air, Hendricks is down the track,  he swings and misses the ball. Dunk does the rest. Boyce has played on Hendricks’ frustrations and deceived him. South Africa have been pegged back just when they were showing signs of a recovery.

Aaron Finch gets going with two boundaries off Kyle Abbott in the third over:  With only a 101 to defend the Proteas needed to strike early. They, however, did not. Dunk started the boundary flow in the second over.

Finch decided to get into the act in the third over. He had not been in the best of form before this game and these two boundaries would have made him feel better. The first four he hit off a delivery that was short and wide,  Finch made of the most of such an offering.

Abbott then not learning from his mistake bowled another delivery and the result was the same. Australia T2o captain was  up and away.

Watson hits Ryan McLaren for four fours in one over: Wayne Parnell had given some hope by removing Ben Dunk for 23 in the fourth over. In walked the muscular Shane Watson. The all-rounder had contributed with 47 in the earlier game.

Duminy was trying to unsettle the Aussie batsmen by constantly ringing in the changes. Here he had replaced Parnell with McLaren. This move did not pay off. McLaren first ball was short and wide, Watson hammered hit it to the boundary. The next ball did not produce a run.

His third ball was a pitched up one slightly outside the off-stump. Watson used all his might and drove it for four.  The next ball was short but the result was the same as the burly Australian hammered it toward the mid-wicket boundary. By this time McLaren appeared to be all at sea against Watson. His next delivery was drifting down slightly toward the leg, Watson took advantage dispatched it for four. By the end of the over Australia had raced to 70 for one off seven. Only thirty two were from 13 overs. In the end it was a cakewalk for them as Finch with an unbeaten guided them home with nearly seven overs to spare. 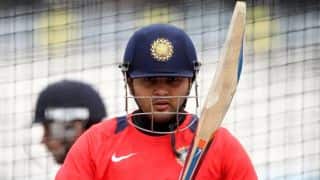 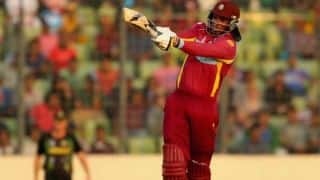