Any adjective may fall short of describing the horror day which Australia had against South Africa at Hobart in the second Test.

Any adjective may fall short of describing the horror day, which Australia had against South Africa at Hobart in the second Test. By the end of a mortifying day in the history of the Australian cricket, the touring side was ahead by 86 runs in the first innings, having bowled out the hosts for a paltry 85. It was a terrific day for South Africa, who is rapidly emerging strong from their transitional phase and they have been completely dominating against Australia so far in their recent meetings. South Africa, who have the second Test in their complete command, will take field on the second day with a nothing less than a quick finish in mind. LIVE CRICKET SCORECARD: Australia vs South Africa, 2nd Test at Hobart

A quick end to the second Test will not be surprising at all. Australia have been poor against swing and seam and the story remained the same when they were asked to bat first by South Africa on a cloudy morning at Hobart. David Warner made the error of chasing a delivery way outside the off, and the rest of the batting fell apart without putting up any sort of fightback. Vernon Philander returned with the figures of 10.1-5-21-5 and Kyle Abbott returned with 12.4-3-41-3. ALSO READ – Australia vs South Africa, 2nd Test, Day 1: Highlights

South Africa s lead in the first innings is one run more than what Australia managed in the first innings. The social media remained flooded with the jokes around Australia s inability to bat, and that the tourists had scored enough to extract a win out of what they have on the board by the end of the opening day. However, it was not the case that the entire Australian team had a horrendous time, there were two players who stood out of the rabble that the hosts produced.

Desperately needing a victory and some runs, Steven Smith was at least able to meet one of the requirements. On a wicket where Philander and Abbott wrecked havoc on his batsmen, the right-hander Smith stood tall with his innings of 48 not out off 80 ball with 5 boundaries. Smith s footwork and resilience at a time when everyone around him fell was certainly a delight to see, and it was not the only highlight of the day.

Rapidly, Mitchell Starc is emerging as the lone force in the Australian bowling line-up. The left-arm tearaway pacer turned up the heat on Australia in the final session, when South African openers Stephen Cook and Dean Elgar were dismissed off the first ball that they faced in the session respectively. Starc bowled with a lot of pace, but he was not exactly supported by the other Australian bowlers when he was going full throttle.

Talking a little more about the Australian innings, there were only two batsmen who got to double figures. While Smith remained unbeaten on 48, the debutant Joe Mennie struck two beautiful boundaries to reach 10 off 22 balls that he faced. Otherwise, it was a complete shambolic performance from the remainder of the team wherein Warner made 1, Joe Burns scored 1, Usman Khawaja got 25-ball 4, Adam Voges fell for first-ball duck, debutant Callum Ferguson was run out for 3 and Peter Nevill scored 3.

South Africa made a strong start, but they did stumble in between. Right-handed batsman Cook scored 23 off 49 balls with 2 boundaries and Elgar, who had vowed to frustrate Australia even more in this Test, did well to face 61 balls and managing 17 runs. Hashim Amla did show some form, but he was unlucky to have missed out on a deserving half-century. Amla was quick in his innings of 47, facing 67 balls and striking 5 boundaries. While JP Duminy and Faf du Plessis fell for 1 and 7 respectively, Temba Bavuma and Quinton de Kock ensured that South Africa ended the day on a high. Bavuma reached 38 off 85 balls with 5 boundaries, and de Kock was on 28 not out off 40 balls with 3 boundaries.

On the second day, South Africa will resume being in a strong position with a lead of 86 runs. If the tourists are able to add another 150 odd runs to their total, they might find themselves in a position to have out-batted Australia from the contest. Clearly, after a string of batting collapses in the three-Test series in Sri Lanka and even in the opening Test of this series at Perth wherein Australia lost by 177 runs Australians are low on confidence as far as batting is concerned and this will continue to haunt them in the games to come. However, it is rapidly turning out to be a do-or-die situation for many in this Australian side, and they will have to arrest the damage that has been caused. 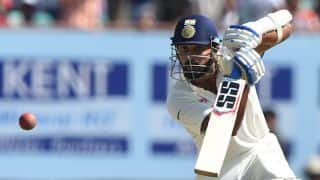 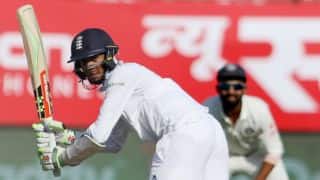