Perth, a place where South Africa have not lost a Test and won their last two against Australia.

The last time South Africa left Australian shores with frowned faces was in the Southern Hemisphere summer of 2005-06. Australia, led by Ricky Ponting and his heroics, had downed South Africa 2-0. The Australian side of then were world-beaters and were invincible at home. Three years later, Graeme Smith, JP Duminy and Dale Steyn wreaked havoc in the Australian camp, winning 2-1. The win in the first Test at Perth was perhaps one of South Africa’s finest. Brilliant efforts from Smith, Hashim Amla, Jacques Kallis, de Villiers and JP Duminy saw the visitors complete a 414-run chase against a bowling attack that boasted Mitchell Johnson, Brett Lee and Peter Siddle. The Perth track was still fast and hostile. Full Cricket Scorecard: Australia vs South Africa 1st Test at Perth

Four years later Smith’s men arrived again Down Under and after two intensely fought Tests, South Africa played at the party-pooper for Ponting by spoiling his farewell at Perth with a win and in turn clinching the series. The series was all about the then Australian skipper Michael Clarke’s heroics with bat. While Australia relied to their leader, South Africa put up a better team show that contributed to the win. Amla and Kallis were at their consistent best, while de Villiers stroked touches of geniuses in an attractive canvas gleaming with teamwork. The man, who is at the centre of discussion, Faf du Plessis stamped his authority in an area called ‘Test cricket’.

In absence of the force and their skipper named de Villiers, the onus is on his childhood buddy du Plessis to maintain the over a decade old tradition of winning in Australia. It will not be easy, but then, nothing is easy in Test cricket. In fact, beating Australia at home is something that only South Africa has been able to inflict in recent years. England did win the 2010-11 Ashes, but that was preceded and followed with 5-0 routings. No side has been able to dominate Australia in Australia like the Proteas.

“If you can cut off the head of the snake, the rest of the body tends to fall. We have done that in the past. We have tried to attack the captain because he is the leader and if we can cause a bit of chaos there, sometimes it does affect the rest of the guys,” Steyn launched an open attack on the already under pressure Australian skipper Steven Smith.

Smith is also the No. 1 ranked Test batsman. In the last two years at home, the Sydney bloke has amassed 1,264 runs from 10 Tests at a Bradmanesque 97.23. Adam Voges, David Warner, Usman Khawaja and Shaun Marsh have been exceptional too but it is Steven Smith who will the subject of major target.

Steyn is confident that South Africa will repeat their heroics of the past two tours and speaking more on Smith, he adds: “He leads the ship so when you pull the plug on that kind of ship, and he is holding it, you can sink it. It’s not very easy but there’s a way to sink it.”

Steyn is rated the No. 2 Test bowler in ICC Test rankings. Injuries have hampered Steyn’s progress over the past two years and that cost him the top spot, and South Africa paid with their fall from the top spot. Now fit and raring to go, Steyn was brilliant against the visiting New Zealanders and he will be raring to go at Australia.

South Africa have a good pool of pacers to choose from. Steyn has the support of the likes of the highly rated and talented Kagiso Rabada, Vernon Philander, the 2012-13 Australia tour star Morne Morkel and the ever-dependent Kyle Abbott.

Opener Stephen Cook has not been amongst the runs, managing only 17 from his 3 warm-up knocks. Dean Elgar will derive confidence from the hundred he scored against South Australia at Adelaide. The batting pillars rest on the shoulders of captain du Plessis and former captain Amla, who was South Africa’s highest run-getter the last time they toured here.

This may be the series, which will elevate wicketkeeper-batsman Quinton de Kock’s reputation to the next stage. He scored a 103-ball 122 and a 94-ball 99 in the two innings he batted in the warm-up games. He has been striking cleanly for a while and undoubtedly, the 23-year-old is the finest batsman in his age group in international cricket.

De Kock’s misfiring in the ICC World Cup 2015 in the same country is not a distant memory though. When things go his way, the excitement only multiplies but when he is not getting going, he cuts a sorry figure.

De Kock s a-ball-is-a-ball theory helps keeping things simpler. Under lights, however, the pink ball presents a different challenge altogether. How the batsman cope with the Mitchell Starc and Josh Hazelwood threat will determine their fortunes. Not to forget the Australian batting who have phenomenal numbers at home, however in the recent times they have not been tested against a full-strength pace attack as good as South Africa’s.

The atmosphere in Australia smells autobiographies with the once champions washing their dirty linens in public. While Clarke and Brad Haddin, the sledge champions in their days, have adopted the saint approach and asked the current side to focus more on cricket than sledging, the Proteas are up for the verbal challenge.

Philander has made it clear that if needed he can strip off the ‘nice guy’ suit. “Moments are going to get heated, but you as a person have to be stay calm and collected,” he said.

Du Plessis admitted after the ODI series win against Australia last month that this Australian side is better-behaved side than the ones of past. Smith does not believe in the sledging culture and Warner has become subdued, a fact not approved of by many former Australians. Though in a high intensity series between two very competitive sides, one can expect heated moments. At least the pre-talks have begun.

Australia are ranked No. 3 in ICC Test Rankings while South Africa find themselves at the fifth spot. Both sides suffered similar fate that pushed them off the pinnacle positions. South Africa, No. 1 till December 2015, were annihilated 0-3 by India and later humiliated 1-2 by England at home.

Australia climbed to the top stop early this year but an embarrassing 0-3 whitewash against a lower-ranked Sri Lanka at the latter’s den resulted in their fall from the cliff. Though Australia are better ranked and have the home advantage, South Africa have the momentum.

Australia last Test series was a huge psychological blow for them, a 0-3 clean sweep for a rebuilding Sri Lanka. Meanwhile, South Africa have beaten a competitive New Zealand at home.

Worse, when these two teams squared off for a five-match ODI series against each other last month, South Africa downed Australia 5-0. The egos of the world champions were shattered and this scoreline has put further pressure on Smith’s captaincy.

A 5-0 ODI scoreline is a big brag point, but when the ball changes to pink and red, it becomes a different ball game. We are aware of how good Australians are at turning around things. Remember 2013-14? Another series loss in England and a few months later, in Down Under, the Englishmen were routed 5-0 as the urn changed hands again.

However, come Thursday, the venue is Perth, a place where South Africa have not lost a Test and won their last two. Quoting Steyn, “If we go fist to fist, let us just see who can fight the longest and then you will find your winner.”

Yes, in all likelihood, it will be this close.

(Suvajit Mustafi consumes cricket for lunch, fiction for dinner and munches numerous other snacks throughout the day. Yes, a jack of several trades, all Suvajit dreamt of was being India s World Cup winning skipper but ended up being a sports writer, author, screenwriter, director, copywriter, graphic designer, sports marketer , strategist, entrepreneur, philosopher and traveller. Donning so many hats, it s cricket which gives him the ultimate high and where he finds solace. He can be followed at @RibsGully and rivu7.) 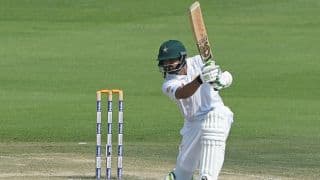