March 27, 1991. At Georgetown, Guyana, Dean Jones suffered a bizarre dismissal, bowled off a no-ball, he was run out as he walked towards the pavilion. Arunabha Sengupta recalls the day when a mistake by the umpire brought relations between two teams to a breaking point. 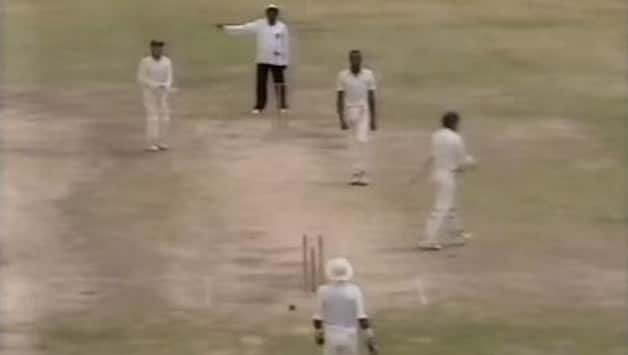 Dean Jones (right) walks away in the mistaken belief that he was out bowled. Jones had not seen or heard the call from umpire Clyde Duncan. The West Indians picked up the stray ball and broke the wicket, even as non-striker Allan Border was yelling at Jones to get back to the crease.

March 27, 1991. At Georgetown, Guyana, Dean Jones suffered a bizarre dismissal, bowled off a no-ball, he was run out as he walked towards the pavilion. Arunabha Sengupta recalls the day when a mistake by the umpire brought relations between two teams to a breaking point.

As Dean Jones walked in to bat, Australia were 67 for three on the fourth afternoon, still a long, long way from making West Indies bat again. Courtney Walsh had just uprooted the stumps of Geoff Marsh. In different parts of the field, Curtly Ambrose, Malcolm Marshall and Pat Patterson stood, menacing figures itching to have a bowl. In the stands, the steel bands of Guyana played “Killing Me Softly.”

The Australian middle-order batsman was not new to the Caribbean intimidation of the eighties. He had made his Test debut at Port-of-Spain during an earlier tour in 1984. Joel Garner had been on rampage and Jones had been ill. He had stuck around long enough to score 48.

West Indian captain Viv Richards had congratulated Jones on his debut. In the dressing room of the home team, he had offered the youngster a beer. As the bottles had clinked together, Jones had been distracted by Garner. And Richards had gone ballistic. “Don’t you disrespect me, maan! When I say cheers, Deano, you look into my eyes when you say cheers and mean it,” the great man had yelled.

Seven years later, as he walked out to bat at Bourda, Jones perhaps felt a sense of déjà vu. The West Indians were the same proud lot, closing in for the kill. Viv Richards stood lurking in the slips. Not much had to be done with regard to marshalling his resources in the field. The four fearsome fast bowlers running in knew what was to be done.

At the other end was the same Allan Border, who had batted alongside him on the day of his debut. On that day, the Australian left-hander had saved that Test with unbeaten knocks of 98 and 100. This time around, Border was the skipper. In the West Indian innings, he had done what his bowlers had been unable to. With Desmond Haynes and Richie Richardson blasting their way to hundreds, Border had proceeded to bowl the longest he had ever done in his career, ending up with five for 68, including a nine-ball spell of four wickets without conceding a run.

Now, the gritty Australian skipper stood fighting at one end as Jones walked out.

At the square-leg, stood Clyde Cumberbatch, the same umpire who had officiated in the debut Test of Jones. And he was to play a significant role in the bizarre events that followed.

Bowled and run out

Two overs later, having made three, Jones faced Walsh. The ball was full, fast and darted into him. Jones, committed on the drive, was beaten by the pace and found his middle-stump flat on the ground, while the other two sticks were askew.

The fielders were jubilant, and a resigned Jones took off his helmet and gloves and began his walk towards the pavilion — which, at Bourda, was in the direction of extra-cover.

Very few had heard the no-ball call from umpire Clyde Duncan over the din of the crowd and the tunes of Killing Me Softly. Dean Jones had not. Allan Border had. The West Indian fielders realised what had taken place when they saw the arm of the umpire, extended in the signal that breaks the bowler’s heart on such occasions.

There was sudden fury of movement. Carl Hooper from slip and Desmond Haynes from silly mid-off rushed in.

Dean Jones, walking away unaware of the hasty developments, suddenly heard the loud yell from his captain. Jones explained to The Age newspaper, “When you see all three stumps on the ground, normally it is time to go. I took my helmet off and gloves, while AB was yelling at me to get back to my crease.” He turned and made a desperate dash for the crease. But Hooper had a head-start on him. He had grabbed the ball and uprooted the stump that still stood, with Jones far short of his ground.

The confused Jones walked back. The commentators on air — Ian Chappell among them —reacted by lauding the West Indian fielders for their quick thinking. It was quite a while before Law 38.2 surfaced in the discussions: “If a no-ball has been called, the striker shall not be given run out unless he attempts to run.” Jones had not made any attempt to go for a run.

Slowly it dawned on the teams, the media and the public that Cumberbatch had made a blunder. However, the laws of cricket had solidly thrown the rule book at the possible solution of reinstating the batsman.
To recall a batsman who has been declared out, the reversal of the decision needed to take place before the next batsman had come in to bat. But, Mark Waugh was already at the wicket, and unbeaten at tea, when Bobby Simpson, coach of the Australian team, got together with the umpires.

Cumberbatch was sheepish in his response. While admitting that a mistake had been made, neither of the umpires could offer a remedy. Captain Viv Richards was informed by the Australian team that there had been a gaffe. His response reportedly was, “Bad luck, it’s a Test match.”

The Australian side was furious, but decided to get on with the game. However, the incident did have its effect on the innings. By the end of the day, they had lost three more wickets and surrendered early on the final morning.

As the news of the blunder made rounds, an effigy of Cumberbatch appeared on the stands. According to Wisden Cricket Monthly it was made to perform “a macabre dance from a noose”.

According to Jones, the two teams did not speak for the next few years.