Australia s selectors are expected to sit this week to name the squad for the Test series against India starting December 6 in Adelaide.

The statement of Australia s Test captain Tim Paine last month that the leading run-getters of the ongoing 2018-19 Sheffield Shield are seriously within reach of a spot in Australia s Test squad for the home summer opener against India has shone the spotlight on several contenders.

After four rounds of the Sheffield Shield, the top four batsmen are Tasmania s Alex Doolan (444 at 55.50), Victorian Marcus Harris (437 at 87.40), discarded wicketkeeper-batsman Matthew Wade (412 at 82.50) and South Australia s Tom Cooper (392 at 56). At fifth is Shaun Marsh with 362 from just two matches, which coupled with his ODI hundred recently puts him at the front of the line, ostensibly.

With Usman Khawaja not 100% for the first Test and Aaron Finch set to drop down the order after opening in the UAE, Australia s batting is far from settled. Australia s selectors are expected to sit this week to name the squad for the Test series against India starting December 6 in Adelaide.

Here s a look at the Test hopefuls.

His place in Australia s Test team under scrutiny after 12 innings without a fifty, Marsh this week delivered a timely reminder of his batting skills with an unbeaten 163 in a five-wicket win for Western Australia. Since returning to Australia after a poor Test series against Pakistan in the UAE, where he managed 7, 0, 3 and 4 to extend a lead phase dating back to the Ashes in January, Marsh has scored 80 and 98 in a seven-wicket Shield win over Tasmania followed by 22 and 106 in two ODIs against South Africa after being set back by an abscess on his buttock.

Wade, 30, has not played a Test for Australia since September 2017 with Paine a surprise recall later that year when England arrived for the Ashes. Wade was axed after averaging under 20 in 10 Tests since being called back in November 2016, and his return to Shield cricket began with scores of 1, 6, 9 and 17. However, strong scores as the season continued, as well as a dominant start to the current one, have propelled him back into the reckoning as a specialist batsman.

If picked, Wade would feature as a specialist batsman because Paine will keep wickets. He could slot in at No 4,

A top-order batsman, Doolan is competing with Matt Renshaw and Harris for one of the opener s spots. If Khawaja is not fit, Doolan could slot in as opener but also fits the bill for a one-down option.

The 26-year-old has made a strong start to the domestic season, highlighted by a unbeaten 250 against New South Wales. Since then, his scores have been 65, 7, 22 and 67. There is plenty of chatter about his skills and how he s ready for Test cricket, with former Australia batsman Dean Jones telling CricketCountry recently that the Victorian batsman should be picked for his phenomenal run-scoring over the past few seasons.

An opener, Harris would be best suited to facing the hard ball. If Khawaja is picked, it is likely that he bats at No 3 so that opens up two spots ahead with Harris, Renshaw and Doolan the top three picks.

Handscomb, 27, has not been given a chance to add to his 13 Test caps since the ill-fated tour of South Africa in April where he was 12th man for the Newlands Test where the ball-tampering scandal broke.

He captained Victoria to the JLT One-Day cup title in October, in the process scoring 361 runs in seven innings at an average of 51.57, with four half-centuries. He was named Player of the Match in the final against Queensland for scoring 49 off 45 balls and taking four catches behind the stumps while marshalling his players superbly in a 110-run win. Since the Sheffield Shield got underway, Handscomb has made 27, 48, 123, 2, 4 and 23. Not great numbers, but Handscomb s ability to play spin could see him brought back.

A middle-order batsman, Handscomb could bat at 4, 5 and 6.

The South Australia batsman – who has played 23 ODIs and 18 T20Is for Netherlands – has scored the most hundreds (two) this Shield season. His name has not been taken in the same breath as the likes of Harris and Doolan, but Cooper has runs to his name.

Where could be bat?

The 31-year-old bats in the middle order for South Australia and could be a No 5 and 6 option for Australia is the selectors look past Travis Head and Marnus Labuschagne. 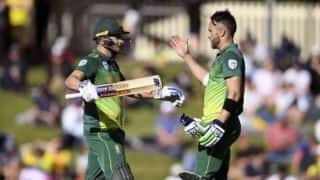 India vs Australia, 1st T20I, LIVE streaming: Teams, time in IST and where to watch on TV and online in India