With the ICC World Cup 2015 just months away, all the teams are trying to improve their performance with every passing day. Each series the teams play prior to the World Cup gains its own importance, as this is the phase in which the teams can experiment with players who look promising enough to make it to the final squad. Some teams might like to perform better in these matches in order to create an early pressure on the opponents and gain enough momentum before heading into the tournament.

Taking into consideration the recent form of Australia and their performance in the ODI format, they have been simply outstanding. Especially this year so far, their record has been remarkable with a good amount of matches as well as series win. The Aussies have played 18 ODI matches this year and have won 13. They started the year, winning the ODI series against England at home 4-1 in January. It was followed by the tri-series in Zimbabwe featuring South Africa as the third team where the Proteas edged them out in the final.

However, they bounced back in the series against Pakistan in UAE and surprisingly won the series 3-0 as they whitewashed and outclassed Pakistan in every department of the game, even in testing conditions there,. It was followed by the recently concluded five-match ODI series against South Africa at their home, which they won 4-1, despite a close contest in a couple of games.

Taking into consideration Australia’s performance following the World Cup loss to India in the quarterfinals – they have played 18 ODI series since then and have won 11 of them, which includes five home wins. Overall, they have played a total of 78 ODI matches, since the World Cup loss in 2011 and have won 44 of those games which is quite impressive and thus proving that they have an average winning record percentage of about 56.41 per cent.

Apart from from hosting the World Cup at home, there is another psychological advantage that could come into play during the World Cup – the status of being the No. 1 ODI team in the world. Having claimed the top-spot in the ICC ODI Team Rankings and moving into the tournament would surely boost their morale and confidence. Australia will come out all guns blazing and could well be a nightmare for most of the teams in the tournament.

However, before the World Cup begins, they have one final task ahead and that is to play a tri-series featuring India and England. With India being the defending World Champions and running high on confidence after whitewashing Sri Lanka 5-0 recently back at home, it would also be an uphill task for Australia to restrict them, India may have had a poor record travelling abroad in Tests, but ODIs have often been India’s forte.. England on the other hand have struggled of late in the ODIs, but have the ammunition to cause major upset right before the World Cup.

Thus, with mainly India and Australia set to battle it out for the top spot before the blockbuster event of 2015, Australia need to consider the series as the biggest challenge of the mega event. Nonetheless, considering Australia’s performance off late it could well be a another opportunity for the World Cup hosts to continue their domination. 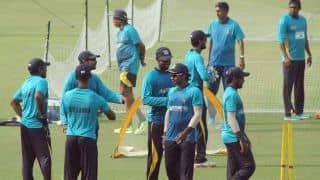