Raja Azeem Hafeez, born on July 29, 1963, was a left-arm fast bowler who represented Pakistan between 1983-85. Despite the handicap of two missing fingers since birth in his right hand, Hafeez performed incredibly well in international circuit. Sarang Bhalerao looks at the career of the man who was known for bowling marathon spells for Pakistan. 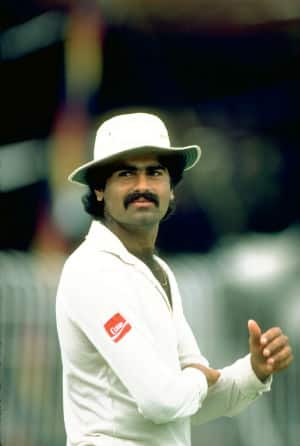 Raja Azeem Hafeez, born on July 29, 1963, was a left-arm fast bowler who represented Pakistan between 1983-85. Despite the handicap of two missing fingers since birth in his right hand, Hafeez performed incredibly well in international circuit. Sarang Bhalerao looks at the career of the man who was known for bowling marathon spells for Pakistan.

Azeem Hafeez is an inspiration to millions of aspiring cricketers. He taught people a life-lesson: No obstacle in life can be big enough if you have power to chase your dreams. When you consider the fact that Hafeez’s right hand had two fingers missing, you wonder how he must have played cricket — especially at the highest level. How could he take the catches? How could he hold the bat? Yes, that was the same question even the cricketing world wondered when there were newspaper articles written about his handicap.

Hafeez had to undergo rigorous fielding drills to prove that his ‘handicap’ was no handicap. At the end of the day he passed these tests easily and overcame the hurdles of Doubting Thomases. No one could stop him from following his ultimate dream: to don Pakistan colours.

Hafeez started playing cricket in 1977-78 in the bylanes of Pakistan. He stayed close to the legendary Hanif Mohammad whose brothers Mushtaq and Sadiq too were established Test cricketers. The presence of these cricketers in the same mohalla gave Hafeez the motivation to play well. He learnt nuances by playing the cricket in the narrow aisles near to his house.

Hafeez’s parents put great emphasis on his studies because of the physical challenges. He managed to pass class 12 exams. But later his passion for the game took over. He was selected to play for Karachi Under-19 and Pakistan Under-19. Eventually he got a call in the national side for the tour of India and his parents by that time supported his cricketing aspiration.

Although Hafeez had a limited First-Class experience he had the propensity to bowl long spells. He was rushed into Test cricket after Pakistan spearhead Imran Khan suffered a shin injury.  Before the tour Pakistan selector Colonel Naushad asked Hafeez if he could bowl long spells for two hours. Hafeez was confident and thus his role on his maiden tour was to be the workhorse of Pakistan attack — to bowl long spells.

Hafeez bowled 116 overs in the three Test matches in Bangalore, Jalandhar and Nagpur and picked up 10 scalps. The most talked about wicket which made him the instant star was that of Sunil Gavaskar in the second Test at Jalandhar. Gavaskar was bowled round the legs for five which made headlines in Pakistan newspapers.

The tour Down Under

Hafeez bowled long spells in Pakistan’s tour down under in 1983-84. He picked up five for 100 in the first Test in Perth but Australia scored 436 on a bouncy wicket.  Pakistan suffered an innings defeat as no batsman looked comfortable against the rising ball.

Hafeez registered his second five-wicket haul in Adelaide: five for 167 in 38.2 overs. Pakistan bowled out Australia for 465 and scored 624 themselves as Mohsin Khan, Qasim Umar and Javed Miandad scored centuries. With a lead of 169 runs, Pakistan bowlers had their work cut out. Hafeez picked up two wickets in the second innings but Australia managed to draw the game.

Heroics in Lahore against arch rivals

Pakistan scored 428 in the first innings courtesy of an unbeaten 168 by captain Zaheer Abbas. India started their first innings on a disappointing note losing opener Anshuman Gaekwad to Jalal-ud-din for four.

To Hafeez’s delight he started to find swing and rhythm in his bowling. In no time he dismissed Vengsarkar (41), Gavaskar (48), Sandeep Patil (0), Ravi Shastri (0), Kapil Dev (3) and Chetan Sharma (4). In no time Indian innings collapsed from 94 for one to 156 all out. Hafeez’s six for 46 (his best figures in Test cricket) had helped India follow-on.

Hafeez picked up only one wicket in the second innings as India saved the Test after Mohinder Amarnath scored a century. But Hafeez’s seven wickets on a placid track was a lion-hearted performance for which he was awarded player of the match.

Pakistan had a young left-arm pacer Wasim Akram who was very impressive. His role model was Hafeez. As a youngster he once went searching for Hafeez’s house. It was a huge honour for Akram to talk about the nuances of fast bowling at his idol’s place.

Both Hafeez and Akram were part of the tour to New Zealand in 1985. Akram had not played First-Class cricket but he was a precocious talent. Hafeez had picked up 10 wickets against New Zealand when they had toured Pakistan only a few months earlier. He played the first Test at Wellington and picked up five wickets for the fourth time in his career. He also bowled 48 overs for his five-for.

Pakistan dropped Iqbal Qasim and Wasim Akram made his debut in the second Test at Auckland. Hafeez and his understudy Akram opened the bowling for Pakistan after the visitors were dismissed for a woeful 169 in the first innings. Pakistan were hammered and New Zealand scored 451. Hafeez picked up three for 157 in 47 overs and Akram picked up two wickets for 105 runs in 34.4 overs. Pakistan lost the game by an innings and 99 runs.

It was a do-or-die game for Pakistan in the third Test at Dunedin. It is in this game Akram showed his class. He bowled fiery spells in both the innings and picked up 10 wickets in the Test. Pakistan narrowly lost the game by two wickets. Hafeez could only pick up three wickets in the game. Akram’s exploits kick-started a special career and he went on to become country’s leading fast bowler and blue-eyed boy. Hafeez was lost in obscurity after Dunedin Test. He never played Test cricket for Pakistan thereafter.

Hafeez is memorable because he clambered a pinnacle: of playing Test cricket and never let the misfortunes of his handicap affect him one bit. The spirit exhibited by him is earnest of adulation and emulation.