Mahendra Singh Dhoni has been the epitome of calmness which has earned him the sobriquet of ‘Captain Cool’.

Mahendra Singh Dhoni has been the epitome of calmness which has earned him the sobriquet of ‘Captain Cool’. But, off-late, he seems to be losing his famed calmness. In the 2015 Indian Premier League (IPL), he called an umpire’s decision “horrible” at the presentation ceremony and got fined 10 percent as a result.

Then, in the first ODI against Bangladesh last week, he shoved Mustafizur Rahman, who was in his way while he [Doni] attempted a quick single. Mustafizur got injured in the process. And  the Indian captain, yet again, ended up getting fined. This time, 75 percent.

And on Sunday, at the end of the second ODI of the ongoing series against Bangladesh, he sarcastically offered to quit captaincy. Bishan Singh Bedi criticised Dhoni and said his loss of composure were signs of a restless mind and body. Bedi suggested yoga as a remedy.

Bedi’s opinions pleased Prime Minister Narendra Modi, who had a super successfully inaugurated the International Yoga Day on Sunday. In his speech on Sunday, Modi mentioned, “I believe that from the 21st of June, through the International Day of Yoga, it is not just the beginning of a day but the beginning of a new age through which we will achieve greater heights of peace, good will and train the human spirit.”

The Indian PM, despite his busy schedule, is abreast with India’s downswing in fortunate and feels that what Team India needs is yoga. Our source over PM Modi saying, “Our good old captain seems to be losing his calming influence on the team. What we need is a yoga coach and not a cricket coach. I shall talk to Jaggu ji [Jagmohan Dalmiya] and ask him to immediately appoint Baba Ramdev as the yoga coach for Team India.”

Ramdev is an active BJP supporter and according to our sources in the BCCI, this suggestion by the PM has been welcomed by the board secretary Anurag Thakur, who himself is a BJP member. Thakur believes that Ramdev’s appointment will not only help Dhoni regain his composure but at the same time increase BJP following inside the Indian team.

Dhoni’s recent traits of aggression and the International Yoga Day seem to be having an impact on Indian cricket. For now, stay calm and believe in Modi.

MS Dhoni and Mashrafe Mortaza: What they said, what they meant after first ODI 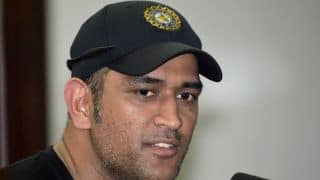