Born October 15, 1994, Mohammad Babar Azam is an international cricketer, who represents Pakistan Cricket Team. Azam is often considered to be among the talented bunch of opening batsman and promising player for Pakistan. Azam has impressed one and all with his performances since his Under-19 days. He was the leading run-scorer in Under-19 tri-series which included Sri Lanka and Bangladesh in 2009 and then captained the side in 2012 ICC U-19 Cricket World Cup. Despite being opener in domestic and U-19 cricket, Azam bats mostly at No. 3 for Pakistan across formats. On his birthday, Abhishek Kumar takes out 10 interesting facts about this talented batsman from the neighbouring country.

Azam was appointed as captain to lead Pakistan in ICC U-19 World Cup in 2012. Azam was the leading run-scorer for Pakistan with 287 runs from six matches at 57.40 and second highest run-scorer overall in the tournament. Pakistan reached quarter-final of the tournament where they were beaten by India by one-wicket.

Azam is first cousin of famous Pakistan cricketers Kamran and Umar Akmal. Azam once revealed in an interview that he has been helped a lot by his cousins at home.

During a post match show after the first of the five One-Day International (ODI) against England at Abu Dhabi in November 2015, Azam said to Rameez Raja that Hafeez advised him to play straight and he follows that. In return, Rameez instantly asked the young lad to follow the advice but do not follow Hafeez’s way of running between the wickets.

Azam made his international debut in the third ODI against Zimbabwe at Lahore in May, 2015. Batting at No. 4 on his debut, Azam scored 54 off 60 balls, which included four sixes.

Azam was expected to make his Twenty20 (T20I) debut by playing in Asia Cup 2016 and ICC WT20I 2016 but got injured and was replaced by Sharjeel Khan. Azam was ruled out from the tournament after facing a fracture on his left forearm during the practise session in Pakistan Super League (PSL) 2016.

During the first ODI against England at Abu Dhabi in 2015, Azam showed an excellent example of fielding by a stunner from Moeen Ali s bat at short midwicket. Off the fourth ball of 36th over, bowled by Yasir Shah, Moeen played a pull shot, which was hit quite hard and Azam plucked the ball out of thin air by leaping towards his left and grabbing a screamer. That was truly an amazing effort by Azam. Later, England gave the target of 217 to Pakistan, which they chased down with the help of Azam’s 62-run knock.

As per Azam, his favourite century is his first one, which he scored in the first ODI against West Indies on September 30, 2016 at Sharjah. He scored 120 from 131 deliveries, which included eight fours and three sixes. Later, Pakistan won the match by a huge margin of 111 runs and Azam was adjudged with Man of the Match.

In his debut T20I match for Pakistan, a funny incident took place for the 22-year-old on the field. Off the fourth ball of 20th over of first innings, England s Moeen hit the ball towards extra-cover and while the ball was in air, Azam tried his luck to catch it but in the process, twisted his ankle and was not able to stand. His teammate and senior pro, Shoaib Malik, carried him off the field which evoked laughter in the dressing room. Pakistan had the last laugh in the game as well, winning the match convincingly by nine wickets.

Azam became second cricketer to make his Test debut against West Indies in October 2016 in a day-night encounter after Mitchell Santner. Along with Azam, Mohammad Nawaz also made his debut in the same Test. Like his ODI debut, Azam scored an impressive fifty here also in the first innings. He departed for a well made 69 runs, thus showcasing his skills in the most gruelling format as well. 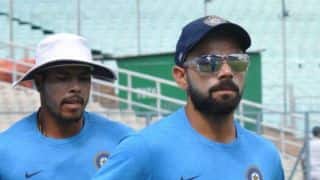