Bangladesh will be one of the six representatives from Asia in ICC Cricket World Cup 2015.

Bangladesh will be one of the six representatives from Asia in ICC Cricket World Cup 2015. This time they are going into this mega event without much expectation, probably because of the conditions Down Under. Still, owing to their expertise in giant killing, Bangladesh will be an interesting side to watch out for. Sandipan Banerjee analyses the strengths, weaknesses, and key players of this unpredictable team.

Mashrafe Mortaza-led Bangladesh are all set to start their campaign in ICC Cricket World Cup 2015. The Asian side is placed in Group A of the along with the teams like Australia, New Zealand, Sri Lanka, England, Afghanistan and Scotland.

Apart from the ever-supportive and over enthusiastic Bangladesh fan, no one is giving much of chance to this team, keeping the challenging conditions Down Under in mind. This can be a blessing in disguise for them as they can play their cricket without any pressure of expectations, which might bring the best out of them. Let’s have a look at their strengths and weaknesses:

Strengths: The biggest strength of this Bangladesh side is their unpredictability and surprise factor. Their 15-member squad features quite a few extremely talented names such as Shakib Al Hasan, Mashrafe Mortaza, Tamim Iqbal, Mushfiqur Rahim, Taskin Ahmed and a few more. On their day, if most of the team members put up a collective performance, this team can beat any team of the world. But problem with them, that day comes very rarely. But in upcoming ICC Cricket World Cup 2015, lack of expectations might charge them up and bring out the best out of them.

Another strength for Bangladesh is their brigade of spinners they have in their ranks, especially the left-arm spinners. Their squad has six quality spin bowlers and they can be a dangerous bowling side given the fact that the pitches are expected to be on the slower side for the World Cup. Beside this, their main player Shakib’s recent experience of playing in Big Bash League (BBL) will be hugely beneficial for them.

Weaknesses: Lack of experience of playing in the conditions of Australia and New Zealand is the major weakness Bangladesh is carrying into this ICC Cricket World Cup 2015. Most of their players hardly played Down Under, and adjusting with the bouncy wickets can be a barrier for them. Other teams will be looking forward to bounce out the short Bangladeshi batsmen. Apart from that, another long-standing weakness for Bangladesh cricket is their self-belief. Sometimes they don’t back themselves to win. This tendency may cost them in future. 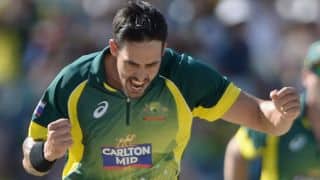