The Mashrafe Mortaza-led team has couple of surprises.

Bangladesh announced their 15-men squad for the ICC World Cup 2015 on Sunday. The Mashrafe Mortaza-led  team has a mixture of youth and experience. Sandipan Banerjee analyses the Bangladesh squad for the big event.

When Bangladesh co-hosted the ICC World Cup 2011, the local media went on to portray them as contenders considering their strength on home soil. Bangladesh disappointed during the tournament. Though they beat England, Ireland and Netherlands, their defeats to West Indies, India and South Africa had a heavy bearing on their fortunes. Four years down the line, Bangladesh enter the World Cup with a dangerous squad, but one that will have to contend with challenging conditions Down Under.

The Asian side is placed in Group A of the ICC World Cup 2015 along with the teams like Australia, New Zealand, Sri Lanka, England, Afghanistan and Scotland. So to cross the hurdle of the first round, Bangladesh need to beat one of the big boys. But on the bouncy wickets in Australia and New Zealand, it will be tough for them. But still they have to remain optimistic. The 15-member squad picked by the Bangladesh Cricket Board (BCB) gives the fans a reason to be optimistic.

The Mashrafe Mortaza-led team has couple of surprises. Inexperience cricketers like all-rounder Soumya Sarkar and and left-arm spinner Taijul Islam have found place in the squad while the veteran, Abdur Razzak has been axed. Both Sarkar and Taijul have played only one One-Day International (ODI) each so far. This clearly suggests that the selectors are ready to back youngsters for the big event.

The batting will mainly depend on the trio of Tamim Iqbal, Mushfiqur Rahim and Shakib Al Hasan. Whereas the youngsters like Anamul Haque, Mominul Haque and Nasir Hossain have to play the supporting role. Their bowling attack looks quite impressive and it has variety too. Apart from skipper Mashrafe Mortaza, the team team has young and talented pacers like Taskin Ahmed, Al-Amin Hossain and Rubel Hossain. This pace attack will be handy on those seaming and pace-friendly conditions. Shakib , Arafat Sunny, Taijul and Mahmudullah Riad will do the spinning duties.

Apart from the ever-supportive and enthusiastic Bangladesh fan, not many expect them to do well. This can be a blessing in disguise for them as they can play their cricket without any pressure of expectations, which might bring out the best out of them. Getting through to the next round is a huge challenge, but competing with the stronger teams could be a good result for them. Unless they pull a rabbit out of the hat! 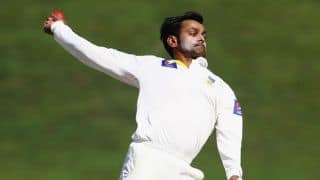