Bangladesh are being termed as the No. 2 team in Asia following India, which means the pressure will be on them to do well in ICC World T20 2016.

If the success that Bangladesh earned in 2015 can be termed a stepping stone, they managed to carry on with their mojo this year by qualifying for the Asia Cup T20 2016 final. Before setting up their final against India, Bangladesh thrashed the likes of Pakistan, Sri Lanka and UAE to display their prowess at home once again. There are no doubts that Bangladesh are certainly one of the most improved teams in international cricket at the moment, and they are considered a bigger threat than Pakistan and Sri Lanka in ICC T20 World Cup 2016 by cricket experts. FULL CRICKET SCORECARD: Bangladesh vs Netherlands, ICC T20 World Cup 2016, Round 1 match

Both Pakistan and Sri Lanka are struggling with their basics, but Bangladesh’s has been a success story. Many would say they always had the talent and the fire, but only recently, under the captaincy of Mashrafe Mortaza, they have been able to make a real difference with their performances.

The wins over India, Pakistan, South Africa and Zimbabwe in ODI cricket in 2015 should now be left behind, from which Bangladesh should only draw inspiration to keep growing. Bangladesh have burgeoning talent across departments, and all they need to do is to keep walking the right path which they have attained after so many years of wilderness in international cricket.

Bangladesh’s problems in the past were confined majorly to application and execution, but they seem to have overcome these. No longer can Bangladesh be taken for granted, or as walkovers, since they have acquired the necessary skill set — especially with the mental part sorted out. Mashrafe Mortaza has been challenging his wards to perform even beyond what they can imagine, and Bangladesh have reaped benefits of this change in approach.

ICC T20 World Cup 2016 presents Bangladesh yet another chance to keep taking giant strides. Recently, at an event in New Delhi many former cricketers rated Bangladesh as the No. 2 team in Asia following India, which means — for once — the pressure will be on them to do well. And as far as preparations are concerned, playing Asia Cup T20 2016 final was a proof that Bangladesh are on the right track in the shortest format as well.

Tamim Iqbal has returned to the side, as has Mustafizur Rahman, which implies Bangladesh are full strength. Al-Amin Hossain has been a revelation ever since he has returned with a remodelled action, and there are no injuries at the moment. It has been a near-perfect build-up for them.

Unfortunately, they will have to go through the first round to qualify for the next. Bangladesh are in the the Group A with Ireland, Netherlands and Oman, battling to qualify for the main tournament. Only one team will advance to the next round and with their expertise, firepower, current form and knowledge of the conditions, Bangladesh are expected to have an easy journey into the main tournament that begins March 15. 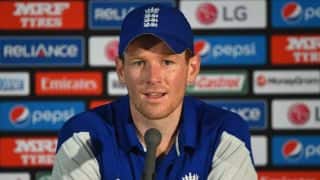