As Gillespie got to his double ton on his birthday, Australia declared for 581 for 4.

Bangladesh, confident after their performance in the first Test of the series, headed to the second and final Test of the home series against Australia. Though they did not win it, a score of beyond four-hundred against one of the best teams was surely a mental boost for Habibul Bashar s side. Bangladesh prepared themselves for Jason Gillespie s deliveries, what they never expected was the bowler would go on to slam his first Test century and convert it into a double hundred.It was the last Test of his career as he never got picked again.

In search of a similar first innings total as in the first Test, Bangladesh elected to bat at the Zahur Ahmed Chowdhury Stadium, Chittagong. Gillespie, who had made a comeback into the Australia XI with the Bangladesh tour, quickly removed Javed Omar, centurion from previous match,ShahriarNafees and in-form skipper Habibul Bashar. It all happened within 8 overs of the innings and Bangladesh were left reeling at 17 for 3. It was not until RajinSaleh took the crease that it seemed like they could even go past 100. His 71 and Khaled Mashud s unbeaten 34 were the only mentionable scores in a first innings total of 197. Gillespie, Shane Warne and Stuart MacGill, all were happy to bag 3-fors each.

It was time for Australia to put up a mammoth. Mathew Hayden opened batting with Phil Jaques, with Michael Hussey dropping down to middle-order. Hayden and Jaques put up a partnership that added in excess of 70 runs but with around 8 overs remaining for stumps of opening day, Hayden went down the track for a heroic loft, only to give a catch to Alok Kapali, the substitute fielder, and get out for 29. Ponting, not to lose any more wickets before stumps, sent Gillespie. He survived, remaining unbeaten at 5.

What happened next was beyond anyone s expectation. Jaques departed for 66 the next day as Mohammad Rafique bagged his second wicket. Ponting scored a gritty half-century but was run out soon after. Gillespie, completing his maiden Test century, approached towards 200.

Michael Hussey looked more than comfortable batting in the middle, a position he resorted to later on. In between Ponting and Hussey s wickets, Australia s score leapfrogged from 210 to 530. Hussey added 182. As Gillespie got to his double ton on his birthday, Australia declared for 581 for 4.

Compared to the attractive Australia scorecard, Bangladesh s looked bleak. Nafees played another heroic knock of 79 on the face of death, partnering with Bashar who continued with his form to score 49. Rafique contributed with bat too, adding a 65 down the order. He was only the second batsman to score a half-century in the innings. Bangladesh were bundled for 304 as MacGill again took home too many wickets. Warne got a 5-for. Gillespie, probably too elated, did not take a single wicket in the final innings of his Test career. Australia won the Test by an innings and 80 runs. 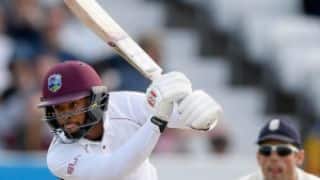