England are at the No. 4 spot in ICC Test rankings and will like to whitewash Bangladesh in this series to not only climb up the ladder but also remain in positive mindset ahead of the five-Test series against India in November 2016.

Bangladesh and England lock horns for the longer format after the One-Day International (ODI) series ended with visitors wining 2-1. England will mean business as the two-Test series will be a dress rehearsal for them before their next tour in India. England s youngsters will like to bank upon this tour to cement a place in the team before the competition gets tougher with India being the next opponent. The first Test will be played at Chittagong with Alastair Cook coming back to leading the Test side. He will also become the most capped Test player for his side with this game. Here is a look at England s probable XI for the opening Test by Aditya Sahay: Full Cricket Scorecard: Bangladesh vs England 1st Test at Chittagong

Top-order: Cook will lead the side not only with his captaincy but also with the bat. For long, Cook has been the only regular opener while his partners have kept on changing from time to time. Alex Hales has backed out of the tour due to security concerns while England have tried Gary Balance, James Vince and many others to partner Cook. England have brought in Haseeb Hameed and he may get a run at the top-order along with Cook. The right-hander has been in prolific form in the domestic front and will like to cement his place in the squad ahead of India tour. The spinners in Bangladesh s rank which test him to the fullest before he can make a mark.

Joe Root will join the squad after missing out on the three-ODI series and continue to bat at No. 3. Root is England s best bet with the bat and will be eager to pounce on the Bangladeshi bowlers in the subcontinent where he possesses a good record along with Cook.

Middle-order: England have enough firepower in the middle-order with newcomer Ben Duckett coming in at No. 4. Duckett has impressive in the ODIs with 123 runs in three matches which included two fifties at 41. Jonny Bairstow will come to bat at No. 5 followed by in-form player Ben Stokes. Bairstow will come ahead of Stokes to keep the right hand and left hand combination going in the middle. Stokes, on the other hand, has been in good form in Bangladesh with a hundred and vital innings in final ODI to help his side clinch the series. He will feel confident of going about his business with both bat and ball.

Lower-order: Moeen Ali will come at No. 7 followed by in-form all-rounder, Chris Woakes at No. 8. Woakes and Moeen have added enough depth to England s batting order which has rescued them from precarious situations in the recent past. 39-year-old, Gareth Batty, will come at No. 9 followed by pacers, Stuart Broad and Jake Ball.

Bowlers: England s bowlers have always been their main strength in whites. England will be without their premier pacer, James Anderson, but still have it in them to run through Bangladesh s side and take 20 wickets. They have three genuine all-rounders in the form of Moeen, Stokes and Woakes. All three of them are in good touch and know the conditions well by now. Broad and Ball will spearhead the pace attack. Ball made his ODI debut in the 50-overs series against Bangladesh and bowled in good lines. It will be a test for the youngster to pick wickets in the subcontinent with the red ball which helps spinners more. Batty will be their genuine tweaker who is making a comeback into the Test side after a long gap of 11 years.

All eyes will be on the veteran as to how he shines and exploits the conditions on offer. Overall, England have not much to dwell upon in all three departments and will be confident taking on Bangladesh in their own den. England are at the No. 4 spot in ICC Test rankings and will like to whitewash Bangladesh in this series to not only climb up the ladder but also remain in positive mindset ahead of the five-Test series against India in November 2016. 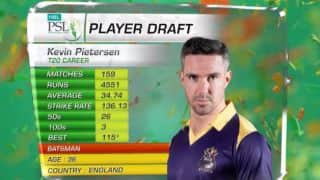 Bangladesh vs England, 1st Test: Players to watch out for from hosts camp