Bangladesh vs England, ODI series: Marks out of 10 for victorious visitors

Bangladesh vs England, ODI series: Marks out of 10 for victorious visitors

England have achieved something that the more reputed and famed cricket countries in the world could not manage in years, triumphing over the roaring tigers Bangladesh in a three-One-Day International (ODI) by a margin of two game to one.

England have achieved something that the more reputed and famed cricket countries in the world could not manage in recent times. Visitors triumphed over the roaring tigers Bangladesh in a three-One-Day International (ODI) series by a margin of two game to one. Teams like India, Pakistan, South Africa and Afghanistan had all tasted defeat in the 50-over format during their respective tour of Bangladesh. Bangladesh on the other hand, had been invincible at home much to the jubilation of their home fans, unbeaten in a bilateral ODI series since November 2014, were finally dethroned of their porch after England handed them a 2-wicket defeat in the final game of the series. The series was tied 1-1 after England won the first ODI, and Bangladesh showcased superior skills in the second to make the series finale a blockbuster affair. FULL CRICKET SCORECARD: Bangladesh vs England, 3rd ODI at Mirpur

This tour was in question after security concerns were raised by various authorities which promoted few of England’s leading cricketers to back-out, namely their ODI skipper Eoin Morgan. England’s most trusted batsman Joe Root was rested for the ODI leg of the tour , opening up an opportunity for the selectors to try out newer players on the trip. Jos Buttler was elevated to the post of captain, while Ben Stokes was announced as his deputy. Amongst the changes Jake Ball, Sam Billings, Liam Dawson and Ben Duckett were named in the touring party. England were given a 50-50 chance of doing well on the tour with so much tension around and a platter of inexperienced players in the side, visitors’ drew first to blood winning the inaugural ODI by a margin of 21-runs. Bangladesh did not take it lightly and came back with all their fight (like literally) winning the second ODI in a battlefield type scenario by 34-runs.

It all boiled down to the third and final ODI which the visitors came on top and achieved a memorable series win 2-1. For England it was a series which highlighted newer stars for the future while dampning a few careers in the process.

Let us have a look how each and every player in the England team fared on the tour starting with skipper Buttler.

Jos Buttler: He would have been nervous about the series, but to everyone’s surprise did not show any signs of it during the first ODI against Bangladesh. Buttler was sharp in his captaincy in bowling changes and field placement. Buttler was consistent with the bat in all the matches making 145 runs in the series with 2 half-centuries to his name. Apart from that heat of the moment exchange on the field with Bangladesh players, Buttler had a successful outing overall.

Ben Stokes: Stokes who has been in the news ever since the ICC WT20 final, finally showed that why is known around the world as a hard-hitting all-rounder. Stokes made the Bangladesh bowlers canter all around the park to remain the highest run scorer in the series for them, and the only one to have a ton marked against his name.

Adil Rashid: A bowler who outfoxed the hosts time and again was Adil Rashid. Rashid has always been an economical bowler for England in the 50-over format but on spin friendly pitches he became a monster. Rashid picked up as many as 10 wickets to help his team bundle out the hosts in quick time. Rashid picked up 4 wickets in the all-important finale.

Sam Billings: Coming in place of the injured Jason Roy, Sam Billings played an absolute cracker of an innings in the 3rd ODI. Billings smashed 62 off 69 balls, which helped England, chase down a target of 278 runs with ease. Billings knock was belligerent and calming at the same time.

Jake Ball: Fresh from a hat-trick in county championship, Jake Ball proved why he could very well be the next big thing in the England bowling outlook. Ball provides England with pace and bounce, which was crucial against Bangladesh. Ball did not disappoint his country, picking a 5-for on debut to help his team attain a much-needed win.

Ben Duckett: Another player who got his due is Ben Duckett. Duckett has been a run-monger in the county circles. With famed players being rested or opting out Duckett took his chance with open arms and staked his claim. Duckett in his first ODI scored fluent half-century, following it with match-winning 63 in the final match. In the third ODI Duckett showed he has a calm and cool head on his shoulders.

Jason Roy: Jason Roy was instrumental in providing England with brisk start, which he did in the first ODI making almost run-a-ball 41. Roy had been a flop in the Test series versus Pakistan at home had the perfect chance to redeem him, but could not do so thanks to an injury, which forced him to stay out of the series final. Roy is an important cog in England scheme of things.

Jonathan Bairstow: Jonny Bairstow was in red-hot form in the Pakistan series would have looked for some more run to add in his kitty, but was left disappointed. Bairstow was no-show in all the matches accumulating only 50 runs in the 3-matches he played.

James Vince: Another player who is in-line for a permanent slot in the ODI format for England, James Vince would have wanted to make an impression in the series. Starting poorly with the bat, Vince played an important knock in the 3rd ODI, making 32 from 37 balls to provide his team with an impetus. Apart from that one innings, Vince was anything but charming to the eye.

David Willey: David Willey has been touted as the next big all-rounder in international cricket had a rather appalling series. Willey was poor with the bat and ball, contributing to absolutely nothing towards the team’s cause.

Moeen Ali: Moeen Ali would have expected to do great in Bangladesh given the conditions, turned out to be a blip. Moeen could manage just 11 runs at an average of 3.66, which does not justify his talent. With ball too, he was impact-less managing only the one wicket apart from having a scary average of 143.00.

**Liam Plunkett played just one match and bowled a solitary over hence rating him on that would be unfair. 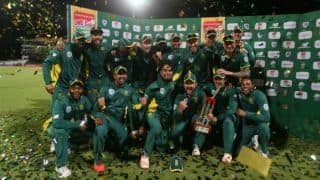 South Africa vs Australia: Marks out of 10 for the emphatic hosts