After losing the first One-Day International (ODI) against England of the three-match series at Mirpur, Bangladesh will come out hard to win the second encounter on Saturday and square the three-match series with a game to go. Bangladesh fought brilliantly in the first game but failed to finish off the game as they lost it in the final few overs. They will be itching to get back on the field and seek revenge for the previous defeat. They looked on course but lost the track as a result of which they floundered. English bowlers did well to pull things back in their court and reaped fruitful results for their hard work. FULL CRICKET SCORECARD: Bangladesh vs England, 2nd ODI at Sher-e-Bangla Stadium, Dhaka.

Batting first, England scored 309 in the first innings riding on Ben Stokes’ century and a much-needed cameo from skipper Jos Buttler. They batted extremely well after stumbling in the middle. Bangladesh got off to a shaky start as Tamim Iqbal floundered early on in the innings. Imrul Kayes played a memorable innings but was not able to carry his team over the line as wickets kept tumbling in the end. Kayes scored a century and continued his good form to guide Bangladesh closer to the total. Shakib Al Hasan chipped in with some valuable runs and was playing with unmatched confidence, in fact, the partnership between Shakib and Kayes was the most fruitful one as it almost turned the game in their favour.

With the second game turning out to be a do-or-die one for the hosts, one can expect them to give it all and bounce back emphatically. The crowd was blissfully entertained with a nail-biting encounter and one can expect another thrilling encounter out in the middle. It’s a virtual final for them and we present you with the possible XI for this high-voltage encounter:

Top-order: With Imrul Kayes smashing a ton in the first encounter, it is highly unlikely that Soumya Sarkar will make it to the side as Tamim Iqbal and Kayes will open the batting for Bangladesh. Iqbal’s blade was silent in the first innings and will be hoping to it to fire in the second game as Kayes has been in magnificent form and if Iqbal accompanies him, Bangladesh will off to a flying start, which will be an added advantage. England bowlers will certainly be in a lot of trouble if these two get going. Bangladesh will be banking on these two to make the most of the new ball in the powerplay overs.

Sabbir Rahman will continue to bat at three as the right-handed batsman looked good at that position in the first game. He was dismissed for 18 and was unlucky to get out in this manner as he played a good shot, which was caught by Jake Ball at the boundary. It was some tremendous athleticism, which brought an end to Rahman’s innings. He has the potential to play long innings at a brisk pace.

Middle Order: Bangladesh have a formidable middle-order but looks slightly out of touch. the likes of Mahmudullah, Mushfiqur and Shakib Al Hasan inspire confidence and can win matches on a given day. Mahmudullah got out after getting a good start in the first game and will look for revival of fortunes in the next game. The right-handed batsman got a tenacious 25 in the first game and will look to add some more to his name in the decisive game.

Mushfiqur Rahim’s willow too has not yield the amount of runs his team would have preferred to. The explosive batsman can put the opposition under the pump with his maverick approach and is well capable of changing the course of the game in a span of few overs. His return to form is crucial for the Bangladeshi side and this would be the ideal platform for him to do so. Shakib played well in the first game and will look to continue his good form in the second game as well. He wasn’t able to finish things off in the previous encounter as he was dismissed at the wrong time. He would certainly look to play a longer innings, which will be beneficial for his side.

Lower-order and bowling: Mosaddek Hossain and Mashrafe Mortaza are well capable of chipping in with some valuable runs lower down the order. If the top-order collapse, they can surely contribute some runs lower down the order. Mosaddek looks promising with his off-spin but failed to make any impact in the first game. With England having a lot of left-handers in their batting line up, Mosaddek can have a role to play. Mortaza on the other hand is a pinch hitter and can hit some big hits if needed.

Their pace battery hails of the likes Mortaza, Shafiul Islam and Taskin Ahmed. In Mortaza, they have some experience while Taskin spills fore with the ball. Shaiful bowled decently in the first game and had two wickets to his name and will look to d well for his team when they need the most. Mosharraf is another spinner in the line up as Bangladesh have enough variation in their spin department with Shakib and Mosdadddek. They have a well-balanced team and will look to rectify things, which went wrong in the first game. Their batting needs to step up as England have a heavy and powerful batting. And one can expect the venue to be batting friendly. As of now, all eyes are set on Dhaka as they second game unfolds on Sunday. 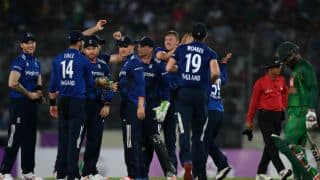 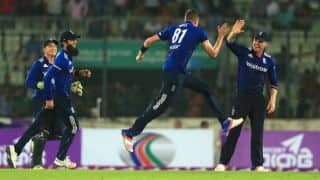