For England, the defeat might serve them a taste of what could be set to come their way in India, but before that, let us take a look at how Alastair Cook and his men performed in the two-Test series:

In retrospect, a Bangladeshi win in either of the two Tests against England was inevitable. It was not the case of the hosts punching above their weight and creating an upset; like almost every other Test side they carry all the rights to win at home and that is what they have achieved, by hammering England with more than 100 runs at Mirpur. After coming agonisingly close to winning the first Test, the hosts suffered heartbreak, but only to end the series on a high and telling the world that slowly but steadily, the Bangladeshis are getting among very best. In both the Tests, Bangladesh played terrific cricket. FULL Cricket Scorecard: Bangladesh vs England, 2nd Test at Mirpur

While in the first Test a few individual brilliant shows came in Bangladesh s way, the hosts ensured that the second Test had performances from their side ensuring that the results was in their favour. The 19-year-old Mehedi Hasan was the difference between the two sides throughout the series, and it was only in the second Test that he was able to pull off a favourable result for his team. For England, the defeat might serve them a taste of what could be set to come their way in India, but before that, let us take a look at how Alastair Cook and his men performed in the two-Test series:

Alastair Cook (3/10): The England captain may have scored a face-saving half-century in the fourth innings of the second Test, the fact that his failure to provide England the stability will be closely observed going into the India tour. The daddy hundreds have anyway stopped coming from Cook s bat, and despite spending endless hours with impeccable concentration, Cook is not able to make a difference to the scoreboard. Cook scored 89 runs in 2 Tests at a poor 22.25 with one fifty. Even his captaincy remained unimpressive, with England making an unwanted change in form of Zafar Ansari coming in for Gareth Batty, who was among the wicket-takers in the first Test.

Ben Duckett (2/10): The left-handed opener had a forgettable series which was his first in international cricket. He did score a fifty in the final innings of the second Test, but his inexperience and technique were at display against preying Bangladeshi spinners, who had the last laugh every single time. Duckett s performances of 92 runs in 2 Tests at 23, with one fifty, do not warrant him a place on India tour.

Joe Root (4/10): The English batting mainstay could not do much, as despite trying his best, the right-hander could manage only 98 runs in 2 Tests at 24.50 with one half-century. Root was down with a stomach bug which gave England some restlessness, and exposed the fact once again that they rely too much on him.

Gary Balance (1/10): England s patience is yet to run out as far as the left-handed batsman is concerned. Barring the India series in 2014, there is hardly anything that Ballance has enjoyed in the international circuit. Despite his flaws with technique and poor mindset, England threw him into the No. 4 spot. Ballance made a poor 24 runs in 2 Tests at 6, which means his position will be in danger when the India series begins.

Moeen Ali (7/10): The star England all-rounder showed his worth in the two-Test series. In the two Tests, Moeen scored 92 runs with a highest of 68, and ended the series as the fourth-highest wicket-taker from either sides with 11 scalps. While Moeen remains England s best performing spinner, his lack of runs in Test cricket will continue to haunt them when they arrive in India for a five-Test series.

Ben Stokes (8/10): The all-rounder did not deserve to be on the losing side. He scored 128 runs at 32 in the two Tests, and ended with 11 wickets. Stokes will be the key for England in the India series, since he showed mettle with both bat and the ball. Stokes will not only be expected to chip in with both bat and ball in India, but also to move the ball around. His knock of 85 in the final innings of the first Test was the reason why England won the Test.

Jonny Bairstow (7/10): Another cricketer who did not deserve to be on the losing end in the final Test. Bairstow was England s second highest run-getter with 126 runs, and his innings of 78 in the first Test was enough to solidify his team s position in the first Test. However, Bairstow will be tested on the turning wickets, and he will have to do some hard work on that front.

Zafar Ansari (3/10): Ansari will have to showcase more control with the ball, as he was a little wayward on the match s final day when Bangladesh were batting. He claimed 2 wickets in the second innings of his debut Test.

Chris Woakes (7/10): The all-rounder scored 110 runs in the two Tests and claimed only 3 wickets. For England to have success in India, they will have to learn to swing the ball, and Woakes remains one of the key candidates to do that.

Adil Rashid (6/10): With 79 runs with a highest of 44 not out and 7 wickets in the two Tests, Rashid was one of the good performers for England. However, a lot more will be expected from the leg-spinner when they arrive on Indian shores.

Stuart Broad (3/10): The senior England bowler claimed 2 wickets and scored 23 crucial runs in the first Test he played at Chittagong. Set for his 100th Test a Rajkot, he will be overburdened with responsibilities as Jimmy Anderson is missing a major part of the India tour.

Gareth Batty (6/10): The veteran England spinner did not deserve to be dropped after making international comeback. Batty was at his best in the first Test at Chittagong, taking 4 wickets. Batty will remain key player for England in India, as spinners hold the key in the subcontinent.

England players Jake Ball and opener Haseeb Hameed did not feature in any of the two Tests. 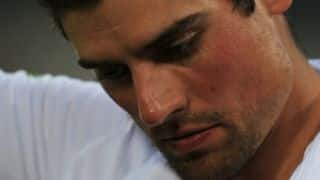