The Day Three saw the New Zealand batsmen take control on a benign pitch that had absolutely nothing for the Bangladeshi bowlers.

The first Test at Basin Reserve in Wellington has witnessed nothing but carnage from batsmen in three days of cricket. Bangladesh and New Zealand batsmen have chanced their bats to great result, knocking hundreds and a double hundred at will. The Day Three saw the Kiwi batsmen take control on a benign pitch that had absolutely nothing for the Bangladeshi bowlers. Their spinners were taken to task and made to look ineffective on this wicket. New Zealand, riding high on their batsmen, were able to muster 292 runs on the board in reply to Bangladesh s first innings total of 595 for 8 declared. Let us have a sneak-peek into the best highlights from Day Three:

Kane Williamson s onslaught: Coming in at No. 3, Kane Williamson displayed no nervous energies in the middle. New Zealand were still 540 runs away from Bangladesh s total. Williamson took on the bowlers from the the time he arrived at the crease, thrashing boundaries at will. He drove off the front foot and back foot at ease against the pace of Kamrul Islam Rabbi.

Williamson did not shy away from letting out the pull shot from his arsenal, picking Subhasis Roy for a couple of crackling fours. In no time Williamson reached his fifty off 54 balls that included 8 fours. Williamson suffered a lapse of concentration after his fifty as he gave his wicket away on the score of 53 to Taskin.

Tom Latham s uncharacteristic century: Latham was arguably New Zealand s second best batsmen in India, but his play in the first session did not do his reputation any justice. Latham did not move his feet enough, and his innings witnessed a lot of inside edges, to his luck did not rattle the stumps. Latham played second fiddle to Kane Williamson and Ross Taylor.

However, Latham soon got into the thick of things, playing some exquisite drive and flicks. To Latham s credit, he stuck to his guns and mastered though to a potentially match-saving hundred. Latham brought up sixth Test hundred in 167 deliveries.

Ross Taylor s hurricane: Undeterred by the fall of Williamson, Taylor, making a comeback into the Test arena after an eye operation, looked in no trouble. Taylor slam banged a flurry of boundaries on the up early in his innings, which became a normalcy. Taylor drove, pulled and flicked to complete control.

Taylor s bat came down heavy on Shakib Al Hasan who got a taste of his own medicine, getting cracked for scintillating fours one after other.

One thing that was noticeable from Taylor s innings was he rekindled back to old stance. Rather than keeping the bat on the ground, Taylor held it high in the air, which helped him generate quick bat speed. Taylor could not make much of his start and perished for 40 off 51-balls.

Sabbir Rahman s quick-fire 50: With Bangladesh s eye set on the 600-run mark, Sabbir Rahman had his own goal in mind. With having 556 runs to play with, Sabbir took charge and permitted himself to his second Test fifty. In good form this tour, Sabbir blasted his way early on Day Three and treated the New Zealand bowlers with no mercy.

Sabbir smacked 7 blistering fours. His fifty came up in just 85 balls, which then saw skipper Mushfiqur Rahim declare Bangladesh s innings on 595 for 8. 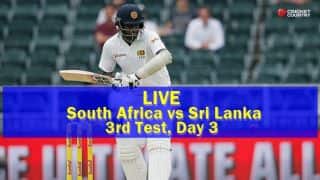