New Zealand did not give an inch to the unlucky visitors in the three-match Twenty20 International (T20I) series where they came out victorious by a margin of 3 games to none.

New Zealand continued their dominance in the shortest format of the game after clinching the One-Day International (ODI) series against Bangladesh earlier. The hosts did not give an inch to the unlucky visitors in the three-match Twenty20 International (T20I) series where they came out victorious by a margin of 3 games to none. This is also the second time on this tour that Bangladesh has lost a series without winning a single game (0-3 ODIs). New Zealand, led capably by Kane Williamson, batted with least difficulty while displaying very few gaps in the bowling department. This series win will give a young and a robust BlackCaps side ample confidence heading into their next limited-overs assignment against Australia. Let us have a read into how these players coped in the Bangladesh series.

Kane Williamson: Apart from donning the captaincy duties, Williamson lead from the front with the bat on most occasions. Williamson struck an eye-catching 73 not out in the first T20I while following it up with a durable 60 in the third. Williamson, with the ball, also showed his prowess picking up 3 wickets in the series.

Corey Anderson: After having poor outings early in the series, Anderson finally came into his self. Anderson stuck to his guns and blasted his way to a 68-ball 94 not out. Anderson wielded his bat to great extend knocking off 10 humongous sixes in the innings.

Colin Munro: Munro had a relative seesaw series, with scores of 0, 101 and 0. Munro recorded his way to a blistering ton in the second match that turned the game upside down in favour of New Zealand. Munro recorded his hundred in 54 balls which included 7 fours and as many sixes.

Tom Bruce: Called in for the injured Martin Guptill, Tom Bruce exhibited a sensible head on his shoulders. In the second ODI at Bay Oval, Bruce along with Munro helped their team out of a hole. Bruce remained unbeaten on 59 that showed his ability to anchor the innings as well.

Colin de Grandhomme: De Grandhomme s explosiveness in the first T20I was for all to witness. He smashed 41 runs off 22 deliveries to power his team to a remarkable win. De Grandhomme s show as a bowler was least impressive as he ended up picking just one wicket.

James Neesham: Known by all for his power hitting James Neesham was a rather dull show. Neesham could only muster 20 runs from two games, with a high of 15 runs.

Mitchell Santner: New Zealand s new age sensation Mitchell Santner did not rise to the occasion as expected in the series. Santner, in the 3 matches he featured in, picked up just 3 wickets. While with the bat, he proved to be a dud in the one innings he got to play in the middle.

Ish Sodhi: Economically on the higher end, Sodhi did manage to stifle the Bangladesh batsmen time and again at crucial junctures. Sodhi, in the two matches he played, picked up 5 wickets at 11.60. He was also the highest wicket-taker for New Zealand and second overall.

Ben Wheeler: In his debut series Wheeler showed great control with the white ball in his hand. He ended up playing all the games that only displayed confidence Williamson and the team management had in him. Wheeler ended up picking 4 wickets at 16.75.

Trent Boult: Boult had a rather off time in the series, giving runs away as ease. Boult was without his regular partner in crime Tim Southee, which meant he had to shoulder the bowling responsibilities. Boult ended up with just 3 wickets.

Luke Ronchi: Luke Ronchi played just one innings and that too got out on the first ball. Soon he injured himself to be ruled out of the third and final T20.

Lockie Ferguson: Ferguson made his debut in the first match of the series, ended up picking 2-wickets of the very first two balls in his international career. Given this is rarity in international cricket, Ferguson showcased great calmness. Ferguson s match figures read 3 for 32 in his four.

Neil Broom: Broom made an impressive start to his international career in the ODIs played just a solitary game in his series. Broom scored just 6 runs.

Matt Henry: Henry to his credit took the first T20I wicket of 2017.

Tom Blundell: After an injury to regular wicketkeeper Ronchi, Blundell was called in for the third and final T20I of the series. 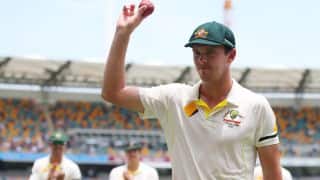 England begin training in India ahead of ODI series