Bangladesh vs Pakistan, 1st ODI at Dhaka: Tamim Iqbal’s century; his record-breaking partnership with Mushfiqur rahim and other highlights

Bangladesh eased past Pakistan in the first One-Day International at Dhaka and took a 1-0 lead.

Bangladesh get off to a steady start: Tamim Iqbal opened the innings with Soumya Sarkar and the duo had a cautious approach initially. They managed to put on 48 runs in 80 deliveries, but managed to weather the storm early on, which was crucial and in the process did not lose any wicket.

Pakistan strike back with quick wickets: Pakistan did not let Bangladesh build any momentum as they dismissed Sarkar and Mahmudullah soon to put Bangladesh in a spot of bother. Another wicket there would have put Pakistan well on top.

Tamim Iqbal dropped on 47: Tamim was given a lucky break when he was dropped by debutant Saad Nasim when he was on 47. Tamim hit the ball straight at the Nasim, who was the bowler, but the ball went between his fingers  It proved costly as Tamim would go on to score a big century .That is probably the moment Pakistan would rue the most.

Mushfiqur Rahim dropped on 35: Rahim was given a let off when an absolute sitter was dropped on 35 in the 29th over of the match. Mushfiqur went on to score a 77-ball 106, which crucial in determining the eventual outcome of the game.

Tamim Iqbal scores fifth century:  Tamim scored a magnificent century off 113 deliveries, to put Bangladesh in a commanding position. He eventually finished with 132 off 135 deliveries with 15 boundaries and three sixes punctuating his innings. He played well throughout and did not seem fazed by those loss of wickets in the earlier stage of the innings.

Tamim Iqbal-Mushfiqur Rahim partnership: Tamim and Rahim put on 178 runs for the third wicket, which is the highest partnership for Bangladesh in ODIs. Tamim and Mushfiqur played extremely well and set things up beautifully for the batsmen to follow.

Azhar Ali scores half-century on ODI captaincy debut: Azhar Ali opened the innings and scored a gritty half-century. He fell for a 73-ball 72 and had put Pakistan in a decent position after the loss of two quick wickets. He had an excellent partnership with Haris Sohail in the middle-overs.

Mohammad Rizwan scores fifty on ODI debut:  22-yead old Rizwan was given an opportunity to show off his talent today. He did just that as he managed to score 67 off 58 deliveries, which included eight boundaries. There was a glimmer of hope till he was at the crease, but his dismissal of 45th over proved curtains for Pakistan as they still needed 81 more runs to win.

Bangladesh win comfortably, take lead in 3-match series: Pakistan never looked in a position to win the match although there were sparks here and there. But Bangladesh put in a disciplined effort with the ball with Arafat Sunny and Taskin Ahmed picking up three wickets apiece. Bangladesh will be pleased with their all-round show and will want to carry on their good form in the other two matches of the series as well. 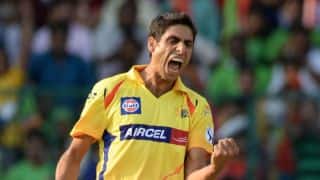