South Africa handed Bangladesh a 31-run defeat in the second T20 International (T20I) and clean swept the two-match series. Sandipan Banerjee takes a look at the game-changing top five moments of this match.

1. 95-run opening partnership between Quinton de Knock and AB de Villiers: Winning the toss was the biggest advantage South Africa got at the start of this game. The pitch had a lot of help for the spinners and ideally the spin-heavy Bangladesh side would like to bat first and put runs on the board to challenge South Africa. But ultimately South Africa batted first and had an excellent start. Their openers put on a 95-run opening partnership in just 63 balls. This gave the Proteas the necessary push in this important game. Both Quinton de Knock and AB de Villiers were in aggressive mood. They dominated Bangladesh bowlers in first 10 overs. READ: Leie’s dream debut sink Bangladesh

2. Bangladesh’s comeback through spinners: As the ball got old, in the second half of the South African innings, Bangladesh bowlers made a strong comeback. Between the 13th over to the 18th, South Africa could only managed to score 24 runs and lost one wicket. It seemed Bangladesh would restrict them to within 155-160. The spinners, especially Nasir Hossain and Shakib al Hasan bowled well during that period. READ: Bangladesh await their biggest test at home against South Africa

3. Strong finishing touches by David Miller, Rilee Rossouw: David Miller and Rilee Rossouw gave South Africa the necessary push in the last two overs. First, in the 19th over they hit Shakib for two sixes and took 19 runs from that over. Then, in the last over, Mustafizur Rahman was hit for 13 runs. These two overs were the turning point of this match. These 32 runs were crucial for the South Africans. READ: Shakib Al Hasan must step up to help Bangladesh be consistent

4. Soumya Sarkar’s shining start: Bangladesh were up to the task during their run chase. Thanks to a blazing knock by young opener Soumya Sarkar, the home team were in the game in the initial part of their innings. Soumya was hitting the South African bowlers everywhere. They tried to bowl short to him, but Soumya was equal to the task. After he got out for 37 of 21 balls, the Bangladesh innings fell apart quickly. Full Scorecard: Bangladesh vs South Africa 2nd T20I at Dhaka

5. Spells of Eddie Leie and other South African spinners: Eddie Leie the young leg-spinner from Potchefstroom, had a dream debut in this game. He took a wicket with the fifth ball in international cricket. He was using his wrong ones brilliantly. Soumya also failed to read one of those. At the end, Lelie finished with a figure of 3 for 16 and South Africa won the game and the series comfortably. For his efforts, he also won the Man of the Match award. Three South African bowlers took three-wicket hauls during the this game against Bangladesh, the first time for any team in T20I history. Photo Gallery: Bangladesh vs South Africa, 2nd T20I at Dhaka 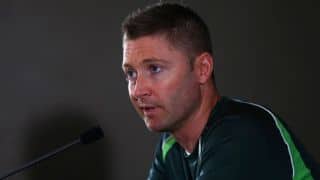 Michael Clarke: Australia will play 'hard but fair' in The Ashes 2015