Sri Lanka will lock horns with Bangladesh in first of the three-ODI series at Dambulla.

Sri Lanka will lock horns with Bangladesh in first of the three-ODI series at Dambulla. Both teams have squared off in 38 matches, with Sri Lanka having the upper hand with 33 wins, suggesting that Bangladesh have had a tough time against their subcontinent neighbours. However, the last time these two teams played an ODI series in Sri Lanka, the series drew 1-1, as the second matched was washed out due to rain. However, given the hosts won the second and final Test, they will look to avenge the loss and emerge triumphant in the 50-over format. Bangladesh, on the other hand, will look to continue the momentum and put Sri Lanka on the back foot. FULL CRICKET SCORECARD: Sri Lanka vs Bangladesh, 1st ODI

While Sri Lanka are placed at No. 5 in ICC ODI Rankings, Bangladesh are a place below them. Considering that ICC Champions Trophy 2017 is nearing, both teams will have to put their best foot forward to finalise their playing XI. All the same, let us now have a look at the key clashes for the series opener that are likely to keep the spectators on the edge of their seats:

Mustafizur Rahman vs Asela Gunaratne: Mustafizur would hope he does not pick up an injury with less than two weeks remaining for Indian Premier League (IPL) 2017. He was a sensation the defending champions Sunrisers Hyderabad (SRH) in the last edition, helping them clinch their maiden title in 2016. And playing against a batsman of Gunaratne’s class will be a good practice. Gunaratne was at his absolute best Down Under last month. He will be itching to continue his stellar form against Bangladesh as well.

Given both are likely to be pitted against each other in the death overs, it will be interesting to see who gets the better of whom.

Shakib Al Hasan vs Dinesh Chandimal: Shakib is now the No. 1 all-rounder across formats in ICC Rankings. Chandimal, on the other hand, is not even in the top 20 of ODI rankings, as he has not been at his best of late, also troubled with injuries.

Given Angelo Mathews is still out, the onus will be on Chandimal to provide impetus in the middle order. However, he will have to tackle the in-form Shakib’s slow-left arm to keep his team on course.

Tamim Iqbal vs Lahiru Kumara: Sri Lanka are very well aware of Tamim’s batsmanship. And if they are to make early inroads, pacer Lahiru will have to find a way to keep Tamim at bay.

Mashrafe Mortaza vs Upul Tharanga: This is the battle between the captains. However, if Mortaza opens the bowling, he will look to outplay the opposition captain with his natural incoming deliveries to southpaws.

Mushfiqur Rahim vs Lakshan Sandakan: Mushfiqur has been in a red-hot form of late. Coming to bat in middle order, he is likely to play against the Chinaman Sandakan. Given the tracks will assist spinners, Mushfiqur will have to play with caution if he to keep Bangladesh on course. Bangladesh vs Sri Lanka, 1st ODI at Dambulla: Likely XIs for both teams 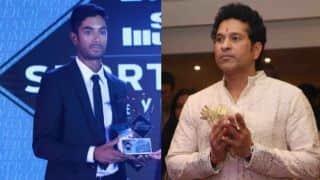