Bangladesh ended Day Four with 67 for 0 on the board against Sri Lanka at Galle.

Bangladesh ended Day Four with 67 for 0 on the board against Sri Lanka at Galle. The visitors are chasing 457 to win and need another 390 more runs to register a victory in the opening match. Though the target is massive, Bangladesh have exhibited positivity in attitude and batting. Most importantly, Soumya Sarkar (53*) and Tamim Iqbal (13*) are at the crease at stumps of Day Four and if they manage to continue throughout the first session of Day Five, Bangladesh can surely aim for a draw if not a victory. With Day Four s play coming to an end, here are the highlights: Full Cricket Scorecard: Bangladesh vs Sri Lanka, 1st Test at Galle

Upul Tharanga s century: Sri Lanka lost only a wicket in the first session with Dimuth Karunaratne departing for 32. The hosts resumed batting and lost another quick and crucial wicket as Kusal Mendis got out for 19. However, it was Tharanga who held the fort and brought up his third Test ton. Tharanga displayed good footwork en route 115 and his innings was studded with 11 fours and two sixes.

Soumya Sarkar s blistering fifty: Sri Lanka declared their innings with 274 for 6 on the board, setting Bangladesh to chase 457. However, Bangladesh showed character and did not back down. They started in a positive note. Sarkar, who scored 71 in the first innings, shone once again, scoring yet another brisk half-century. He slammed 53 off 47 and remained unbeaten at stumps of Day Four to provide Bangladesh the start they needed.

Rain, the villain again: While rain had forced the umpires to stop play on the third day, Day Four witnessed a similar condition as the umpires had to call for early stumps due to bad light. The overcast conditions resulted in yet another premature stop. 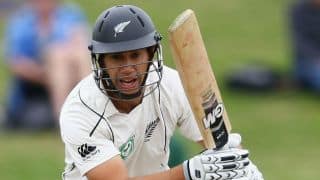