Dimuth Karunaratne's century was not only spectacular for a rather ordinary scorecard, but also timely, for Sri Lanka needed someone to fight at the crease and spend time amidst the fall of wickets.

Sri Lanka posted 268 for 8 on Day Four, as they played Bangladesh in the second and final Test at P Sara Oval, Colombo. Bangladesh started the day off on a high note, dismissing Upul Tharanga early in the morning, but Dimuth Karunaratne displayed maturity, holding his ground throughout the session. Bangladesh, however, had a brilliant second session, picking up 5 wickets but Karunaratne held the fort, scoring a ton that powered Sri Lanka to push the lead beyond 100. As Sri Lanka end the day’s play with a 139-run lead, here are the highlights from the day. FULL CRICKET SCORECARD: Bangladesh vs Sri Lanka, 2nd Test at Colombo

The crucial partnership: Sri Lankan innings got a major push from Karunaratne s knock, but there was hardly any threatening partnership. Nevertheless, the only mentionable partnership came was between Kusal Mendis and Karunaratne in the first session. The duo added over 50 runs to the scoreboard.

The century under pressure: Dimuth Karunaratne scored a brilliant century. It was not only spectacular for a rather ordinary scorecard, but also timely, for Sri Lanka needed someone to fight at the crease and spend time amidst the fall of wickets. He hit 10 fours and a six in his stunning knock.

100th dismissal in 100th Test: After Shakib Al Hasan s century, skipper Mushfiqur Rahim made the Bangladesh s 100th Test special, as his 100th dismissal as wicketkeeper came in this match. He took the catch to dismiss Niroshan Dickwella to get to the landmark.

1 session, 5 wickets: The second session of the day changed the course of the game completely. Just when Sri Lanka had a partnership built, Mustafizur struck twice to bring Bangladesh back in to the game. He dismissed both Kusal Mendis and Dinesh Chandimal within 6 overs. He later picked up the wicket of Dhananjaya de Silva for a duck. Shakib Al Hasan joined the party, getting rid of hard-hitters Asela Gunaratne and Niroshan Dickwella for single-digit scores. With the two bowlers taking charge, the Sri Lankan middle order was restricted with a very little contribution to the scorecard.

The confusing signal: In general, when an umpire nods to a bowler s appeal, it means he has given the batsman out. Well, on Day Four, the case was different as Aleem Dar primarily was seen nodding his head, but later confirmed that it was a not out. The replay also showed his finger en route to gesture out which he retracted quickly. 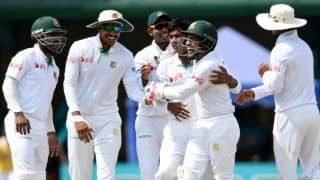