With momentum on their side after a four-wicket win against Bangladesh on Tuesday courtesy Shai Hope s unbeaten 146 off 144 balls, West Indies will hope for a repeat performance from their in-form batsman in the deciding third and final one-dayer at Sylhet on Friday.

The Windies, who lost the Test series against Bangladesh miserably, last bagged an ODI series in 2014 at home against Bangladesh and are desperate to end the drought. Since then, the Caribbean boys have lost 11 series with their best result coming in a draw against Afghanistan last year.

Hope single-handedly took the tourists across the line in Dhaka, and stand-in captain Rovman Powell, who scored just 1 in the previous match, will be keen to pile on significantly more if the visitors want to end their series drought.

Bangladesh will hope their senior plays capitalise on good starts. Tamim Iqbal, Mushfiqur Rahim and Shakib Al Hasan, who all registered half-centuries, will be livid with themselves after for scoring big. Same goes with Mahmudullah, who departed in the 41st over, the same time he shifts to the next gear.

Another area the hosts will need to address is their fielding. Bangladesh dropped three catches in the second one-dayer, both of Keemo Paul, who went on to add 71 runs for the seventh wicket with Hope, a match-winning partnership.

Where to watch: Star Sports 1 & HD (You can also catch LIVE coverage of the match on CricketCountry)

Weather: Partly cloudy with a high of 28 degrees

Imrul Kayes, who has registered scores of nought and zero in the previous two matches, may be axed for the decider which brings in Mohammad Mithun as the likely replacement. With the slight tinker, Soumya Sarkar will bat at No 3.

The visitors will not want to tinker with their match-winning squad which means Chandrapaul Hemraj will get another go.

Mustafizur Rahman is Bangladesh’s highest wicket-taker in ODIs this year with 29 wickets at an average of 20.58. Mashrafe Mortaza has taken 24 wickets, while Rubel Hossain has 23.

“We have come here to win the games. We came here to fight and make sure we finish the series 2-1.” West Indies batsman Shai Hope 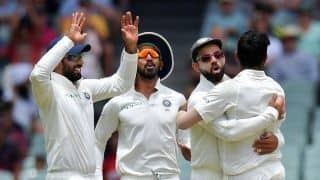 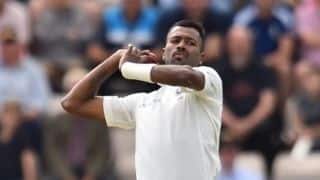