On March 23, 2002, cricket lost one of its most promising young players, Ben Hollioake, in a car crash. Jaideep Vaidya goes through the regrettably short life of the Australian-born former England international. 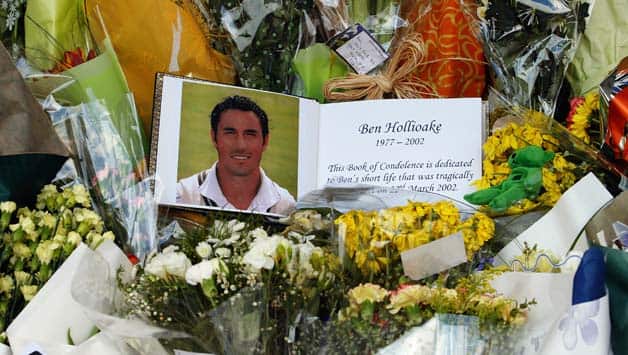 Flowers and a condolence book is placed at The Oval on March 27, 2002, as a mark of respect for Ben Hollioake, whose memorial service was held in Australia earlier that day © Getty Images

On March 23, 2002, cricket lost one of its most promising young players, Ben Hollioake, in a car crash. Jaideep Vaidya goes through the regrettably short life of the Australian-born former England international.

Ben Hollioake could be described by an assortment of adjectives and nouns: potential, effortlessness, jovial, stylish, gifted, man for the big occasion. Unfortunately, the most evident of words that has come to be associated with Hollioake is ‘tragic’.

At the youthful age of just 24, Hollioake lost his life while driving his Porsche on a freeway in Perth, Australia. It was the end of a promising cricketing career, one that had begun barely five years prior to the accident. It was the end of the aspirations of a talented all-rounder, one hailed as having tremendous potential, one hailed as being the next Ian Botham. It was the heart-rending end of the life of a doting son, a caring brother, a loving boyfriend and a competitive teammate.

Hollioake was born in Melbourne, Australia, on November 11, 1977, to an Australian father and an Indonesian mother. He was one among three siblings; his elder brother, Adam, also played cricket for England and captained the team. The Hollioakes moved to England when Ben was six years old. He had already begun playing cricket in Australia, following Adam, and took it forward after settling in Somerset with his family. In 1996, the Surrey county club gave him a trial in a Sunday League match against Leicestershire. Hollioake went on to take five for 10 and barged into the Surrey senior team. On his First-Class debut that same year, he claimed four for 74 against Yorkshire.

The aforementioned feats may give you the impression that he was a frontline bowler. No, not even close. Hollioake was an all-rounder, a batting one at that who could chip in with a few overs of medium-pace. In the end, it was his batting skills that got him a Three Lions debut in a One-Day International (ODI) against Australia at Lord’s in 1997. Hollioake had never before stepped on cricket’s hallowed turf. In fact, on his own admission, he had found it difficult to locate the dressing room and even the entrance to the field on his way out to bat!

Hollioake did find his way out to the middle and, perhaps, decided that he might as well stick around for a while after all the trouble finding it. On his third ball in international cricket, Hollioake drove Glenn McGrath straight down the ground with the timing and elegance of a seasoned pro. In the Australian quick’s next over, Hollioake tweaked the angle a bit and spanked him to the long-on fence. Shane Warne, much respected in those parts after bamboozling Mike Gatting a few years ago, was dispatched to the grandstand behind the mid-wicket fence. Holliaoke helped himself to 63 runs of just 48 balls and played a major hand in England chasing down 270 in 50 overs. Even though England pacer Darren Gough picked up the Man of the Match award for his five-wicket haul, Hollioake had won over the Lord’s faithful with his plucky, effortless innings. Here’s what he had to say in the post-match interview to David Gower:

A couple of months later, Ben and Adam Hollioake made their Test debuts in the fifth match of the Ashes at Trent Bridge. They were the fifth pair of siblings to play for England and only the third to make their debut together. It was a relatively modest debut for Ben, compared to his heroics at Lord’s; his efforts read 28 and two with the bat, and two wickets with the ball. Ben played just one more Test in his career.

It was the one-dayers and county matches where Ben thrived. His 532 runs in 20 ODIs may not make for impressive reading, not as much as his exploits in 75 First-Class matches that yielded 2,794 runs with a highest of 163. But Ben was thoroughly enjoyable to watch in those short spurts with the bat.

He struck the ball cleanly, fluently, and naturally. He was a good, agile fielder with great reflexes and made the hardest of catches look easy. Come to think of it, Ben Hollioake would have been a terrific Twenty20 player. It was thus really unfortunate that the shortest format of the game came into being a year after he passed away.

The fateful day came when the Hollioakes were having a family dinner at a fine-dine restaurant in their hometown Perth. Ben had just returned home from an ODI series in New Zealand. “We were getting ready to fly back [to England],” said Adam, in an interview later. “…it had become a bit of a ritual that we always took mum and dad out for a family dinner before we went back.” The meal ended shortly after midnight and the two brothers, who lived less than a kilometer apart in South Perth, left in separate cars with their respective partners. Ben turned right for the Narrows Bridge and the Kwinana Freeway, while Adam took the causeway and turned left.

Not 10 minutes after Adam reached his home that their dad called in with the news. On a night of light rain, Ben’s car had spun on the freeway exit and crashed into a wall. Janaya Scholten, Ben’s girlfriend, was critically injured and was rushed to hospital. However, Ben, just 24 years old, hadn’t made it.
News of Ben’s death reached the England team in the midst of their Test match against New Zealand at Wellington. Wisden Cricket Monthly magazine’s headline aptly summarised the outcome of the match, ‘The Test that ceased to matter’, as several thousand English fans in New Zealand went into shocked mourning.

Nasser Hussain, then captain of England, represented the team at Hollioake’s funeral. “Even away from cricket, he was there for you and it’s an absolute tragedy that such a young, talented outgoing lad has gone. He had everything going for him,” a tearful Hussain had said. Alec Stewart, another one of Hollioake’s captains, said, “Ben was the most naturally gifted cricketer that I have ever played alongside.”

However, the most fitting eulogy was delivered by the distraught Adam, when he described Ben as “a beautiful work of art, a classic sculpture”. A year later, Adam went on to launch Ben Hollioake Memorial Fund — a charity for life-limited children. Two years later, he announced his retirement from the game and returned with his family to live in Australia. His daughter, with wife Sherryn, is named Bennaya — a union of Ben and Janaya.

Photo Gallery: The tragic and untimely end of Ben Hollioake