Belonging to the third-largest ethnic group (after Han and Arabs), I understand the madness. Bengalis can go overboard with celebrations but perhaps that is what we are, and that is what defines us.

Thank you, England. Thanks for coming down. We will miss you. Come again, soon, read a Bangladeshi fan s message on social media after the sides’ 108-run win at Mirpur. In a social media world filled with sarcasm, this post can be perceived as one but not this. Fans from this cricket-fanatic nation are blunt and straight. Right or wrong, they wear their heart on their sleeves. The gratitude bit in this post and several others was pleasing, as it is an emotion the otherwise emotional Bangladesh fans lack, especially when it came to their immediate neighbours.

Over the past 16 years, Bangladesh have now won 8 out of their 95 Tests. They have lost nine times (72) more than what they have won, and this was their first against a top side. Five of their wins have come against Zimbabwe and two against West Indies. Why the hullaballoo? When cricket was far less commercialised, Sri Lanka a much smaller nation in terms of population made their Test debut in 1982, won a World Cup in 1996. And 16 years into Test cricket, they were winning Tests overseas. So, why this bedlam breaking lose in celebrations across Bangladesh when they have managed to level a series against an inexperienced England side?

Maybe it is the Bengali genes. When I say Bengali, I mean across borders and around the world. Belonging to the third-largest ethnic group (after Han and Arabs), I understand the madness. Coming from the Indian side of the border, I relate to the Sourav Ganguly mania. And I have been part of celebrations of Rabindranath Tagore’s literary genius or Satyajit Ray’s cinematic brilliances.

The verdict often is: nothing can match the Bengali might and intellect. Bengalis can go overboard with celebrations but perhaps that is what we are, and that is what defines us.

Alastair Cook’s countrymen in 1905 divided the Bengal of British India in basis of religion, which later led to West Bengal and East Pakistan in 1947 and eventually Bangladesh in 1971. The borders led to difference in religious choices, but the division could never affect the genes. Perhaps, more than anything else, the language (Bengali) connects us the most. Why else around 170 million Bangladeshis stand straight with their palms on heart to the Tagore-penned ‘Amar Sonar Bangla’ and millions across the border hymn with the melody. Bengalis, again on both sides, take pride and relate to Sunderbans and Royal Bengal Tigers.

So, when young Mehedi Hasan trapped Steven Finn leg-before, the moment led to the nation go frenzy. Perhaps, this was one Diwali where per-capita crackers burst was more in Dhaka than in Delhi, Mumbai, Kolkata combined.

Former Indian cricketer Raman Lamba, who breathed last in Bangladesh, contributed immensely to their domestic cricket in their pre-Test era. Another Indian cricket giant and a man from the other side of Bengal Jagmohan Dalmiya made massive contribution in elevating Bangladesh to Test cricket. The most celebrated administrator, Dalmiya was then the ICC President and oversaw things when Bangladesh became a Test-playing nation.

“I will remember this day for a very long time. When I was part of the team that played Bangladesh’s inaugural Test 16 seasons ago, I never thought we would see this day. Nothing tastes sweeter than winning a Test and that too against a top-quality side such as England. A win of this magnitude is bound to give us confidence when we tour New Zealand in the coming weeks for a Test series,” said former skipper Habibul Bashar to Times of India.

For a nation that has not achieved a lot in cricket and even otherwise, the feeling can be understood. Apart from their history of being a part of British India and later Pakistan, the fans have flocked to this sport as they find glimmer of hope in cricket, where their national team is amongst the 10 others who have the distinction of being called ‘a Test-playing nation’. Compared to other sports, their team stands a chance to at least compete in the globe’s second-most followed sport.

The fans have only grown in numbers and no denying they are a passionate bunch, who have stood by the side. Sometimes, the passion gets overboard and the emotions overflow. The rise, even if late, is well deserved and maybe the delayed ‘rise’ has led to the overflowing emotions.

When Bangladesh was not about Bengalis

India, a nation that has stood by their little neighbour, faced the brunt when they defeated Bangladesh in the ICC World Cup 2015 quarter-final. Rohit Sharma, who went on to score a match-winning hundred, survived a lucky escape early on. Poor decisions are a part of the game, but the common sentiment in Bangladesh was India arm-twisted their way to semis, taking advantage of their power as a cricket nation.

Effigies of Indian cricketers were burnt. Even their administrators made controversial remarks on India’s possible backdoor entry to semi-final. A few months later when Bangladesh beat India 2-1 in an ODI series, a major daily came up with an ad of half-shaved heads of Indian cricketers. From half-shaved heads to severed head of cricket legend MS Dhoni, the battles in social media got uglier.

Random incidents during my study years in New Zealand:

Tutor: So, where are you from?

Tutor: Oh yes, I get it. The little nation east of India.

Cashier: So you are from Bangladesh.

Cashier: So you speak Hindi too?

Ashraf: No. Our language is Bangla. Bengali.

Cashier: Oh ya, my son has been to Bengal. So you are near to Calcutta?

Some bit was understandable, for long they had lived under the massive shadow named India. At global stage the urge to prove yourself against the odds and create an identity is important. So the moment arrived where the giants were conquered, the emotions crossed the line.

India and Indian Bengalis in particular, who took pride in their little neighbour’s cricketing achievements, pulled back their support. The ones like me who has ancestral roots in Bangladesh or even otherwise, always took pride in Bangladesh’s success. Be it Mohammad Ashraful playing that blinder to down Ricky Ponting’s Australia or Shakib Al Hasan earning an IPL contract, we lauded our fellow Bengalis.

With heavy hearts, Kolkata still wished ‘good’ for the fellow Bengalis in Dhaka when a young Bangladesh side upset India in a group game in ICC World Cup 2007, a defeat that resulted in India’s exit. It was inspirational, not ugly.

The spate of recent incidents led Bengalis this side to deploy the nation-first mindset, drop the shutter and what added as the catalyst was the political and social situation in Bangladesh that saw a gradual rise in Islamic extremism and secularists being mercilessly hacked to death.

Supporting Bangladesh was not just Bengali.

Australia cancelled their Bangladesh tour in 2015 on the grounds of security. In fact, they did not even send the Australian Under-19 side to participate in the World Cup held there earlier this year. England, after a lot of contemplation, decided to go ahead with the tour, but Alex Hales and ODI skipper Eoin Morgan pulled off.

The ODI series and the tour games saw ugly instances between the two sides that almost led to physical altercations, but Cook’s men showed good maturity in the Test series. Joe Root, Cook and Stuart Broad were caught in the lenses commiserating Sabbir Rahman after the first Test.

“Full credit to Bangladesh for a brilliant series and I’m very pleased to lead a side out here. More teams need to come here and play,” said Cook, making a strong statement.

There were no trolls or unsavoury statements; in fact, majority of Bangladesh fans thanked Cook and the England side for touring them. This tour enabled Bangladesh to play a Test after more than a year’s time.

“Bengal beat Railways. Bangladesh beat England. This Kali Puja, Maa Dhakeshwari has blessed our Bengal,” remarked Subhro Chattopadhyay, a Bengali cricket fan from Dum Dum, a suburb of Kolkata. Dhakeshwari is the Hindu goddess after which the city of Dhaka, which has a over 90 percent population of Muslim, is named after.

“Sibling rivalries happen. They started, we gave back but let us forget, forgive and wish for each other’s good,” he added.

My good friend and ex-colleague Sandipan Banerjee, who has covered Bangladesh cricket for long, went to an extent of donning the Bangladesh ODI jersey and broadcasted himself live on Facebook hailing the side, who till not long back were considered ‘minnow’.

Another Bengali colleague Paulami Chakraborty sums up the emotion, “Bangladesh carries the emblem of the Bangla [Bengali] language. Winning against No. 4 Test side, England can be a turning point. Bengalis can emotionally connect to this and somewhere down, one cannot but praise this team for their effort for defeating the ones who play Tests regularly unlike Bangladesh.”

Down somewhere, this win has inspired most Bengalis, and the feeling is mutual across borders. The jibes and unwanted pleasantries seem to be dying a natural death. Good, let that prevail. Amidst her joys for the Bangladeshi win, Paulami makes an important point.

They held the upper hand against South Africa when they last played a Test series in mid-2015 before rains played a spoilsport. They had to wait for more than 14 months to play their next Test.

Bangladesh skipper Mushfiqur Rahim made his Test debut almost a year before his counterpart Cook’s. While Cook became a regular in 2006, Mushfiqur did the same from 2007 onwards. While Cook has played 135 Tests, Mushfiqur finally played his 50th Test. The fact well illustrates Bangladesh’s plight.

Bangladesh almost won the first Test at Chittagong; and had there been another Test, they would be sniffing a series win by now.

‘Better late than never’, Bangladesh have announced themselves as a Test force and get ready for many such scorelines especially when they play at home.

(Suvajit Mustafi consumes cricket for lunch, fiction for dinner and munches numerous other snacks throughout the day. Yes, a jack of several trades, all Suvajit dreamt of was being India s World Cup winning skipper but ended up being a sports writer, author, screenwriter, director, copywriter, graphic designer, sports marketer , strategist, entrepreneur, philosopher and traveller. Donning so many hats, it s cricket which gives him the ultimate high and where he finds solace. He can be followed at @RibsGully and rivu7.) 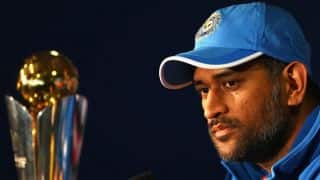