Every team playing eight matches against each other left the tournament wide open for contest. Though the charts were dominated by men from Pakistan, New Zealand, and England, other countries made their appearances as well. However, despite some excellent bowling performances, World Cup 1992 would probably be remembered, among other reasons, for the only World Cup that did not witness a five-wicket haul.

Martin Crowe’s impact as the leading batsman and the supreme strategist won him the Man of the Series award, the first of its kind in the history of the tournament. However, the presence of two Pakistanis in to five on both batting (Javed Miandad and Rameez Raja) and bowling (Wasim Akram and Mushtaq Ahmed) told the story.

Batting records: Crowe, as mentioned, finished as the leading run-scorer of the tournament, with Miandad finishing 19 runs behind. The tournament also saw Miandad edge past Viv Richards’ tally of 1,013 runs and finish on 1,029. Peter Kirsten was the only other one to finish in excess of 400.

The top four do not change from the previous table, but Neil Fairbrother, “The Englishman Who Refused to Get Out”, finished with an average of 57. He played a crucial role in England’s journey to the final.

Kapil topped the strike rates for the third consecutive time. Crowe himself made an appearance, as did Mark Greatbatch, a crucial cog of Crowe’s plan. With two outstanding innings in the semi-final, Inzamam-ul-Haq arrived on the scenario, albeit as a brutal hitter of the ball.

Bowling records: If Wasim was the bowler of the tournament, a 36-year old Ian Botham, well past his prime, was no less. With an average of 19 and an economy rate less than 3.50, Botham finished as joint second-highest wicket-taker to go with his explosive cameos at the top. Eddo Brandes made an appearance as well, which probably indicated how competitive the tournament was.

While the top three on the wickets chart remained intact on the averages chart, two entries — Manoj Prabhakar and Anderson Cummins — were from the non-semi-finalists. Once again, this proved the intensity of the contest.

Chris Harris, known more for his wicket-to-wicket slow-medium paced bowling with the occasional leg-break thrown in, finished joint second on the wickets tally — and first in terms of strike rate. Prabhakar and Cummins finished second and third.

The very fact that Dipak Patel was the most economic bowler of the tournament bore testimony to Crowe’s genius. That man Botham featured again, while Craig McDermott, leading wicket-taker of the 1987 edition, made an appearance.

Somewhat surprisingly, though there were eight four-wicket hauls (all by different bowlers), for the first time in history there was no five-for in an entire World Cup. Meyrick Pringle’s four for 11 against West Indies at Christchurch remained the best figures.

Fielding and wicket-keeping: Dave Richardson leading the glovemen’s list may not be surprising, but David Williams’ appearance probably was. Of the other non-semi-finalists, Ian Healy finished joint fourth.

Kepler Wessels finished at the top of the chart, followed by that man Fairbrother, but barring them there was no one who really dominated the list of catchers despite South Africa (led by Jonty Rhodes) taking the entire concept of fielding to another echelon.

Record partnerships: West Indies chased down a target of 221 against Pakistan at MCG without the loss of a wicket. Desmond Haynes and Brian Lara put up an unbroken stand of 175 before the latter had to retire hurt. Haynes and Richie Richardson ensured no other wicket was lost.

As it had happened often before, the five highest scores were all piled up against the two weakest teams — Sri Lanka and Zimbabwe. There was a catch, though: at New Plymouth Zimbabwe amassed 312 for four before Sri Lanka chased it down. They remained the only 300-plus scores of the tournament.

Pakistan were bowled out for a mere 74 at Adelaide Oval, but rain washed the match off after England were 24 for one in eight overs. The next two lowest scores came at Albury, were Zimbabwe were bowled out for 134 before Eddo Brandes routed England for 125. 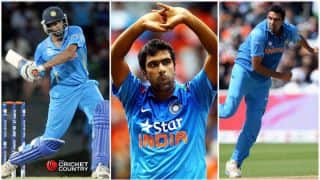