Betty Wilson was also the first woman to take a hat-trick in Test cricket.

A close look at the annals of the sport will reveal that many a record has been set by a woman first, only to be emulated by a man. One of them was scoring a century and taking 10 wickets in a Test match. On February 24, 1958, when England toured Australia and New Zealand, Elizabeth Rebecca Wilson, more popularly known as the Lady Don, became the first cricketer (men or women) to score a century and take 10 wickets in an international match. Sudatta Mukherjee looks back at the epic match that also marked the end of three-day women Ashes tours.

After the 1951 Ashes, when the result of the series ended in a draw, England women headed towards Australia to fight and win the Ashes back. In 1957-58, England toured Australia and New Zealand. England women played two Tests against New Zealand women before heading to Australia. The first Test match at Sydney was abandoned. England flew to Melbourne to play the next match with Mary Duggan as their captain.

The match was supposed to start on February 21 but no play happened. The next day the visiting team won the toss and decided to field first. A superb bowling performance by Mary saw Australia women‘s first innings end for 38. Mary ended the first innings with figures 14.5-11-6-7. England thought they had the match under their control.

The England innings was almost an encore of the Australian one: Eileen Massey removed Cecilia Robinson in no time. Shirley Driscoll followed her when Joyce Christ dismissed her for a duck. Betty Wilson was brought into the attack. She removed Betty Birch, Hazel Sanders, Mary Duggan and Polly Marshall quickly.

Betty Wilson had wrecked havoc into the English batting line-up. In the 30th over of the match, she removed Edna Barker, Joan Hawes and Dorothy Macfarlane with the first three balls, thus securing the first hat-trick in women’s cricket. Betty Wilson also reached the 50-wicket figure with her third wicket. She also picked up four wickets in five balls, with the wicket of Polly Marshall in the previous over and the hat-trick in the next over. Wilson burst into tears when she was informed that she had picked up a hat-trick.

England were bowled out within 30.3 overs. With an action like that of a medium pacer, Betty Wilson had picked up seven wickets. Australia managed a slender lead of three runs.

Australia women came out to bat again. The match had already seen 20 players dismissed in a day. For the second time in the day, Wilson came to their rescue. At the same time, England women were in no mood to give away the match so easily.

Mary Duggan was on a roll. She removed Nell Massey and Una Paisley in no time as Betty Wilson walked out. Australia led by 30 runs at this stage; 3 runs later, Edna Barker removed Mary Allitt as Valma Batty joined Wilson. Stumps were called after the first day’s play with Australia’s second innings at 66 for 4. The next day was a rest day. In total, the first day’s play saw 24 wickets fall.

Batty stuck around with Wilson for some time the next morning, scoring 43 runs, before she was removed by Joan Hawes. Australia might have been playing better than the first innings but their wickets were falling fast.

Meanwhile, Wilson stuck her ground there. She found support in Joyce Dalton, who helped Wilson put up 80 runs for the eighth wicket. Wilson took her time to reach her second Test century of her career and was dismissed a few balls later. Soon, Australia declared their innings for 202 for 9: England needed 206 runs to win with half of a day of game left.

England openers Cecilia Robinson and Shirley Driscoll put up a better show than their first innings, adding 34 for the first wicket. Ruth Dow then removed Shirley and followed with the wickets of Betty and skipper Mary.

Dow cleaned up the remaining wickets. At the end of the match, which ended in a draw, Dow and Wilson had taken 4 wickets apiece in England’s second innings. Dow’s 4 for 21 also marked her best bowling figures.

Wilson, the star of the Test, finished with 4 wickets at the expense of only nine runs. She had taken 11 wickets in the match, giving away only 16 runs from the two innings.

Betty Wilson was 37 at the time of the match. Her cricketing career was stalled by the World War II. Later on, in an interview to ESPNCricinfo, she said, I learned stuff by meticulous observation of good and great players. My heroes were from men’s cricket. I liked the way Ray Lindwall bowled, the casual atmosphere of Keith Miller, and adored the late cut of Lindsay Hassett.

In her debut Test against New Zealand, she had scored 90 runs and took 10 wickets. She was only 26. In her second Test, she had become the first cricketer to score century against England. She had picked up nine wickets in that match.

– Betty Wilson’s 7 for 7 is the third-best bowling figures in an innings.

– The series ended in a draw. Australia retained the Ashes.

– Realising that a three-day Test match was not really helping, from the next Ashes tour, three-day matches were taken over by four-day matches.

– Australia toured England in 1963 and the visitors won the series by 1-0, thus, they regained the Ashes. They retained it till 1984.

– In 1985 Lady Don went on to become the first woman cricketer to be inducted into Australia’s Sporting Hall of Fame. She was congratulated by Lady Bradman in person.

– In 2004, Shaiza Khan of Pakistan broke Betty Wilson’s record of 11 wickets in a match. She picked up 7 wickets in the first innings and 6 in the second against West Indies at Karachi.

– Even though she was the 25th woman player to have played for Australia, Betty Wilson got her Baggy Green somewhere in 2004-05.

– Betty Wilson has registered a hundred and five wickets or more in an innings thrice. 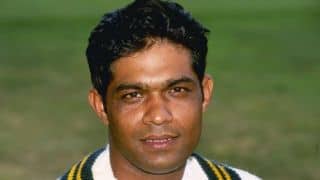